How to get IntelliJ to recognize imports in Scala script?

I'm having trouble getting IntelliJ to recognize Ammonite imports in my Scala script. This is a new feature, reported here, where there are also instructions. I followed the instructions and I started a new sbt project in IntelliJ to try it out, but it's not working.

The (quite simple) project seems to successfully build. I also specified that Scala worksheet files should be treated as "Always Ammonite".

All this, yet the IDE shows the script like:

What more do I need to do to get this to work?

I had similar issues with IntelliJ, so let me share how I made it work.

Now, I started from the same code as you have, with updated version of dependency 0.6.7.

Already now pressing the green arrow to next to 1st line runs Ammonite. The dependencies are downloaded and link is displayed. That is mandatory step for IntelliJ to recognize that new jar is available.

Also at this stage Intellij shows me a small popup with information that I can import the jar. I did not use it.

To make IntelliJ recognize the imports, I press Alt+Enter Show Intention Actions on the broken com.lihaoyi::scalatags:0.6.7 dependency and use Create library from jar...

This makes Intellij recognize the library, imports and it can start giving you hints.

The library is added to the Project's dependencies (Ctrl+Alt+Shift+s). You can see also dependencies coming from other files below.

I had similar issues with IntelliJ and seem to be figthing bugs in IntelliJ.

If I just open the .sc file without open project then I get prompted with

The notification quickly dissapears. If I click 'Add' button before fixing the JDK, the imports does not work, and the add button is gone. fix the jdk and scala, and then find the 'Add all Ammonite...' in the eventlog and click 'add' there, then it works.

However all changes in settings are lost next time I reopen IntelliJ.

Now IntelliJ remembers settings for sc-files. I can even open sc files directly from explorer/total commander in IntelliJ after configuring 'open with...' to intellij, though I prefer.

Do NOT allow IntelliJ to auto-import sbt project settings via notification, it seems to ruin the library imports, and I need to recreate project to recover.

The library auto-import 'add' button will only work for Scala versions for which Ammonite is released. See Maven Central Ammonite releases. At the time of writing Ammonite 1.2.1 is not released for scala-2.12.7, though the current unstable version of ammonite is. See Ammonite bug-report #879. The add button just fails silently, which sucks, esp. for a newbie like me.

This is how it looks in project settings after libraries have successfully loaded: 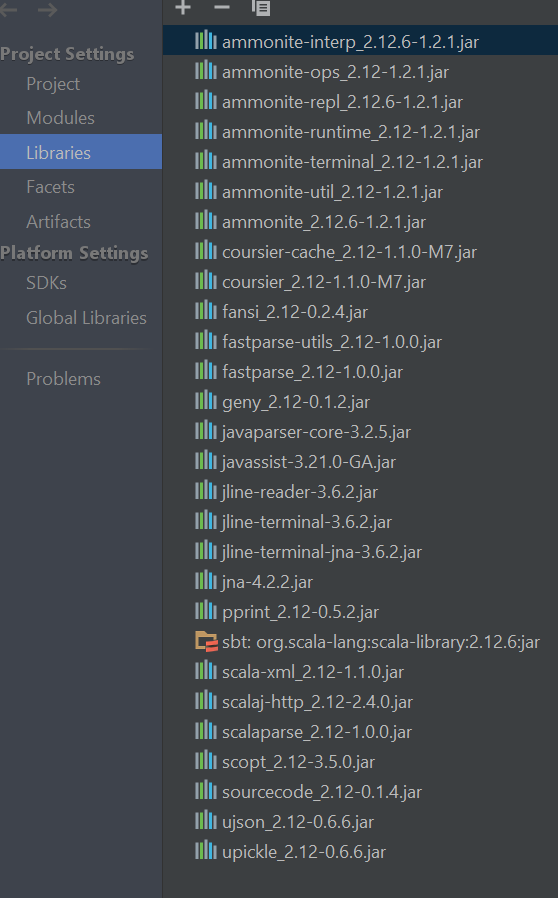 and here are the dependencies that make it compile. Note that the 'SBT : ' dependencies are those auto-generated via SBT-file (it seems), and the others are libraries added by scala plugin ammonite notifications feature 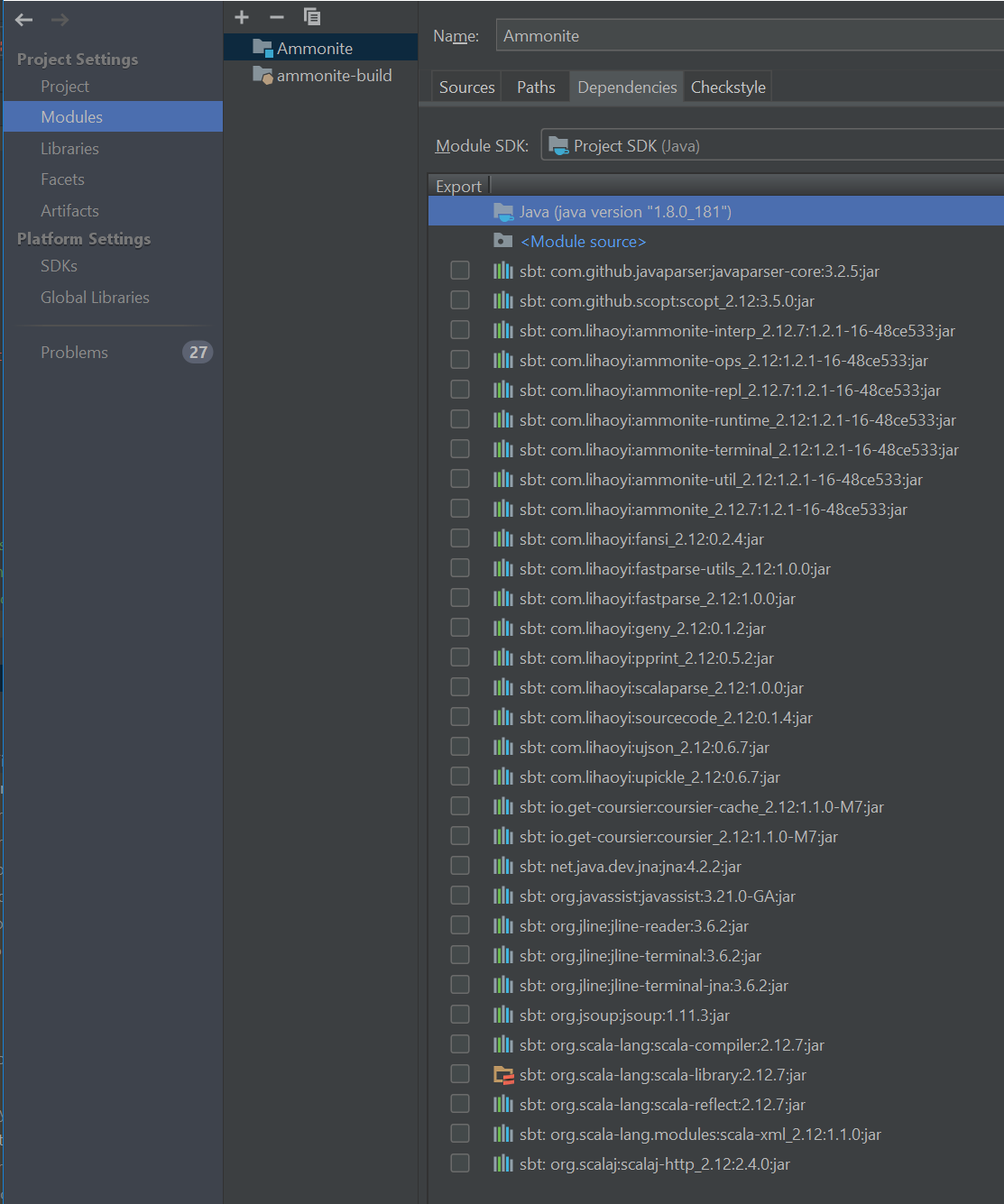 The above library list is empty when IntelliJ fails to load the ammonite libraries.

IntelliJ with SBT (because IntelliJ loses ammonite imports, and for $ivy)

IntelliJ seems to frequently for lose its ammonite imports. If I have SBT setup to give the imports, then it does not matter so much. Also IntelliJ $ivy support for ammonite only works when files are already cached locally in ivy-cache, and running Ammonite script on my windows caches files in different location, which means IntelliJ $ivy imports effectively does not work. Hence I use SBT to setup the sum of the imports I use in my scripts.

I think IntelliJ IDEA won't find a dependency in a local cache if you're working mostly with Scala 2.13 and SBT 1.3+ with the Coursier library management. We need to help IntelliJ IDEA by downloading dependencies to the Ivy cache.

I solved this issue by:

you need to associate .sc files with ammonite.

Not the answer you're looking for? Browse other questions tagged scala intellij-idea sbt ammonite or ask your own question.

1374
How can I permanently enable line numbers in IntelliJ?
705
IntelliJ: Never use wildcard imports
148
How to create SBT project with IntelliJ Idea?
66
What's recommended .gitignore for Scala/sbt project in IntelliJ IDEA?
95
How to build an Uber JAR (Fat JAR) using SBT within IntelliJ IDEA?
1
IntelliJ "No Scala version specified or detected" at new sbt project
0
IntelliJ not recognize scala imports
1
Inside IDE(IntelliJ), could not find sbt dependies from External Libraries