I have a list of posts that belong to a user. The posts are structured as linked list that belongs to a given user.

I am having deleting the a given node while preserving the data structure.

Here is an illustration of the structure. 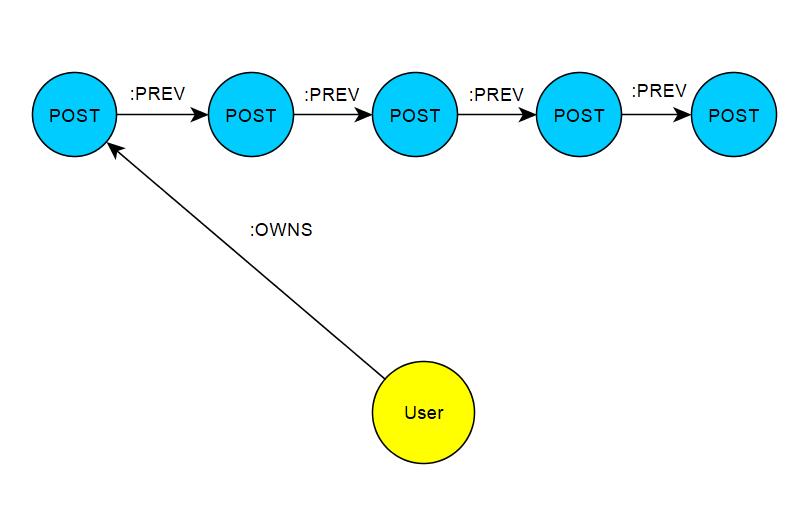 In my list attempt I have written the query below, however it does not work since the MATCH does not return anything in the sub-queries.

I thought about using OPTIONAL MATCH in the sub-queries, however that results in exceptions.

I assumed that if a pattern in a sub-query fails than the rest of the sub-query will be skipped and the next sub-query will still execute. But it seems that the whole thing does not get executed.

How do we perform something like in the following in sub-queries without halting the execution.

stdob--'s answer is the closest to the right solution, however it fails to delete nodes at the end of the list and throws an exception as it does not check if the nextNode exists in the second FOREACH statement.

It needed tweaking to work:

You can use combination of OPTIONAL MATCH, FOREACH and CASE:

Update: Also you can use the procedure apoc.do.when from the apoc.library for the conditional query execution.

I recreated your data set with the following query:

As you mentioned, using OPTIONAL MATCH can result in exceptions, something along the lines of:

However, you can work around this, by first doing the DELETE, then passing on the value using a WITH clause and only running the CREATE if the variable introduced by the OPTIONAL MATCH clause IS NOT NULL.

Not the answer you're looking for? Browse other questions tagged database neo4j cypher graph-databases cypher-3.1 or ask your own question.

1262
How to list the tables in a SQLite database file that was opened with ATTACH?
1
Get property of neo4j node with optional relationship like left join
0
Java with Neo4j Cypher
0
Neo4j : Syntax Error
8
neo4j - MERGE creates duplicate Node
0
Neo4j query with more subqueries
0
If statement for deleting in neo4j cypher
0
Add node to linked list after given node in cypher
0
Cypher find node in list structure without using FOREACH CASE WHEN