How does simply piping to the response object render data to the client?

In the example code in this article, how is the last segment of the stream working on the line:

I understand that the first part reading the file, the second is compressing it, but what is .pipe(res)? which seems to do the job I'd usually do with res.send or res.sendFile.

How does simply piping the data to the response object render the data back to the client?

† which I changed slightly to use express, and a few other minor stuff.

"How does simply piping the data to the response object render the data back to the client?"

The wording of "the response object" in the question could mean the asker is trying to understand why piping data from a stream to res does anything. The misconception is that res is just some object.

Internally, res.send actually just writes to the underlying stream it represents (itself). res.sendFile actually pipes the data read from the file to itself.

In case the act of "piping" data from one stream to another is unclear, see the section at the bottom.

If, instead, the flow of data from file to client isn't clear to the asker, then here's a separate explanation.

I'd say the first step to understanding this line is to break it up into smaller, more understandable fragments:

First, fs.createReadStream is used to get a readable stream of a file's contents.

Next, a transform stream that transforms data into a compressed format is created and the data in the fileStream is "piped" (passed) into it.

Finally, the data that passes through the compressionStream (the transform stream) is piped into the response, which is also a writable stream.

The process is quite simple when laid out visually: 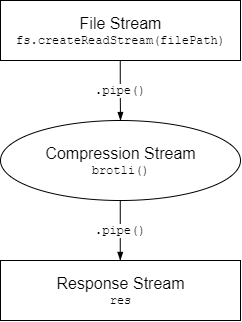 Following the flow of data is now quite simple: the data first comes from a file, through a compressor, and finally to the response, which internally sends the data back to the client.

Wait, but how does the compression stream pipe into the response stream?

The answer is that pipe returns the destination stream. That means when you do a.pipe(b), you'll get b back from the method call.

Take the line a.pipe(b).pipe(c) for example. First, a.pipe(b) is evaluated, returning b. Then, .pipe(c) is called on the result of a.pipe(b), which is b, thus being equivalent to b.pipe(c). 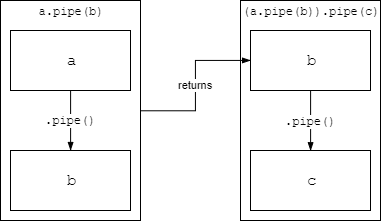 If the whole process still makes no sense, it might be beneficial to rewrite the process without the concept of streams:

First, the data is read from the file.

The fileContents are then compressed. This is done using some compress function.

Finally, the data is sent back to the client through the response res.

The original line of code in the question and the above process are more or less the same, barring the inclusion of streams in the original.

If you're confused about how streams work, here's a simple analogy: each type of stream can be thought of in the context of water (data) flowing down the side of a mountain from a lake on the top.

A convenient way of writing all data read from a readable stream directly to a writable stream is to just pipe it, which is just directly connecting the lake to the people.

This is in contrast to reading data from the readable stream, then manually writing it to the writable stream:

You might immediately question why Transform streams are the same as Duplex streams. The only difference between the two is how they're implemented.

Transform streams implement a _transform function that's supposed to take in written data and return readable data, whereas a Duplex stream is simply both a Readable and Writable stream, thus having to implement _read and _write.

I'm not sure if I understand your question correctly. But I'll attempt to explain the code fs.createReadStream(filePath).pipe(brotli()).pipe(res) which might clarify your doubt, hopefully.

How does simply piping the data to the response object render the data back to the client?

By itself, this does not "render", nor tell the browser what to do with the data. Before the piping, this happens: res.setHeader('Content-Type', 'text/html'). So the browser will see a header telling it that the content is HTML. Browsers know what to do with HTML: display it. So it will take the data it gets, decompress it (because the Content-Encoding header tells it it is compressed), interpret it as HTML, and show it to the user, that is, render it.

what is .pipe(res)? which seems to do the job I'd usually do with res.send or res.sendFile.

.pipe is used to pass the entire content of a readable stream to a writable stream. It is a convenience method when handling streams. Using .pipe to send a response makes sense when you must read from a stream to get the data you want to include in the response. If you do not have to read from a stream, you should use .send or .sendFile. They perform nice bookkeeping tasks like setting the Content-Length header, that otherwise you'd have to do yourself.

In fact, the example you show is doing a poor attempt at performing content negotiation. That code should be rewritten to use res.sendFile to send the file to the browser, and the handling of compression should be done by a middleware designed for content negotiation, because there's much more to it than only supporting the br scheme.

read this to obtain answer : Node.js Streams: Everything you need to know

so Node.js read the file and convert it to readble stream object fs.createReadStream(filePath). Then it give to iltorb library that create another readble stream .pipe(brotli()) (containing the compressed content) and finally pass the content to res which is writable stream. So nodejs call internally res.write() that write back to the browser.

Not the answer you're looking for? Browse other questions tagged javascript node.js filestream or ask your own question.

1666
How to efficiently count the number of keys/properties of an object in JavaScript?
1660
How to loop through a plain JavaScript object with the objects as members?
1367
How does the “this” keyword work?
1985
How does data binding work in AngularJS?
1031
How can I get the full object in Node.js's console.log(), rather than '[Object]'?
5853
How do I return the response from an asynchronous call?
1723
How does Facebook disable the browser's integrated Developer Tools?
0
How to send github OAuth data to client?