Cannot connect to the Docker daemon on bash on Ubuntu windows

I am able to install docker, docker-compose and docker-machine

However when I try to run

Is there any suggestion for solving this problem?

Running docker against an engine on a different machine is actually quite easy, as Docker can expose a TCP endpoint which the CLI can attach to.

This TCP endpoint is turned off by default; to activate it, right-click the Docker icon in your taskbar and choose Settings, and tick the box next to “Expose daemon on tcp://localhost:2375 without TLS”.

There are two ways to make this permanent – either add an alias for the above command or export an environment variable which instructs Docker where to find the host engine (NOTE: make sure to use single apostrophe's below):

The Docker client and server can now be installed and run purely in WSL without Docker Desktop for Windows if you are running Windows 10 version 1803 or greater. I have it working on the following WSL:

Simply follow the same instructions to install on Ubuntu but make sure to choose a specific version to install. Presently, version 18.06.1~ce~3-0~ubuntu works fine but later versions up to 5:18.09.6~3-0~ubuntu-bionic have an issue with starting up a container. The following command will install the latest working version:

To get the Docker server running in WSL after installation, close all open terminals and start a new Ubuntu terminal as administrator (i.e., right click the Ubuntu shortcut and click 'Run as administrator'). Finally, run the following commands:

sudo service docker start will have to be run each time Windows is rebooted. However, if you wish to avoid that, you can automate it using the Task Scheduler and a shell script by following the steps listed here.

Test that everything is working using:

for me this worked for WSL for windows:

assuming you have installed docker desktop for windows and Settings->General->Expose daemon on tcp://localhost:2375 without TLS is ticked

Note: if you are using the Ubuntu from WSL (Windows Subsystem for Linux), do understand that the docker client is working, not the docker server (daemon).

See Microsoft/WSL issue 2114 and this thread.

For the server, you would still need to use only Docker for Windows and its Hyper-V VM.

I was able to make TLS work from inside WSL by changing DOCKER_CERT_PATH environment variable (which I got from running eval $(docker-machine.exe env --shell bash)) from "C:\C:\Users\mmarchini\.docker\machine\machines\default" to "/mnt/c/Users/mmarchini/.docker/machine/machines/default/" .
At least docker build seems to be working now, I'll try using docker-compose later.

See this script (from Matheus Marchini) to launch a docker-machine bash with the right setting:

I had the same issue, took me so many hours to figure it, I realized that running docker ps without root privileges gives this error, If any one else is experiencing the same you could try sudo docker ps it worked for me

DO NOT USER OTHER METHODS IN LATEST DOCKER DESKTOP

I had the same "Cannot connect to the Docker daemon" issue when trying to use docker inside WSL2.

I believe this has been simpler in latest version of Docker Desktop. 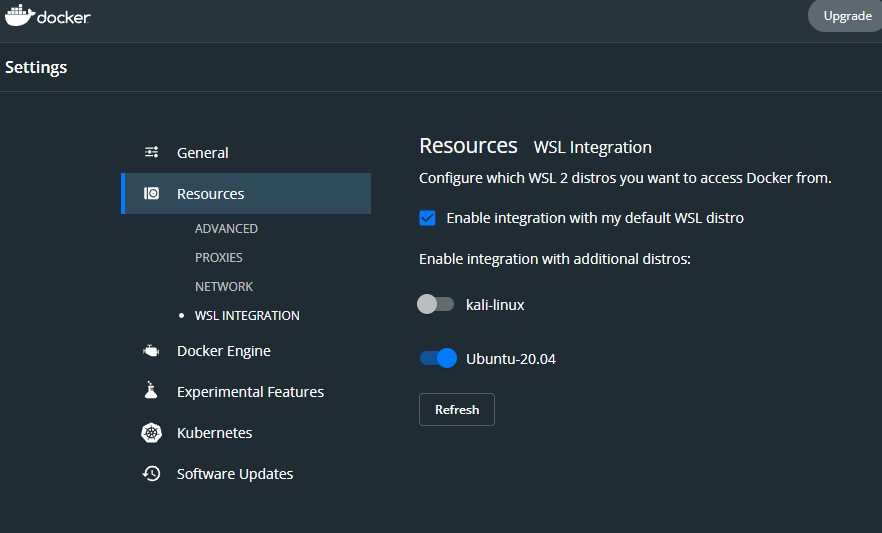 If you are using docker desktop for windows (and do not require TLS for the connection) then go to the docker desktop setting, general section and enabled the checkbox "Expose daemon on tcp://localhost:2375 without TLS".

Update: in newer Docker desktop versions the WSL integration has moved to the resources section.

The accepted answer is mostly correct. However, I wanted to specify that when using WSL2 + Docker Desktop:

Now, you can do a simple docker info to check if you're running the same server version in WSL and in Windows (Powershell).

In addition to what was already said, I would like to share with you some issues that I had while setting up and the solutions that eventually allowed me to start working with a WSL2/Docker Desktop combo. This is not a complete guide, just another source of troubleshooting!

How I went about it

Issues and their solutions

1. A few of the environment variables from the old Docker Tools installation remained. This caused Docker Desktop to misbehave.
Solution: I deleted all of them. (Any variable name that mentioned Docker)

2. When trying to connect to Docker on localhost:2375 via Ubuntu WSL2 got the famous "...is docker even running" error. Worth mentioning that on cmd docker was working properly at this stage.
Solution:

- Purge a previous installation of Docker I had on my Ubuntu WSL2.

- Make sure to delete all and any environment variables that mentioned Docker on my ubuntu WSL2.

- Install the latest version of Docker via `apt-get`.

Now running on Ubuntu WSL2 "docker context ls" to check my setup should result in:

only needs add a env variable in your system

9
Is Docker running within WSL or connecting back to Windows?
0
Docker not reachable on Arch Linux