When I type "Col·laborador" I get exactly this with other letter types:

but with Merryweather Sans, I get "Coll·laborador":

I use ttf-merriweather-sans 1.006-3 in ArchLinux

The problem lies in that font's OpenType definition.

Its author included a locl OpenType feature for the language code CAT (Catalan) that was supposed to replace the combination /l' /cdot' /l with /ldot. The ' characters after the first two names indicate what characters are to be replaced by the new one (http://www.adobe.com/devnet/opentype/afdko/topic_feature_file_syntax.html#5.e). However, the author made a mistake there:

and so it replaces just the dot character with ŀ. That means that you get this

with an OpenType-aware program such as Adobe InDesign (and only with the applied language set to "Catalan"). Note the double l, as in your own findings.

The output from another program confirms this; characters that do not take part of a replacement are in gray, replaced characters are in black. 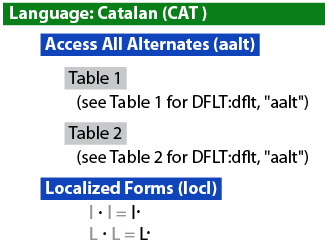 Both /ls are in gray, only the center dot is black. A correct definition should have shown the left hand l and L in black as well.

The font you link to is version 1.006; an older Merriweather Sans that I found (1.003) does not contain this particular OpenType feature and so does not display this error.

To fix it, adjust the OpenType code and regenerate it from its source, or contact its author. Contact details are on the Google Fonts page for this font. (I have left a message in there, referring to this question.)

Not the answer you're looking for? Browse other questions tagged archlinux truetype or ask your own question.

0
why do I get a 404 error when I want to install android-sdk via yaourt on my archlinux 64?
5
Convert fonts - TrueType (TTF) to PostScript Type 1 (PT1)
1
Why can not I use fcitx input method in gnome-terminal?
3
The entry point method could not be loaded
0
ZendPDF, rendering custom fonts
3
matplotlib does not detect font
2
matplotlib: Humor Sans does not displayed correctly accents
0
Getting Error on Importing Custom Fonts using SASS