How does Bitmap allocation work on Oreo, and how to investigate their memory?

For the past years, in order to check how much heap memory you have on Android and how much you use, you can use something like:

This means, the more memory you use, especially by storing Bitmaps into memory, the closer you get to the max heap memory your application is allowed to use. When you reach the max, your app will crash with the OutOfMemory exception (OOM).

I've noticed that on Android O (8.1 in my case, but it's probably on 8.0 too), the above code isn't affected by Bitmap allocations.

Digging further, I've noticed in the Android profiler that the more memory you use (saving large bitmaps in my POC), the more native memory is used.

To test how it works, I've created a simple loop as such:

On some cases, I've made it in a single iteration, and on some, I've only created a bitmap into the list, instead of decoding it (code in comment). More about this later...

This is the result of running the above :

As you can see from the graph, the app reached a huge memory usage, well above the allowed max heap memory that was reported to me (which is 201MB).

I've found many weird behaviors. Because of this, I've decided to report on them, here.

But, as opposed to the heap memory check, it seems that the max native memory changes its value over time, which means I can't know what is its truly max value and so I can't, in real apps, decide what a memory cache size should be. Here's the result of the code above: 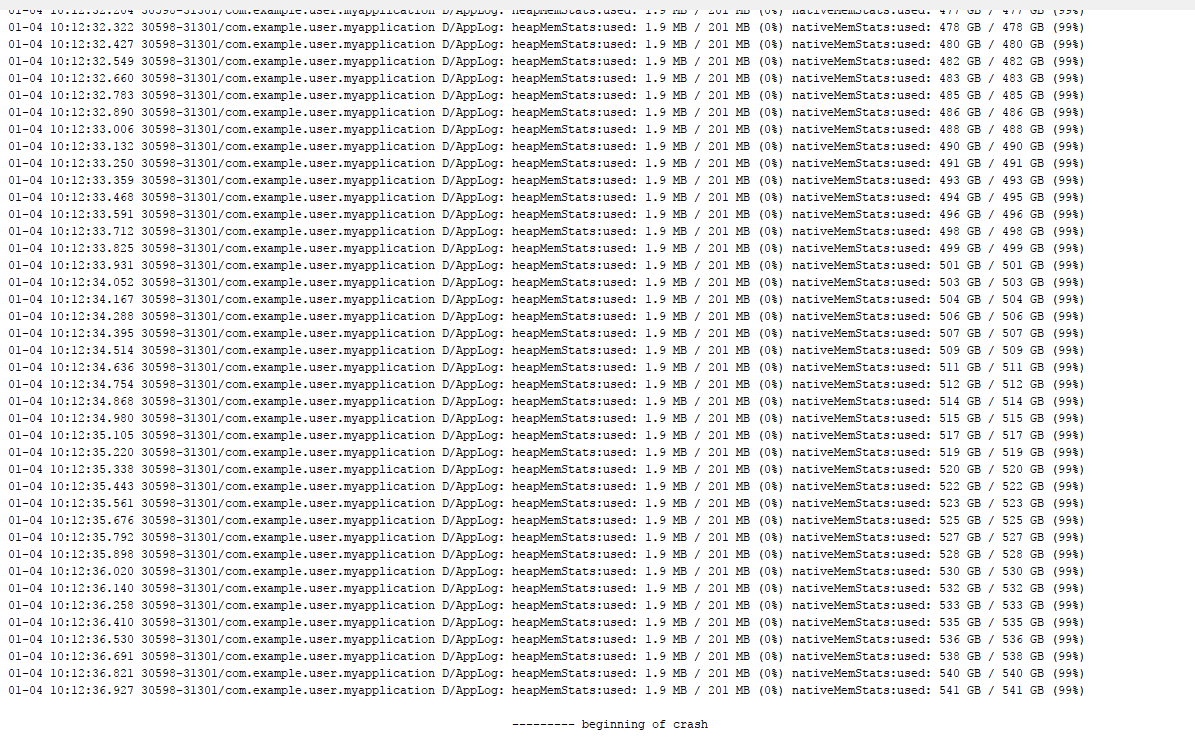 Also, as opposed to when I decode bitmaps, I do get a crash here (including a dialog), but it's not OOM. Instead, it's... NPE !

Looking at the profiler graph, it gets even weirder. The memory usage doesn't seem to rise much at all, and at the crash point, it just drops:

If you look at the graph, you will see a lot of GC icons (the trash can). I think it might be doing some memory compression. 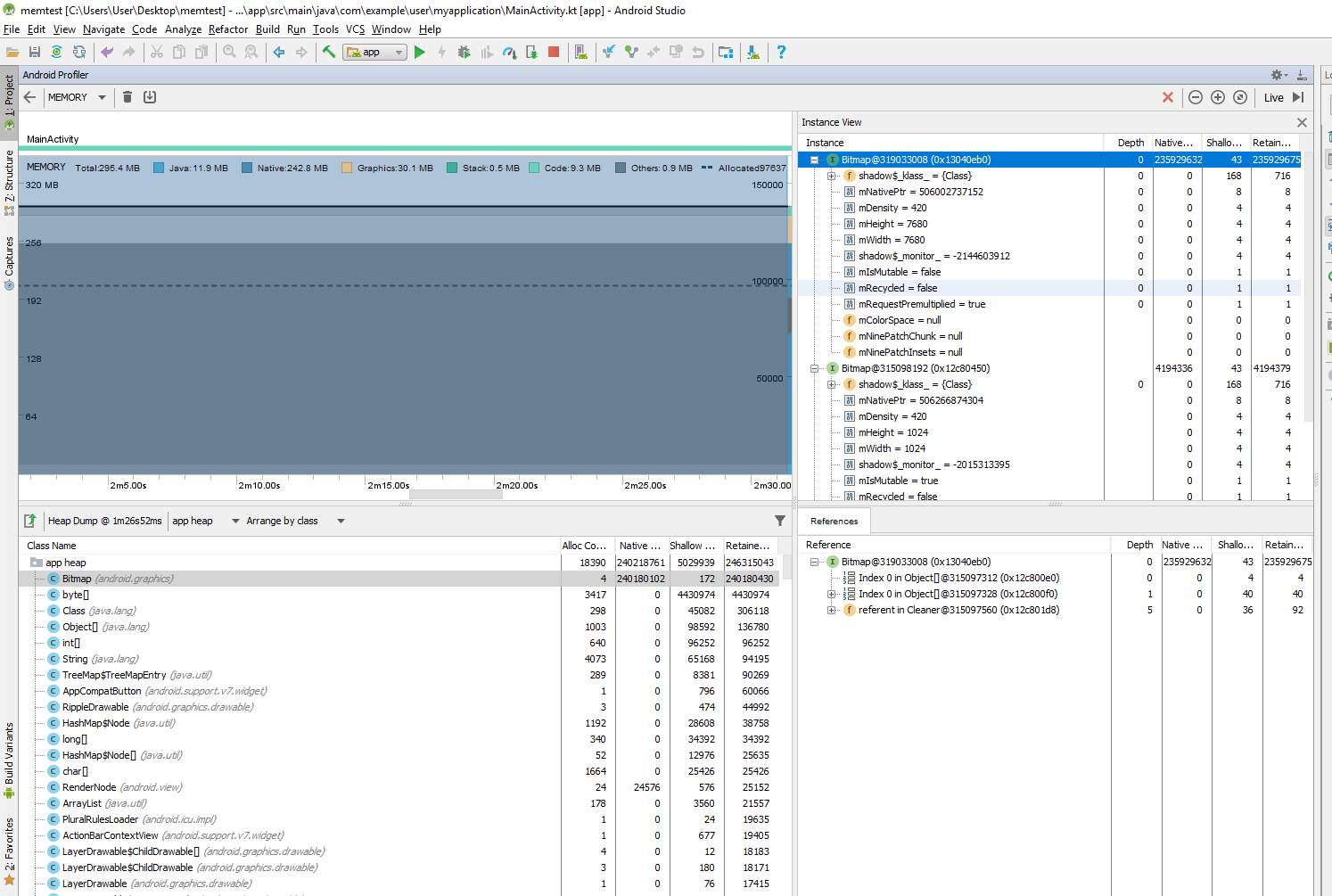 This new behavior raises a lot of questions. It could reduce number of crashes of OOM, but it can also make it very hard to detect them, find memory leaks and fix them. Maybe some of what I've seen are just bugs, but still...

Looks like your app was killed by Linux OOM killer. Game developers and other people, who actively use native memory, see that happen all the time.

Enabling kernel overcommit together with lifting heap-based restrictions on Bitmap allocation may result in the picture you see. You can read a bit about overcommit here.

Personally I would love to see an OS API for learning about app deaths, but I won't be holding my breath.

Pick some arbitrary value (say, quarter of heap size) and stick with it. If you get call to onTrimMemory (which is directly tied to OOM killer and native memory pressure), try to reduce your consumption.

Does not matter — Android heap size is always smaller than total physical memory. Any caching library, that used heap size as guideline, should continue to work either way.

I assume, that current version of Android Oreo allows memory overcommit: untouched memory isn't actually requested from hardware, so you can have as much of it as allowed by OS addressable memory limit (a bit less than 2 gigabytes on x86, several terabytes on x64). All virtual memory consists of pages (usually 4Kb each). When you try to use a page, it is paged in. If the kernel does not have enough physical memory to map a page for your process, the app will receive a signal, killing it. In practice the app will killed by Linux OOM killer way before that happens.

The profiler graph shows heap memory usage. If the bitmaps do not count towards heap, that graph naturally won't show them.

Native memory functions appear to work as (originally) intended — they correctly track virtual allocations, but do not realize, how much physical memory is reserved for each virtual allocation by kernel (that is opaque to user space).

Also, as opposed to when I decode bitmaps, I do get a crash here (including a dialog), but it's not OOM. Instead, it's... NPE !

You haven't used any of those pages, so they are not mapped to physical memory, hence the OOM killer does not kill you (yet). The allocation might have failed because you have ran out of virtual memory, which is more harmless, compared to running out of physical memory, or because of hitting some other kind of memory limit (such as cgroups-based ones), which is even more harmless.

OOM killer destroys your app with SIGKILL (same as when your process is terminated after going into background). Your process can not react to it. It is theoretically possible to observe process death from child process, but the exact reason may be hard to learn. See Who “Killed” my process and why?. A well-written library may be able to periodically check memory usage and make an educated guess. An extremely well-written library may be able to detect memory allocations by hooking into native malloc function (for example, by hot-patching application import table or something like that).

To better demonstrate how virtual memory management works, let's imagine allocating 1000 of Bitmaps 1Gb each, then changing a single pixel in each of them. The OS does not initially allocate physical memory for those Bitmaps, so they take around 0 byte of physical memory in total. After you touch a single four-byte RGBA pixel of Bitmap, the kernel will allocate a single page for storing that pixel.

The OS does not know anything about Java objects and Bitmaps — it simply views all process memory as continuous list of pages.

The commonly used size of memory page is 4Kb. After touching 1000 pixels — one in each 1Gb Bitmap — you will still use up less than 4Mb of real memory.

If anybody is interested by the Java version of this brillant Kotlin code to get memory used by the app, here it is:

Not the answer you're looking for? Browse other questions tagged android memory bitmap android-8.0-oreo or ask your own question.

721
What killed my process and why?
120
How to get current memory usage in android?
18
Is it needed to call Bitmap.recycle() after used (in Android)?
39
How to cache bitmaps into native memory
10
Maximum native memory that can be allocated to an android app
11
Are there any major differences or restrictions when using assets or res/raw folders?
16
What's the use and advantages of using ImageDecoder of Android P?
2
Determining available memory for bitmaps
0
How can I dynamically monitor free native memory on Android?
0
Why Google change the Bitmap pixel data storage to native heap in Android 8.0?
See more linked questions

680
How to determine CPU and memory consumption from inside a process
3
android createBitmap OOM when ((freeMemory > bitmapSize) && (nativeFreeHeap < bitmap size))
10
The Memory Usage and Fragmentation of .NET Image classes: Bitmap vs. Metafile
11
Android Bitmap Memory Issue - Error: Out of memory on a 8294416-byte allocation
2
How does Bitmap compress work in android?
22
Release Memory of Particular Activity when it is Destroyed