I follow all the steps mention in MongoDB installation documents for Ubuntu 16.04.

when I started MongoDB got an error as:

Most probably unit mongodb.service is masked. Use following command to unmask it.

2 - Reinstall as described on official site, I will just write down the all steps. enter link description here

3 - Now it should work, please try below command

and check the status

it should appear the mongo shell

You are missing a 'b' I think?

I think this is the case?

If you are following the official doc and are coming across with the error above that means mongod.service is not enabled yet on you machine (I am talking about Ubuntu 16.04). You need to do that using following command

Now you can start mongodb using the following command

Worked fine after the install; this problem occurred after I rebooted.

What worked for me is

After running the above commands open a new terminal and run:

and run the mongo shell to check:

If this problem occurs again (as with me every time I reboot), make it as a shell script to be run at startup.

Make a file in the /etc/init.d directory

After the next boot you can normally start the mongod server by:

Explanation: mongodb requires the above two folders with owner as mongodb. When we shutdown/reboot, one or both of them gets removed. So, we need to create them and change their ownership.

Edit: I was using Stacer's cleaning tool before every shutdown. This also removes log files and folders. And hence, the error at every startup. Now I unselect the mongodb option and then clean.

the status is active when I started using above command

For Ubuntu 16.04.5, it is noticed that MongoDB installations does not auto enable the mongod.service file after installation in my case after I have installed on several servers, so we need to enable it like below:

Issue below to check whether mongod is enabled

If it shows as "disabled", then you need to enable it.

If we want to see whether mongod.service file exists in case this file is missing, check in

You will see a file

This happened to me while adding users in admin db.

is recommended from the official mongo website, but did not help.

run journalctl -xe and if the issue is

Then run sudo mongod --> mongo This will fix the issue and if you want to run with systemctl, then terminate the windows for mongod and mongo and run

Just try with this command:

Run this command to reload the daemon:

After this you need to restart the mongod service:

To verify that MongoDB has started, run:

To ensure that MongoDB will start following a system reboot, run:

May be you are using a wrong version of mongodb list file. I faced this problem but it's my mistake when not selecting the right list file for Ubuntu 16.04. The default selected is for Ubuntu 14.04 and it's the reason for my error: "Failed to start mongod.service: Unit mongod.service not found." 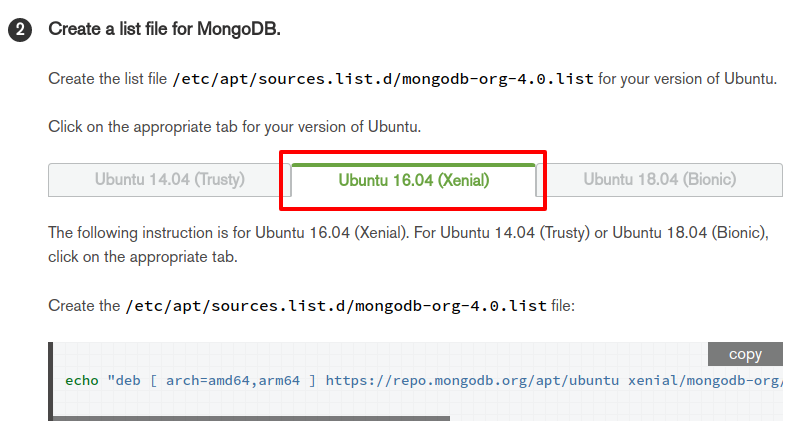 The following steps helped me solve the problem of not being able to start mongodb on Ubuntu Server 18.04 LTS

In some cases for some security reasons the unit would be marked as masked. This state is much stronger than being disabled in which you cannot even start the service manually.

to check this, run the following command:

then you can unmask the unit by:

then you may want to start the service:

and to enable auto-start during system boot:

However if mongodb did not start again or was not masked at all, you have the option to reinstall it this way:

None of the 30+ existing answers helped me, because my service file was actually missing, not masked or disabled. Re-installing wasn't creating it either for some reason. Solution:

You should check that /etc/mongod.conf is actually the location of your conf file, it may be /etc/mongodb.conf instead.

As for how your service file may have gone missing in the first place. I managed to break it by uninstalling 3.0.15, trying and failing to install 5.* due to ubuntu 16 not being able to run it since some dependencies clashed, then re-installing 3.0.15 again.

I got the same error for a long while, tried almost all installation isntruciton on google but could not find te answer...

I followed the instructions from https://docs.mongodb.com/manual/tutorial/install-mongodb-on-ubuntu/ but keep getting the error Failed to start mongod.service: Unit mongod.service not found

The db version was 2.6.12 instead of the latest one 4.0.3. So make sure you dont have mongodb-org-server already installed, if yes, then make sure you uupdate it to your target version (as indicated @https://docs.mongodb.com/manual/tutorial/install-mongodb-on-ubuntu/ -> Step 4 - Install a specific release of MongoDB.)

and after doing this its all working for me :D

Well.... My answer may be considered naive but in fact it has been the only way MongoDB has work in my case, Ubuntu 19.10. I tried to run the commands from the most voted comments and none worked, when running:

I got this alert:

With some research I found out that running the DB in another port could be a solution, then:

And it works great for me every time. Long answer but wanted to give context before giving such a simple solution.

(If I'm doing it wrong or doesn't seem logical, plz tell me! Relevant for me)

Do not remove your db if you already have some data you found useful. Just run the command below and you're good.

To solve the problem of not being able to start mongodb on ubuntu 16.04 1) look at mongodb log file

3) Look at the permission of file /tmp/mongdb-27017.lock and find that the owner is root instead of mongodb

I just encountered this on my parrot os and this is how I solved it.

Just follow the below commands. This has worked for me.

For those that run into this and end up on this answer, as I did, where they got this error during uninstall orupgrade and Ubuntu keeps failing to uninstall the previous because the service doesn't exist this one line will get you past that and allow the uninstall or upgrade to continue.

It worked for me on ubuntu 20.04: In my case, mongod.service file was locked so it was giving me the same error. To resolve the issue:- Step 1: Use following command to check if the mongod.service is present there

Step 2: If the file is present there then Run the following command to unlock the file mongod.service

For Ubuntu, if you have old mongodb installed (e.g 3.x).

This is because Ubuntu or any other OS, won't work proparly for the system files if you have closed rootlogin. That is right. Even when you enter the root on filesystem. I know it seems not logical but it is all about 1 and 0's here.

You need to activate root login. You can download cyberduck or any file explorer to quickly find the file .

if you couldn't go with a software tool, you can use for the step above: vi /etc/ssh/sshd_config then press ctrl-c write to console for saving it :wq

if that didn't help either because your VPS initiates services just before on the root, you should reinstall the VPS maybe

Note that if using the Windows Subsystem for Linux, systemd isn't supported and therefore commands like systemctl won't work:

Failed to connect to bus: No such file or directory

The mongo server can still be started manual via mondgod for development of course.

The second step of mongo installation is

Instead of this command do it manually

And save the file,

Continue all process as in installation docs

It works for me:

The above command worked for me!

Try starting the service it after unmasking it

Check the status using the above command or simply start the mongodb server using mongo command, I hope it works. Cheers

54
Pymongo keeps refusing the connection at 27017
6
Mongodb /var/log/mongodb/mongod.log prevents mongod from starting
1
Mongod.service not found => Pop from an empty deque => Authentication failed
1
I screwed up my installation of MongoDB and I need help removing it to reinstall it
1
Can't Install MongoDB
0
Not able to start mongoDB services
0
Failed to start mongod.service: Unit mongod.service not found. although i done all steps and deamon reloaded
0
Mongo fails to start after Xenial upgrade
0
mongo refusing connection on Ubuntu 16.04