After this I run:

Now I get this error:

Edited to explain the options (from comments):

--save-dev is used so that your app is able to find the module in local node_modules. --save-dev adds package to devDependencies in package.json. --unsafe--perm is used to run install scripts as root. To avoid sudo, use nvm instead. --unsafe--perm is really not needed as sudo is already mentioned. So the command basically air tights the script to install node-sass at any cost. 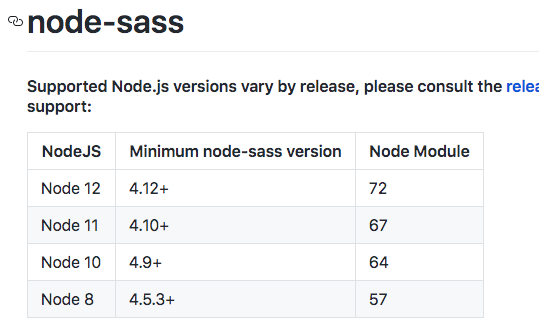 Example: Check the version of node you are running.

Lastly, using sudo with npm is not a good practice. Please refer to this article. https://medium.com/@ExplosionPills/dont-use-sudo-with-npm-still-66e609f5f92

Doing npm uninstall node-sass and then npm i node-sass did not work for me.

Solution worked for me is npm install --save-dev node-sass.

You have not installed it

You are having a permissions error

You had a memory issue because it tried to make it (build from c code in your platform),this applies to some platforms and node versions

Your node and npm versions are not compatible,which most probably generated a failure in the build process,

In this case use n or nvm to make sure you have the same version in the new and original environment, the one where it did work, as this is usually by using different versions in different environments

This is what worked for me. I first uninstall node-sass. Then install it back.

I have fix this problem without installing node-sass by this command:

One of the cases is the post-install process fails. Right after node-sass is installed, the post-install script will be executed. It requires Python and a C++ builder for that process. The log 'gyp: No Xcode or CLT version detected!' maybe because it couldn't find any C++ builder. So try installing Python and any C++ builder then put their directories in environment variables so that npm can find them. (I come from Windows)

In my case I had to also had to perform:

To fix the problem

There is an issue with downloading npm dependencies due to network which you have. try to download the npm dependencies in open network . you won't get any issue. i am also faced this similar issue and resolved finally.

use below commands: npm install (it will download all depedencies) npm start to start the angular application

npm install node-sass will do the job in most of the cases, as it will add missing sass npm dependency module doesn't exist or it will overwrite previous crashed version.

For Mac Users use sudo in front of above commands.

On Windows machines npm rebuild node-sass --force may not work for some users because it's essentially saying, "please force npm to rebuild the sass node module for me". It will not work because that module doesn't exist.

Whenever you did npm install to the initial installation, the sass module did not get installed, which is why this problem occurs.

Then when I checked my development machine, where the error occurred, it had Node version V.10.8.0.

Upgrading Node to v10.11.0 in my development machine fixed the issue.

My problem was that a webfilter didn't allow me to download the node-sass package, when I executed the command

After the installation of the Windows Build Tools

it build node-sass on it's own and now I can use it.

you must install node-sass in dev section of package.json

and it still doesn't work remember to change permission to folder

I have also been facing this error. None of the above methods work for me. Please follow this as it worked for me.

For Installing node-sass in Ubuntu 16 via npm :-

You can install with npm 5.2.0 Version

If you are using npm separately then upgrade or downgrade npm version to 5.2.0

I ran into this error while I was using Microsoft Visual Studio Code's integrated git terminal. For some weird reason VS code was not allowing me to install 'node-sass'. Then I used 'Git Bash' (which was installed with git) and ran the following command: npm install node-sass It worked for me. I don't know why & how it worked. If anyone has any explanation please let me know.

You should try to check the log generated by npm install.

I have faced the same issues, and I found the error that python2 is not found in the path (environment variable).

After installing Python, everything worked fine.

I had a similar issue when I tried to run a project. First i uninstalled the current version

Then i reinstalled to the latest version with

Upgrading to latest version of nodeJS solved my problem

This will do magic, you can use it with sudo

I had the same error when installing dependencies in Angular. I've tried aforementioned techniques but none of them worked until I've deleted package-lock.json which was previously created when running Node v11.

Now I'm using Node v12 so this is how I got resolved.

I repeat if you have package-lock.json delete it, file and then install dependencies.

Exactly same issue i was also facing and i tried all above answers but could not resolve, Below is the command which fixed my problem.

I met same issue installing node-sass when I am on Node 12.9.0

Not the answer you're looking for? Browse other questions tagged angularjs node.js npm macos-high-sierra or ask your own question.