How to get formContext in Ribbon command of Dynamics 365 9.0

In Dynamics 365 9.0 there was quite a big change regarding how to access form attributes and controls - instead of Xrm.Page namespace, we should pass executionContext to a function and get formContext using getFormContext() function. This is working fine and I had never a problem with using this approach.

However I did not figured out yet how to properly access formContext in functions that are called from Ribbon. The documentation says that this should be really straightforward:

But it does not say how to pass executionContext to Ribbon function. In normal functions there is a checkbox "Pass execution context as first parameter" but what about Ribbon functions? There are parameters that we can pass into these functions, but they are simply GUID of selected records, or type of selected record or even a list of objects but I could not find in documentation, if there is a parameter equal to executionContext. Has anybody already solved this problem?

Also I know that I can use Xrm.Page and it will work (for now at least...) but I would like to know, how it can be done using the latest guidelines in version 9.0

As per Scott's suggestion and this article i passed PrimaryControl to my Ribbon command but unfortunately, the argument is of type Mscrm.FormControlLite and it does not have getAttribute function or any function that would allow to access the formContext (at least I don't see anything useful). Some screenshot from Developer tools: 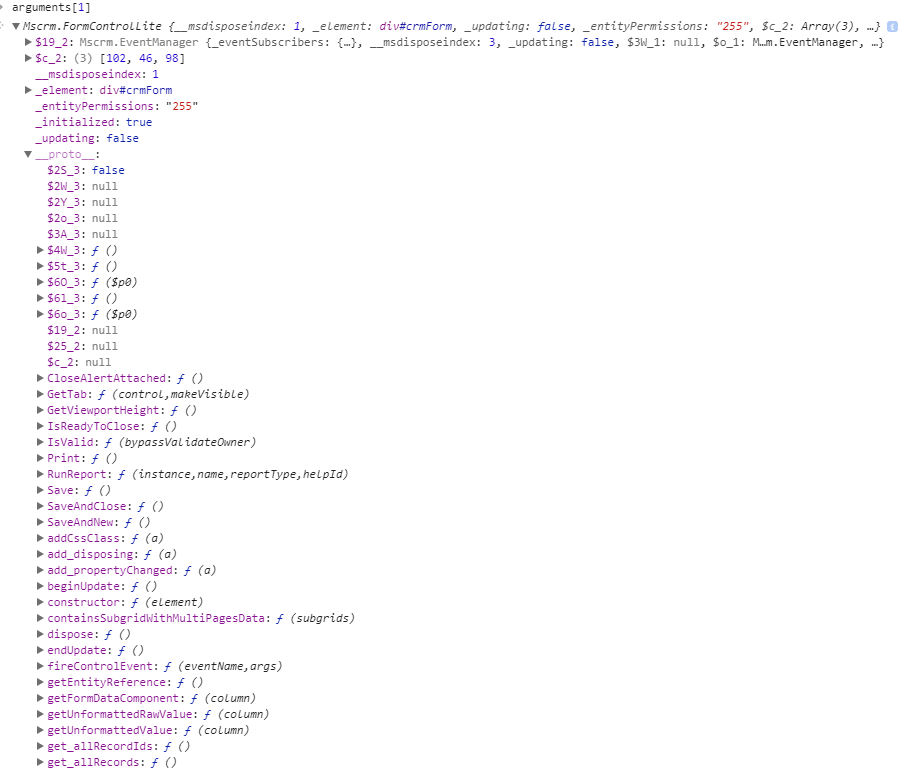 So it looks like a form representation of some kind, but is probably not related to formContext (I assume that if a Ribbon would be called from a list of records, this item can be of type of grid or something like that)

As per https://docs.microsoft.com/en-us/dynamics365/get-started/whats-new/customer-engagement/important-changes-coming#some-client-apis-are-deprecated you pass it as the PrimaryControl parameter.

According to the documentation (1/2/2019): https://docs.microsoft.com/en-us/dynamics365/customer-engagement/developer/customize-dev/pass-dynamics-365-data-page-parameter-ribbon-actions#form-and-grid-context-in-ribbon-actions, one should perform operations on the primaryControl as though it is the formContext.

But, the key piece of the example provided is this: // Perform operations using the formContext object being the key (no idea why they added the var formContext = primaryControl line, imo, it would have been clearer if they had instead just shown an example: primaryControl.getAttribute('xxxx');

I suspect primaryControl.getFormContext() code started getting used because thats how you get the formContext when working with forms (https://docs.microsoft.com/en-us/dynamics365/customer-engagement/developer/clientapi/clientapi-form-context#using-the-formcontext-object-instead-of-the-xrmpage-object).

The problem with using primaryControl.getFormContext() is that it works with the normal Web interface, but breaks with the UCI. But if you use primaryControl as though it is the form-context, then it works for both the legacy web-client and uci interfaces.

Here is a function that I use:

I was having the same issue as well. What I found out was, there was an error in Microsoft doco. Please follow whatever Scott mentioned passing CRM Parameter from ribbon command action. In javascript function, please try below to get form context

this fixed my issue.

There is a little trick you can do to not have to pass the Primary Control as Crm Parameter with the RibbonWorkbench utility, or if having done this, it would not be working for you, as it could happend if you were trying this in a home-grid ribbon.

I hope this works for you or anyone else.

1
Connect to Dynamics 365 Customer Engagement web services using OAuth
1
MS Dynamics : Generate Refresh Token for OAuth
0
Is Azure AD Conditional Access supported for Dynamics 365 web services?
0
AuthenticationResult AcquireToken method won't let me use the non async method
3
How do I use $expand on ownerid to fetch SystemUser properties with the Dynamics 365 Web API?
3
What is the definition for the licensetype enum?
0
Sandbox environment for Dynamics 365 learning
3
Dynamics 365 Search Resource Availability
1
How to get the details about the contact/account fields along with their types using Web API in Dynamics 365?
0
Dynamics CRM Getting Account Details