I'm having a problem similar to the one discussed in this thread, but the solution provided to him isn't working for me. I apologize for the lengthy description, but this is my first post on SO and I want to be complete.

I have a program that runs fine in the simulator. However, when I try to push it out to the device, I get an error that says this:

The Google machine tells me that the Main nib file base name can be modified in my app's plist. So, I go there and I change it to FrontPage. Now, I get a different error:

I'm pulling my hair out over here - anyone know a solution?

iphone ios provisioning
Share
Improve this question
edited May 23 '17 at 12:13

Make sure that your view is connected to your "View" outlet in Interface Builder. You do this by right clicking on your "File's Owner" in IB and then dragging to the "View" outlet to your View. Here's an illustration from a game I'm working on. Notice the blue line, dragged from the dot on the right to the "view". 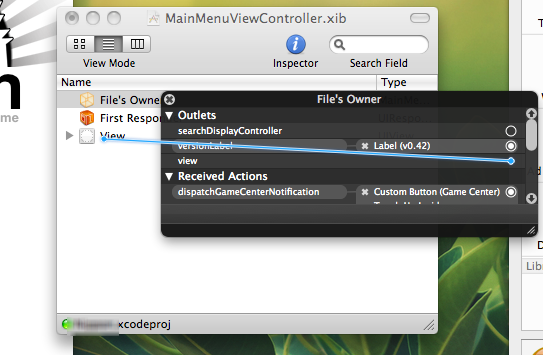 Another thing you will want to check is your Info.plist. Make sure that you have called your nib file FrontPage and not *FrontPage****.nib***.

If Frontpage.xib is going to be your application's main xib, then you have to create a Window object and an App Delegate object in that xib in order for the app to be able to load. Before you can start presenting view controllers and such you have to configure the app and the window or it will crash as you describe. I would suggest creating a new project using a Window based template and just take a look at the MainWindow.xib that gets created automatically and try to mimic it in your Frontpage.xib..

.. Although I would just sincerely suggest using a MainWindow.sib in your project and making your Frontpage.xib a normal view controller xib. If you choose to add a new file to your project, then choose User Interface, then choose Application xib instead of View xib, then it will set you up with something close to what you need.

The project templates are important and useful. You should always use them. I start all of mine with a Window Based template. It is the most basic template and the most flexible.

If the view controller for FrontPage.xib is set properly by setting the File owner property via IB then you also need to set the view property. you can do this by control dragging from Fileowner to the view. From the error it appears that you have yet not set the view property for your view. Open the nib in Interface builder and and look for the View Connection in connection Inspector , this must be connected to file owner's view outlet. You don't need to declare it as a property anywhere.

Not the answer you're looking for? Browse other questions tagged iphone ios provisioning or ask your own question.

25
Could not load nib in bundle on iPhone device

1228
How can I develop for iPhone using a Windows development machine?
241
How to load a UIView using a nib file created with Interface Builder
1254
Xcode - How to fix 'NSUnknownKeyException', reason: … this class is not key value coding-compliant for the key X" error?
782
Loaded nib but the 'view' outlet was not set
122
Could not load NIB in bundle
4
Could not load NIB in bundle
324
Assertion failure in dequeueReusableCellWithIdentifier:forIndexPath:
2
Loading nib from my own bundle?
0
NSBundle is Not Loading - ObjectiveC
354
After upgrading to Xcode 11.2 from Xcode 11.1, app crashes due to _UITextLayoutView