Having problem with staticfiles in Django 2. 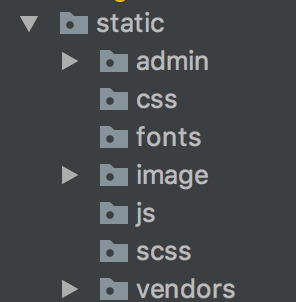 I am getting 404 for statics. Tried different things but no success. btw collectstatic has been already performed. Another thing is when i make changes in the static folder, collectstatic is not collecting anything. it says "unmodified".

i am newbie in Django. appreciate for your help.

New structure is below

1. is the syntax error that Digitiain pointed out in his answer:

The first point should be fairly clear. The second also confused me in the beginning. But it makes a lot of sense actually:

In STATICFILES_DIRS you tell django where to go and look for static files. This not primarily to serve them, but to collect them! The point is that on a productive server, django is not supposed to serve static files; this task should be handled by the web server. Check the docs for details. The idea is that you run the command python manage.py collectstatic and django will go through all the paths in STATICFILES_DIRS, collect the static files and put them... - exactly! - in the STATIC_ROOT folder. Now it becomes clear why the STATIC_ROOT folder cannot really be part of STATICFILES_DIRS as this would mean django would need to put the folder into itself. Again, this is in the case of a productive server. During development django can handle static files without help of a web server, here is more from the docs on that.

I hope that helps to clarify the relation between STATICFILES_DIRS and STATIC_ROOT. Bottom-line: Choose a different path for STATIC_ROOT and you should be good to go!

As an example, you could have a project structure like this:

Then it would be valid to define:

This might be a red herring, but in the Django docs the syntax for setting a path relative to your BASE_DIR includes os.path.join, so yours would look like:

EDIT: I also just noticed that you referenced DIR rather than DIRS, which could be causing grief. Ditto with templates.

Not the answer you're looking for? Browse other questions tagged python django django-staticfiles django-settings or ask your own question.

0
Django external css file problem
3
Can't get Django/Postgres app settings working on Heroku
2
How to link my css, js and image file link in django
0
Best configuration for Django staticfiles
0
I am unable to deploy my django 2.2 project due to a static files error