React Native: JAVA_HOME is not set and no 'java' command could be found in your PATH

I've followed step by step the official Getting Started. I started from a clean linux install and installed everything required as per the "Building Projects with Native Code" tab. I have also read the troubleshooting section. I've already created the project using the terminal.

This is the error when I run react-native run-android:

It does not find JAVA_HOME because the latest versions of Android Studio don't require Java to be installed in the system. Instead an internal JRE is used.

Duplicate disclaimer: I've already read this question. This is not what I want. I know how to set the Java home. I just want to run the react project WITHOUT having to install a separate Java.

copy string shown, such as:

In file locator directory window, right-click on "This PC" ->

click on the New... button under System Variables, then type and paste respectively:

and hit OK buttons to close out.

Some installations may require JRE_HOME to be set as well, the same way.

To check, open a NEW black console window, then type echo %JAVA_HOME% . You should get back the full path you typed into the system variable. Windows 10 seems to support spaces in the filename paths for system variables very well, and does not seem to need ~tilde eliding.

I'll answer my own questions and sponfeed my fellow linux users:

1- To point JAVA_HOME to the JRE included with Android Studio first locate the Android Studio installation folder, then find the /jre directory. That directory's full path is what you need to set JAVA_PATH to (thanks to @TentenPonce for his answer). On linux, you can set JAVA_HOME by adding this line to your .bashrc or .bash_profile files:

This file (one or the other) is the same as the one you added ANDROID_HOME to if you were following the React Native Getting Started for Linux. Both are hidden by default and can be found in your home directory. After adding the line you need to reload the terminal so that it can pick up the new environment variable. So type:

and now you can run react-native run-android in that same terminal. Another option is to restart the OS. Other terminals might work differently.

NOTE: for the project to actually run, you need to start an Android emulator in advance, or have a real device connected. The easiest way is to open an already existing Android Studio project and launch the emulator from there, then close Android Studio.

2- Since what react-native run-android appears to do is just this:

You can actually open the nested android project with Android Studio and run it manually. JS changes can be reloaded if you enable live reload in the emulator. Type CTRL + M (CMD + M on MacOS) and select the "Enable live reload" option in the menu that appears (Kudos to @BKO for his answer)

It is located on the Android Studio folder itself, on where you installed it.

I fixed this issue by installing jre, I have jdk already installed but jre was not installed.

I'm using Ubuntu 20 on my machine, I have got the same problem the thing that worked for me was:

you can verify that if the installation was successful or not by:

you are gonna see something like this in your terminal

For those still not able to set JAVA_HOME from Android Studio installation, for me the path was actually not in C:\...\Android Studio\jre

but rather in the ...\Android Studio\jre\jre.

Don't ask me why though.

add the following line in your .bashrc or .bash_profile

All I did is go to my project directory from the cmd (command prompt) I typed java -version.it told me what version it was looking for. so I Installed that version and I changed the path to were the jdk of that version was located . 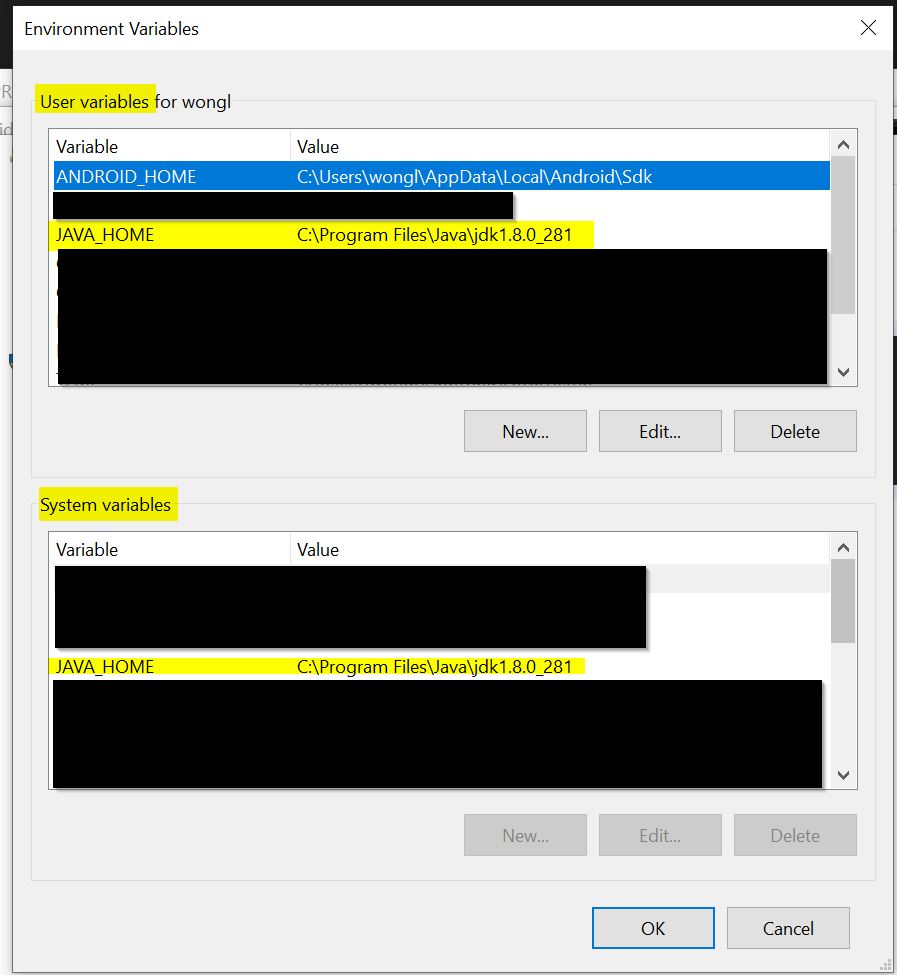 tip from this site https://confluence.atlassian.com/doc/setting-the-java_home-variable-in-windows-8895.html

THE RESULT: what java home is set to

i did this in my terminal:

then i went to /Java/JavaVirturalMachines turns out I had the wrong "jdk1.8.0_202.jdk" folder, there was another number... 4. you can use this command to set java_home

where what its = to is the path to that jre folder, so anyone's can be different.

what I did to solve this on windows was to go to the environment variables and set the variable name to JAVA_HOME and then set the variable value to C:\Program Files\OpenJDK\openjdk-8u312-b07

then I set the path to C:\Program Files\OpenJDK\openjdk-8u312-b07\bin 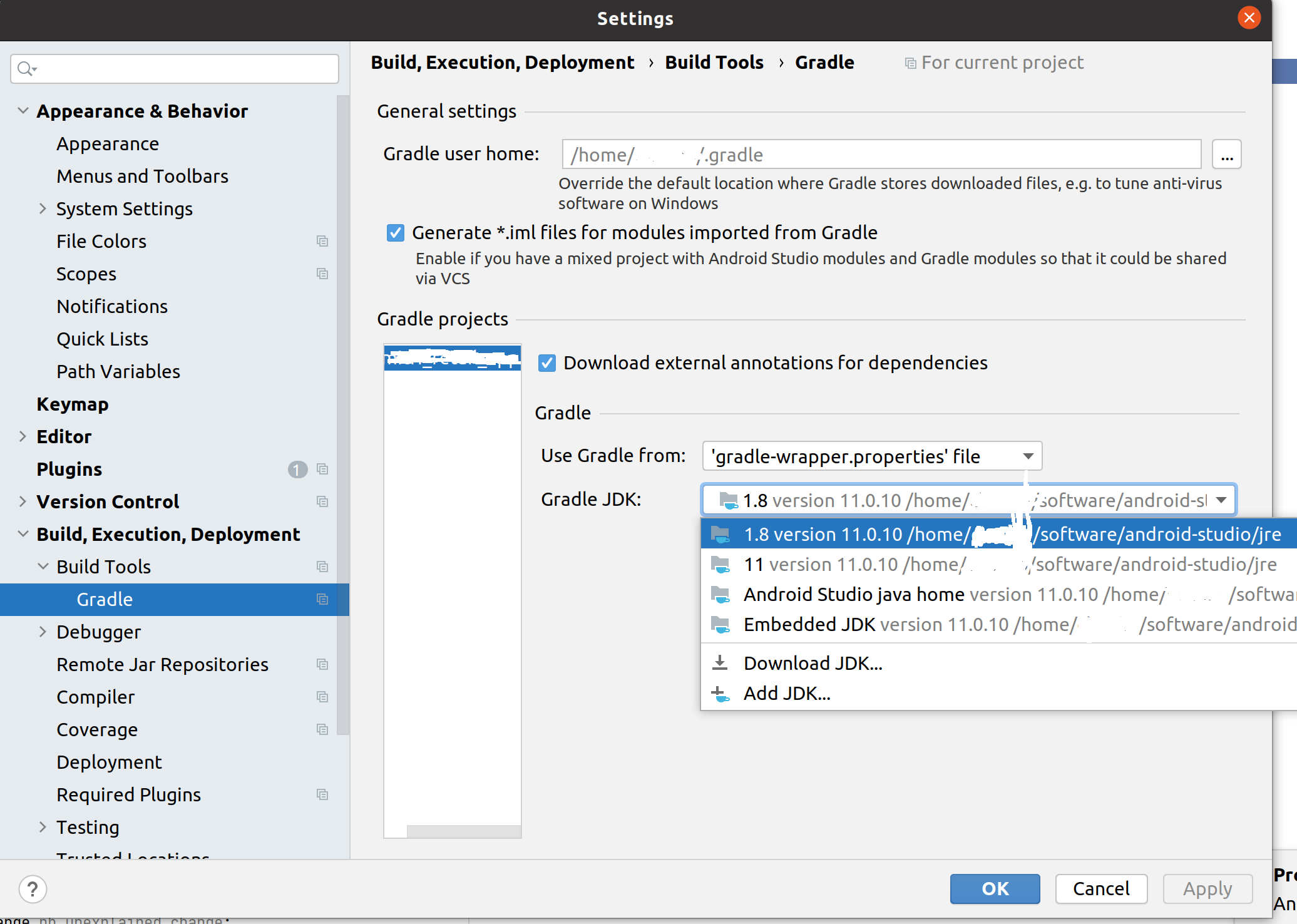 Guys after fight a lot to find the solution, including pass for many of that articles. I just realized that when you extract the Android SDK it doesn't come inside the folder cmdline-tools/latest and doesn't matter the place that I put the folder, opt/Androd_SDK, $HOME/Android_SDK the sequence of the error were the same. Until I got this error running:

➜ bin ./sdkmanager -version Error: Could not determine SDK root. Error: Either specify it explicitly with --sdk_root= or move this package into its expected location: /cmdline-tools/latest/

So, basic the solution was add the content of the SDK zip inside of the folders cmdline-tools/latest.

Once you do this, SDK and all the commands will work normally. Just don't forget to finish the configuration, like create the environment of the Android SDK, JAVA and so on.

An awesome article is that one: https://medium.com/@khairold/setting-up-react-native-on-linux-without-android-studio-a65f3e011bbb

After adding the environmental variable , please restart the editor. It may save your ton of time.

Not the answer you're looking for? Browse other questions tagged android reactjs react-native or ask your own question.

122
How to enable live reload in react native on android?
3
ERROR: JAVA_HOME is not set and no 'java' command could be found in your PATH
0
What is the best Java version to download from this page in june of this year of our lord 2018 (for react-native)?

685
Android error: Failed to install *.apk on device *: timeout
802
Error retrieving parent for item: No resource found that matches the given name after upgrading to AppCompat v23
550
React Native android build failed. SDK location not found
925
What is the difference between React Native and React?
203
React-Native: Application has not been registered error
92
React Native Error - yarn' is not recognized as an internal or external command
2
JAVA_HOME is not set and no 'java' command could be found in your PATH
613
Android Studio Error "Android Gradle plugin requires Java 11 to run. You are currently using Java 1.8"