Have I reached the limits of the size of objects JavaScript in my browser can handle?

I'm embedding a large array in <script> tags in my HTML, like this (nothing surprising):

If you want to see for yourself, you can download it from GitHub. (All the data in there is canned, so much of it is repeated. This will not be the case in production.)

Now, I'm really not concerned about serving that much data. My server gzips its responses, so it really doesn't take all that long to get the data over the wire. However, there is a really nasty tendency for the page, once loaded, to crash the browser. I'm not testing at all in IE (this is an internal tool). My primary targets are Chrome 8 and Firefox 3.6.

In Firefox, I can see a reasonably useful error in the console:

In Chrome, I simply get the sad-tab page: 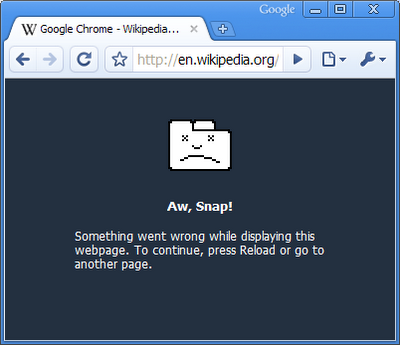 Cut to the chase, already

Incidentally, I was able to get this to work (read: not crash the tab) on-and-off in Chrome. I really thought that Chrome, at least, was made of tougher stuff, but apparently I was wrong...

@Crayon: I wasn't looking to justify why I'd like to dump this much data into the browser at once. Short version: either I solve this one (admittedly not-that-easy) problem, or I have to solve a whole slew of other problems. I'm opting for the simpler approach for now.

@various: right now, I'm not especially looking for ways to actually reduce the number of elements in the array. I know I could implement Ajax paging or what-have-you, but that introduces its own set of problems for me in other regards.

@Will: but I have a computer with a 4-core processor, 6 gigabytes of RAM, over half a terabyte of disk space ...and I'm not even asking for the browser to do this quickly - I'm just asking for it to work at all! ☹

With the spot-on suggestions from Juan as well as Guffa, I was able to get this to work! It would appear that the problem was just in parsing the source code, not actually working with it in memory.

To summarize the comment quagmire on Juan's answer: I had to split up my big array into a series of smaller ones, and then Array#concat() them, but that wasn't enough. I also had to put them into separate var statements. Like this:

To everyone who contributed to solving this: thank you. The first round is on me!

*other than the obvious: sending less data to the browser

javascript arrays memory
share|improve this question
edited May 23 '17 at 12:02

Here's what I would try: you said it's a 44MB file. That surely takes more than 44MB of memory, I'm guessing this takes much over 44MB of RAM, maybe half a gig. Could you just cut down the data until the browser doesn't crash and see how much memory the browser uses?

Even apps that run only on the server would be well served to not read a 44MB file and keep it in memory. Having said all that, I believe the browser should be able to handle it, so let me run some tests.

First Test I cut the array in half and there were no problems, uses 80MB, no crash

Second Test I split the array into two separate arrays, but still contains all the data, uses 160Mb, no crash

Third Test Since Firefox said it ran out of stack, the problem is probably that it can't parse the array at once. I created two separate arrays, arr1, arr2 then did arr3 = arr1.concat(arr2); It ran fine and uses only slightly more memory, around 165MB.

Fourth Test I am creating 7 of those arrays (22MB each) and concatting them to test browser limits. It takes about 10 seconds for the page to finish loading. Memory goes up to 1.3GB, then it goes back down to 500MB. So yeah chrome can handle it. It just can't parse it all at once because it uses some kind of recursion as can be noticed by the console's error message.

Answer Create separate arrays (less than 20MB each) and then concat them. Each array should be on its own var statement, instead of doing multiple declarations with a single var.

I would still consider fetching only the necessary part, it may make the browser sluggish. however, if it's an internal task, this should be fine.

Yes, it's too much to ask of a browser.

That amount of data would be managable if it already was data, but it isn't data yet. Consider that the browser has to parse that huge block of source code while checking that the syntax adds up for it all. Once parsed into valid code, the code has to run to produce the actual array.

So, all of the data will exist in (at least) two or three versions at once, each with a certain amount of overhead. As the array literal is a single statement, each step will have to include all of the data.

Dividing the data into several smaller arrays would possibly make it easier on the browser.

Try retrieving the data with Ajax as an JSON page. I don't know the exact size but I've been able to pull large amounts of data into Google Chrome that way.

Do you really need all the data? can't you stream just the data currently needed using AJAX? Similar to Google Maps - you can't fit all the map data into browser's memory, they display just the part you are currently seeing.

Remember that 40 megs of hard data can be inflated to much more in browser's internal representation. For example the JS interpreter may use hashtable to implement the array, which would add additional memory overhead. Also, I expect that the browsers stores both source code and the JS memory, that alone doubles the amount of data.

JS is designed to provide client-side UI interaction, not handle loads of data.

Btw, do you really think users will like downloading 40 megabytes worth of code? There are still many users with less than broadband internet access. And execution of the script will be suspended until all the data is downloaded.

I had a look at the data. That array will definitely be represented as hashtable. Also many of the items are objects, which will require reference tracking...that is additional memory.

I guess the performance would be better if it was simple vector of primitive data.

EDIT3: The data could certainly be simplified. The bulk of it are repeating strings, which could be encoded in some way as integers or something. Also, my Opera is having trouble just displaying the text, let alone interpreting it.

EDIT4: Forget the DateTime objects! Use unix era timestamps or strings, but not objects!

EDIT5: Your processor doesn't matter because JS is single-threaded. And your RAM doesn't matter either, most browsers are 32bit, so they can't use much of that memory.

EDIT6: Try changing the array indices to sequential integers (0, 1, 2, 3...). That might make the browser use more efficient array data structure. You can use constants to access the array items efficiently. This is going to cut down the array size by huge chunk.

Use lazy loading. Have pointers to the data and get it when the user asks.

This technique is used in various places to manage millions of records of data.

I found what I was looking for. Virtual scrolling in the jqgrid. That's 500k records being lazy loaded.

I would try having it as one big string with separator between each "item" then use split, something like:

So this leads me to believe the problem is not with the array itself but rather it's contents.. optimize the contents to simple items then parse them "on the fly" and it should work.

Not the answer you're looking for? Browse other questions tagged javascript arrays memory or ask your own question.

1023
Text editor to open big (giant, huge, large) text files
156
Is there a limit on how much JSON can hold?
2
how to store large amount of data in javascript
2
Is there any way for me to work with this 100,000 item new-line separated string of words?
2
What is the maximum file size javascript can process?
1
Display 1000's of records in jsp page
0
JSON.parse causes Chrome tab to crash (“Aw, Snap”) despite use of try/catch
2
Can I achieve this in HTML5 + other web technologies?
1
splitting big PHP array into smaller chunks for javascript
3
Should JavaScript minifiers automatically combine var declarations?
see more linked questions…