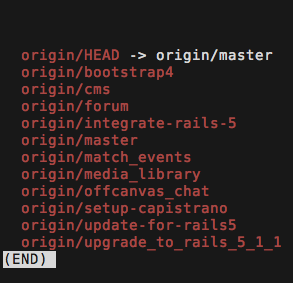 95
Git command output is in editor (vim) and not directly to terminal output
6
How to display output of `git branch` on-screen in same CLI terminal?
0
macOS git branch displays branches in less
0
Git list commands sometimes emulate a multi-page terminal, but I'd like output to always be dumped to stdout
0
How do I output git branch command result to standard out by default?
0
VSCode - git branch opens Vim
-1
Strange output of git branch
1486
How do I show my global Git configuration?
833
How do I prevent 'git diff' from using a pager?
310
How can I detect if my shell script is running through a pipe?
See more linked questions