To start, I am not a programmer. Im just someone trying to make a document that has an "invoice" number that increases on the document that goes up every time I print the document. I found a macro code online but I keep getting the

I'll attach a snap shot of what im getting with the piece that keeps screwing up high lighted. 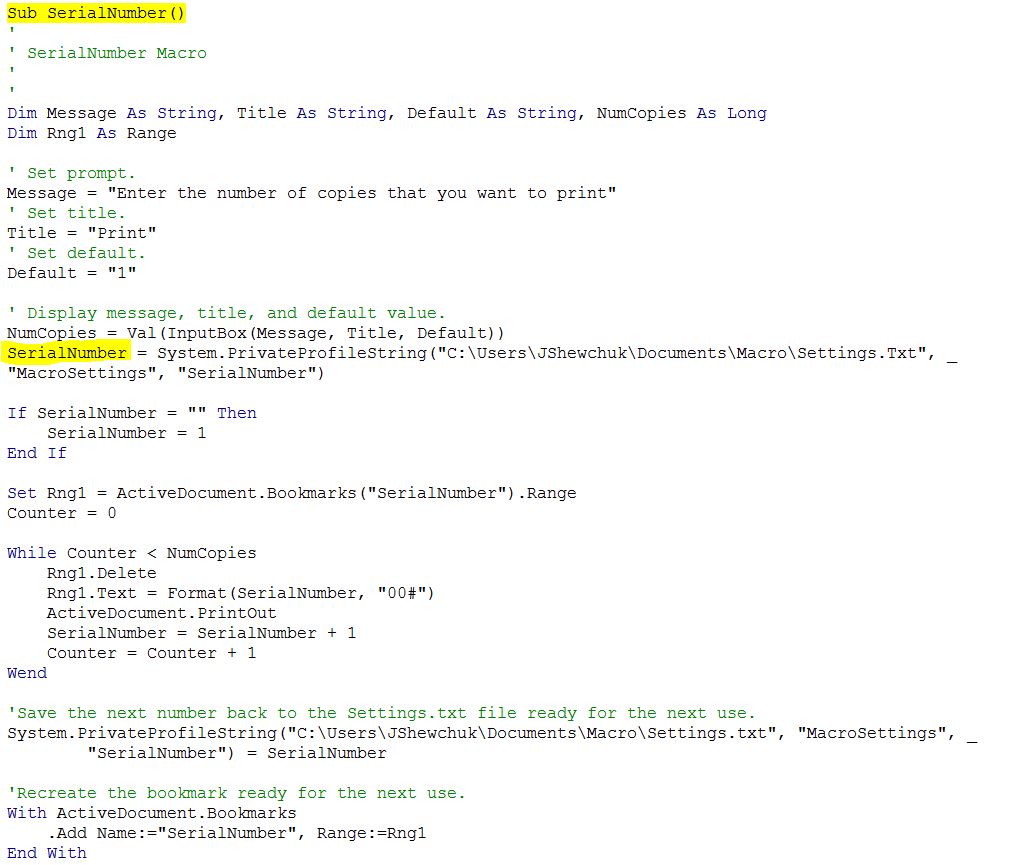 Is there something I'm doing wrong?

To expand on braX's answer...

That's the syntax for assigning the return value of a Function or Property Get member - namely, you are assigning to the procedure's identifier:

Declare a local variable inside the procedure's scope, before the illegal assignment:

And then your code will work... however I wouldn't recommend using the exact same name as the procedure.

My recommendation would be to name the local variable SerialNumber, and to rename the Sub procedure so that its name starts with a verb. Procedures do something, they're actions: find a meaningful name that describes what it does, and go with that.

Naming is hard though - if you can't find a simple name that describes what your procedure does, it's probably because it's doing too many things. Split it up into smaller, more focused procedures.

You are treating a Function like a Subroutine. Subroutines do not return values.

If you want the routine to return a value, then change Sub to Function (at the top)

If you are not wanting it to return anything, then choose a different variable name instead of SerialNumber, or change the name of the Subroutine.

You cannot use a variable name that is the same as the name of the Subroutine.

Not the answer you're looking for? Browse other questions tagged vba compiler-errors or ask your own question.

1085
R cannot be resolved - Android error
501
Is there a way to crack the password on an Excel VBA Project?
283
How to return a result from a VBA function
467
Why is this program erroneously rejected by three C++ compilers?
386
Assign a variable inside a Block to a variable outside a Block
548
How to avoid using Select in Excel VBA
5
Input box Compile Error
2
VBA Microsoft Word - sequential numbers
0
Excel adding date to file name format error