Can anyone tell me how Microsoft Word comes up with the name for MSODataStore storage objects? I.e. what does the name represent? For example, here's the

hex of a word .doc file with the name in hex highlighted in the image:

What is this thing!? I know it's the name of a custom xml storage, but specifically why is it given a name in this form? Is there anyway of decoding the (oh so strange) name to find the underlying meaning? I've looked at numerous examples and can say:

Looking at the Docs for MSODataStore objects isn't very helpful. They say:

It being "unique" doesn't reveal why they've chosen this bizarre method. Just naming the storage "Bob/Mary1,2,3..." would be unique. But instead there's a 24 byte hex string, that they then 64bit(?) encode. If it's just a random string, then how do they check it's unique?

This thing is driving me nuts! Can anyone help with how this name is derived and why it's in the form it is?

To answer your question, we have to have a look at the binary file format used by Word and some specialties of the Custom XML storage. At the end there are some quick answers to your main point.

Binary Word documents use the compound document format (often also referred to as "structured storage"). This is a container format similar to a zip archive (but without compression). The specification of the format is available at the following URL:

The structure you are wondering about (starting at offset 0xC780 in your example) is a StructuredStorageDirectoryEntry:

So we can see now already that the field at offset 0xC780 is used to store the name of directory entry with a fixed size of 64 bytes to contain a Unicode string of length 32.

We can even look at the name if we open the file with a structured storage viewer application such as SSView: 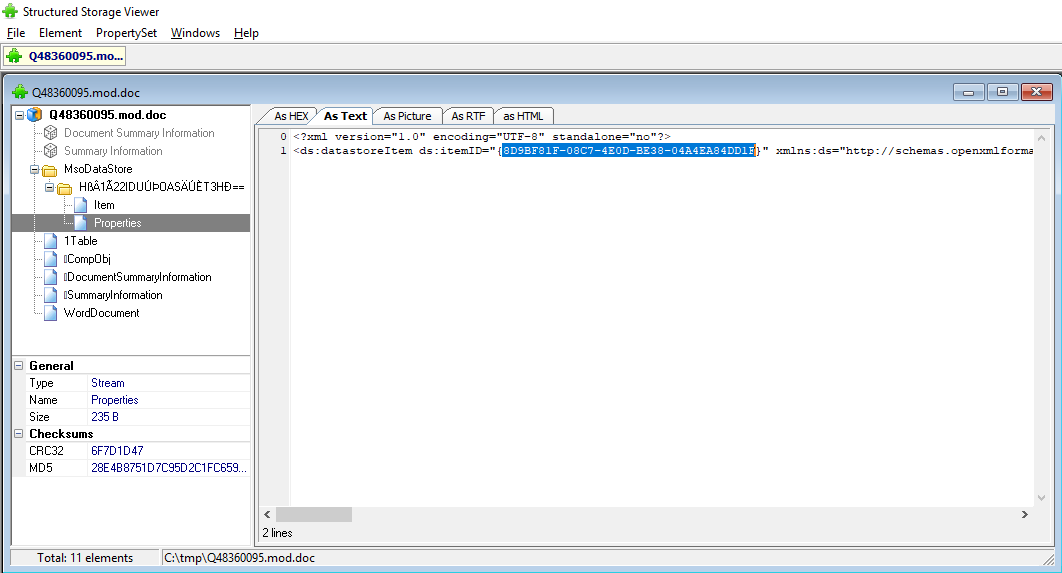 Given that this name is only the name of an object (folder) inside the container file format, it is obvious that changing this name does not change the contents or metadata of the Word document. However, this name must still be unique at the level of the container items. So if you have several custom XML parts in your document and null this value for each part, you will get a corrupt compound document file.

So lastly, where does the name actually come from? The name is indeed an encoded Guid value, namely the itemID of the data store (highlighted in the screenshot above).

How is the value encoded? As you already assumed the encoding is base64, however using a custom character table. This is not documented so we can only guess by playing around with different itemID values. You can do that for example by creating a Word document in Open XML format (*.docx), adding a Custom XML part (from the Developer tab of the Ribbon), changing the itemID value in the itemProps1.xml part of the document and then saving the document in binary .doc format.

After a bit of reverse engineering we can find that the following character table is used for the encoding:

as compared to the standard base64 table:

We can now write a function that maps between the standard encoding and the custom encoding used by Word:

Answers to your main questions:

Overwriting the name with zeros doesn't change the word document, or its metadata. It renders just as before.

As the name is just the name of a folder in the compound file container, changing it does not affect the actual contents of the Word document. The only requirement is that this name is unique.

Yes, it is the name of a folder/directory inside the container. You can see it when viewing the file using SSView.

It is the name of the folder, no offsets or pointers inside the file.

The fixed length is determined by the definition of the StructuredStorageDirectoryEntry struct. It is always 64 bytes long, and padded with zeros.

If I translate the hex to Base64, save as .bin and run the linux command file .bin it tells me it's either just "data" or in this case "ISO-8859 text, with no line terminators", which works out as "JYÕÝÊÒJTÝEÚØ FIDÔ0H5ÎÌÐ". Maybe it's a different binary to text encoding?

It is indeed base64 encoding. But for some reason Word uses a non-standard mapping of characters.

It doesn't appear to be a CLSID as this is often written separately and the number of characters doesn't add up.

Indeed, it is a CLSID or Guid value, namely the itemID of the Custom XML part embedded into the Word document.

Not the answer you're looking for? Browse other questions tagged .net xml ms-word base64 or ask your own question.

2327
Deep cloning objects
3920
How to enumerate an enum
2157
How do you display code snippets in MS Word preserving format and syntax highlighting?
2243
How do I get a consistent byte representation of strings in C# without manually specifying an encoding?
652
Binary Data in JSON String. Something better than Base64
1070
How do I parse XML in Python?
1056
What does <![CDATA[]]> in XML mean?
2171
How do you parse and process HTML/XML in PHP?
110
Why does base64 encoding require padding if the input length is not divisible by 3?
1475
Why not inherit from List<T>?