Official locator strategies for the webdriver

In the official W3c webdirver documentation, it's clearly stated that the location strategies are:

In THEORY, Selenium's docs are obsolete and the "real" story is in the new spec document. However...

I ran some tests on the latest Chrome's own Webdriver, and I can confirm that name and class name both work; however, they are not in the specs.

I remember reading on a Chromium issue that they would only ever implement the official Webdriver specs.

Now: I know the generic answer, where "specs are not always followed 100%" etc. However, what I'd like to know is:

Yes, you saw it right.

As per the current WebDriver - W3C Candidate Recommendation the Locator Strategies enlisted are as follows : 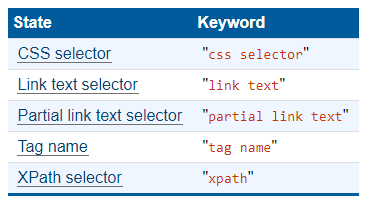 However, the JsonWireProtocol was once used to support the Locator Strategies enlisted below but currently the documentation clearly states it's Status as OBSOLETE :

The change was propagated through the respective client specific bindings. For the Selenium-Java clients here is the client code where we have the switchcase working for the users :

Now, your question must be why this change in the W3C Specs and in the clients. As per #1042 the Answer from the WebDriver Contributors was pretty straight as :

This keeps the specification simple as these can be implemented using the CSS selector, which maps down to querySelector/querySelectorAll.

Not the answer you're looking for? Browse other questions tagged javascript google-chrome selenium chromium chrome-web-driver or ask your own question.

-1
I'm using id as identifier to find element, but exception stack trace is showing css selector
-1
Selenium WebDriver Testing with Dojo IDs
563
Get HTML source of WebElement in Selenium WebDriver using Python
255
How to select a drop-down menu value with Selenium using Python?
108
How to get text with Selenium WebDriver in Python
125
Using XPATH to search text containing &nbsp;
94
What is the difference between cssSelector & Xpath and which is better with respect to performance for cross browser testing?
51
Select iframe using Python + Selenium
53
Can not click on a Element: ElementClickInterceptedException in Splinter / Selenium
59
Selenium Finding elements by class name in python
See more linked questions

5174
What is the most efficient way to deep clone an object in JavaScript?
4259
Which "href" value should I use for JavaScript links, "#" or "javascript:void(0)"?
4351
Setting "checked" for a checkbox with jQuery
3891
How do I test for an empty JavaScript object?
5346
What's the difference between using "let" and "var"?
3615
What is the !! (not not) operator in JavaScript?
3324
Get the current URL with JavaScript?
7966
What does "use strict" do in JavaScript, and what is the reasoning behind it?
5132
For-each over an array in JavaScript
6124
How to return the response from an asynchronous call