I just can't install the software (in Windows 10), have somebody else handled this issue? 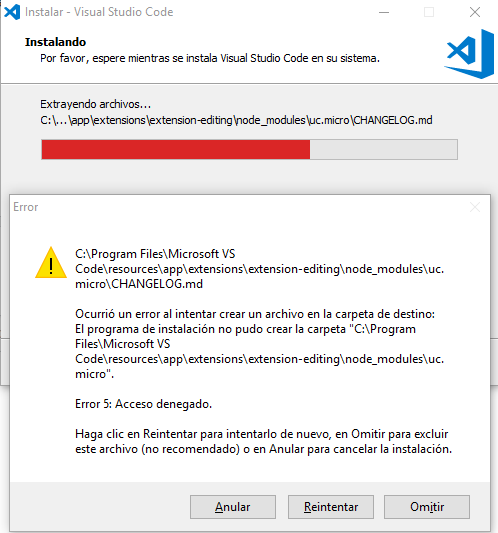 Is that just an access denied warning? It looks like it might be a security software issue - the folder is being recognized as malware. This problem is more and more prevalent as security software tightens security for today's conditions: https://github.com/Microsoft/vscode/issues/13559

Disable your anti-virus or security software and try again. If that doesn't work, please read some further suggestions below.

Please report what security software caused the problem for you - if any. This is important for the community. We are seeing more and more of these problems, and they can be very mysterious at first.

WARNING: Please note that certain security software may quarantine whole MSI files directly from the super-hidden, local cache folder these days! When this happens you really have a problem. Please read section 7 in this answer for information: How do I avoid triggering MSI self-repair with my WiX / MSI package? (don't be deceived by the question name - section 7 is relevant). You may be stuck with an un-uninstallable and un-upgradeable package.

Some Rules of Thumb For Deployment Debugging

Deployment problems tend to center around: something is locking resources (in use), something is blocking / preventing access (security software intervention, network unreachable), something is denying permission (ACL, privileges), something is corrupted (data file, OS settings), a runtime requirement is not met (missing dependencies).

Other Potential Causes of Setup Failure

Potential causes of setup failures that I can think of right now center around locking issues, connectivity issue, data corruption issues, system settings interference and various obscurities. This list is a bit mad - especially towards the end - it is just a brain dump.

Not the answer you're looking for? Browse other questions tagged installation visual-studio-code windows-installer or ask your own question.

16
MSI vs nuget packages: which are is better for continuous delivery?
15
How do I avoid common design flaws in my WiX / MSI deployment solution?
6
SQL Server 2017 installation is stuck
4
How do I avoid triggering MSI self-repair with my WiX / MSI package?
0
Visual Studio installer fails on AspNetDiagnosticPack.msi
1
Node.js - Cannot Install it is showing an error because of .msi
1
Error While Installing SSDT for VIsual Studio 2017 Professional
2
WiX Toolset PermissionEx Problem - App Does Not Run After Installation
1
NetBeans installer closes on a white screen after “Configuring the installer…”

20
Web setup MSI fails on Windows Server 2008
0
Starting a process as an other user in OnAfterInstall gets access denied
0
Windows installer failing with error “Error writing to file: System.Web.Extensions.dll. Verify that you have access to that directory.”
562
How do I install and use curl on Windows?
368
Android Studio installation on Windows 7 fails, no JDK found
1
how do i create the Setup windows service to uninstall then install service?
488
How can I switch word wrap on and off in Visual Studio Code?
585
What is a 'workspace' in Visual Studio Code?
0
Install and update failed because of access denied error on 'Code - Insiders.exe'