Google-colaboratory: No backend with GPU available

Here it is described how to use gpu with google-colaboratory:

Simply select "GPU" in the Accelerator drop-down in Notebook Settings (either through the Edit menu or the command palette at cmd/ctrl-shift-P).

However, when I select gpu in Notebook Settings I get a popup saying:

Failed to assign a backend No backend with GPU available. Would you like to use a runtime with no accelerator?

Of course, I get GPU device not found. It seems the description is incomplete. Any ideas what needs to be done?

You need to configure the Notebook with GPU device

You'll need to try again later when a GPU is available. The message indicates that all available GPUs are in use.

How may I use GPUs and why are they sometimes unavailable?

Colaboratory is intended for interactive use. Long-running background computations, particularly on GPUs, may be stopped. Please do not use Colaboratory for cryptocurrency mining. Doing so is unsupported and may result in service unavailability. We encourage users who wish to run continuous or long-running computations through Colaboratory’s UI to use a local runtime.

There seems to be a cooldown on continuous training with GPUs. So, if you encounter the error dialog, try again later, and perhaps try to limit long-term training in subsequent sessions.

My reputation is just slightly too low to comment, but here's a bit of additional info for @Bob Smith's answer re cooldown period.

There seems to be a cooldown on continuous training with GPUs. So, if you encounter the error dialog, try again later, and perhaps try to limit long-term training in subsequent sessions.

Based on my own recent experience, I believe Colab will allocate you at most 12 hours of GPU usage, after which there is roughly an 8 hour cool-down period before you can use compute resources again. In my case, I could not connect to an instance even without a GPU. I'm not entirely sure about this next bit but I think if you run say 3 instances at once, your 12 hours are depleted 3 times as fast. I don't know after what period of time the 12 hour limit resets, but I'd guess maybe a day.

Anyway, still missing a few details but the main takeaway is that if you exceed you'll limit, you'll be locked out from connecting to an instance for 8 hours (which is a great pain if you're actively working on something).

Add some pictures to make it clearer 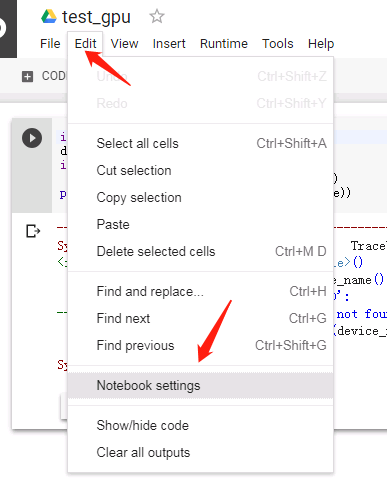 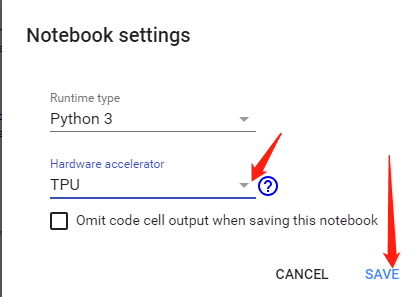 After Reset runtime didn't work, I did:

I then got a happy:

This is the precise answer to your question man. According to a post from Colab :

GPUs and TPUs are sometimes prioritized for users who use Colab interactively rather than for long-running computations, or for users who have recently used less resources in Colab. As a result, users who use Colab for long-running computations, or users who have recently used more resources in Colab, are more likely to run into usage limits and have their access to GPUs and TPUs temporarily restricted. Users with high computational needs may be interested in using Colab’s UI with a local runtime running on their own hardware.

Google Colab has by default tensorflow 2.0, Change it to tensorflow 1. Add the code,

%tensorflow_version 1.x Use it before any keras or tensorflow code.

Not the answer you're looking for? Browse other questions tagged google-colaboratory or ask your own question.