Could not load file or assembly 'System.Runtime.InteropServices.RuntimeInformation

I am getting this error whenever I try and run a webjob project with application insight and entity framework.

System.IO.FileLoadException: 'Could not load file or assembly 'System.Runtime.InteropServices.RuntimeInformation, Version=0.0.0.0, Culture=neutral, PublicKeyToken=b03f5f7f11d50a3a' or one of its dependencies. The located assembly's manifest definition does not match the assembly reference. (Exception from HRESULT: 0x80131040)'

I have installed the following nuget packages

This all works with a new Visual studio 2017 webjob project, its when I try and include an existing code base, primarily using entity framework that I get this error. When I look at the reference in the one that works I don't have the System.Runtime.InteropServices.RuntimeInformation, yet it has been added to the project with entity framework. It seems to be part of .net standard, but how come I don't need .net standard for my new console app! 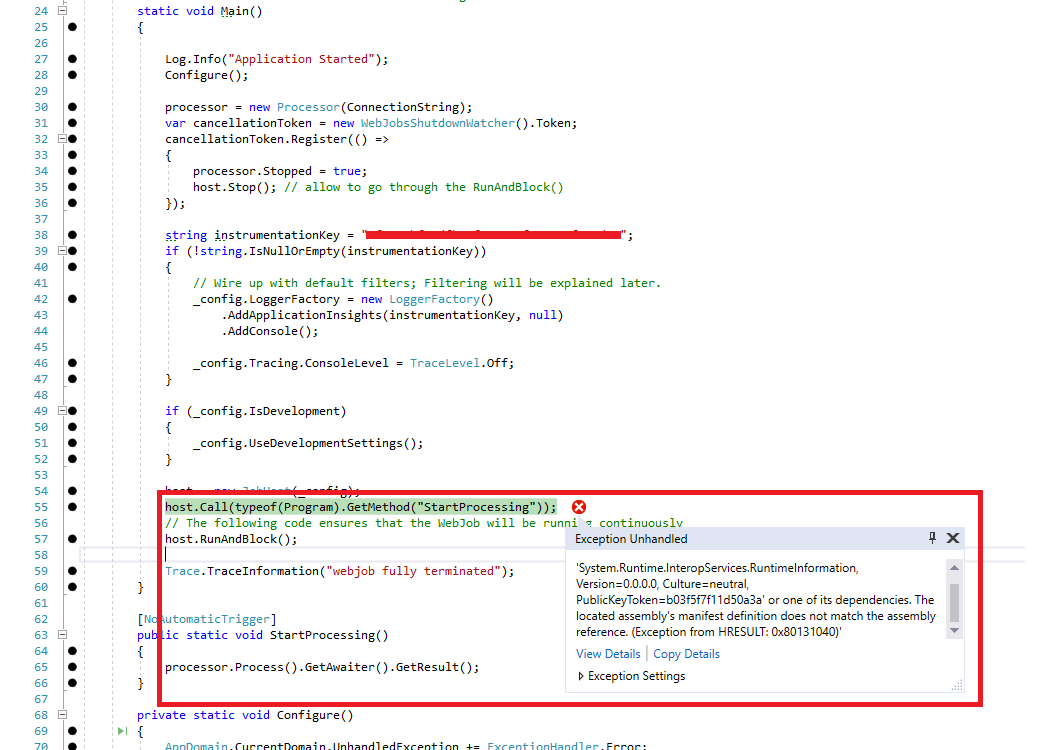 I have also tried adding this to the project file but this didn't work.

Any help would be greatly appreciated

Confirming the comment made above by dwilliss also worked for me. The solution was to get rid of:

(In my case from the app.config, for a Windows Service.) My project has an indirect dependency to System.Runtime.InteropServices.RuntimeInformation only. It is a dependency of a NuGet package I imported.

Could you be missing the loaded assembly from your configuration file? Ensure you have something similar to the following within your web.config. NuGet would normally do this but maybe it hasn't and it doesn't know what to load in

If you have updated a project's .NET runtime version from a version before 4.7.1 to 4.7.1 or later then uninstall the Nuget package, delete / comment out the App.config part if it remains, and re-add the reference from the framework. It is in the framework from 4.7.1 onward, before that you had to add a Nuget package.

[edit]... as per Michael's comment above that I upvoted before living memory.

This type of an error sometimes also occurs when you add a project reference from some different platform and try to build it. Remove the references and that should work.

Not the answer you're looking for? Browse other questions tagged c# azure azure-application-insights webjob interopservices or ask your own question.