How to update Spyder?

Everytime I start Spyder (with Anaconda) I get a message saying that my version is outdated and I should update it, so I followed the instructions Spyder's own website gave me, which is running the following commands:

But Spyder tells me that syntax is invalid. What should I do?

(Spyder maintainer here) Those commands are not meant to be run inside Spyder consoles, but in a system terminal (cmd.exe on Windows, xterm on Linux or Terminal.app on macOS). And please don't forget to close Spyder before doing that.

I updated the text in our Releases page to make that crystal clear.

From Anaconda home locate the gear in Spyder's frame and press "Update application". 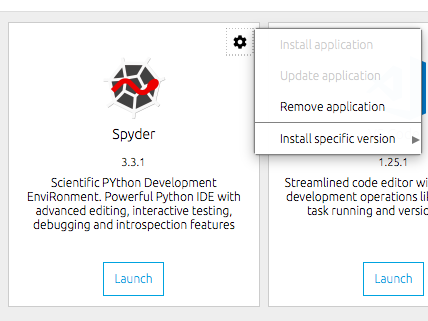 You need to run those commands on a console with administrative rights, in windows, or with a sudo before them on linux.

I tend to run these three lines in order every time I need to update:

In Windows I put those three lines in the end of a .bat file (just create a new .txt and then change it's format), right after the code to make sure it has administrative rights.

Updating qt, pyqt and spyder last means sometimes one of those three will rollback an update made to one or more of their dependencies, but in doing so it ensures that in the end spyder will run.

Not the answer you're looking for? Browse other questions tagged anaconda spyder updating or ask your own question.