Create objects with ground plane detection only once with Vuforia & Unity

I am trying to create an AR app using Unity & Vuforia. I have a 3D model that needs to be spawned when ground plane is detected.But this needs to happen only once. The way Vuforia work is, it keeps on spawning objects when new plane is detected. So what i need to do is either detect plane only once or spawn the object only once. As i am new to Unity, i need help doing this. Great if someone could tell me what i need to do to achieve this.

Vuforia has updated.Now There is no DeploymentStageOnce script.Inorder to stop duplicating while we touch, we have to turn off Duplicate Stage in Content Positioning Behaviour (Script)Check the Inspector when we click Plane Finder. 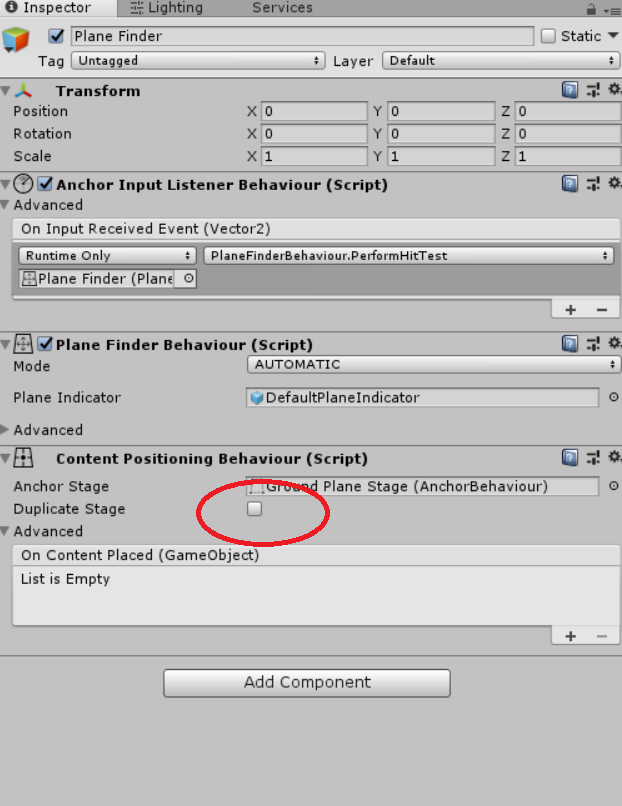 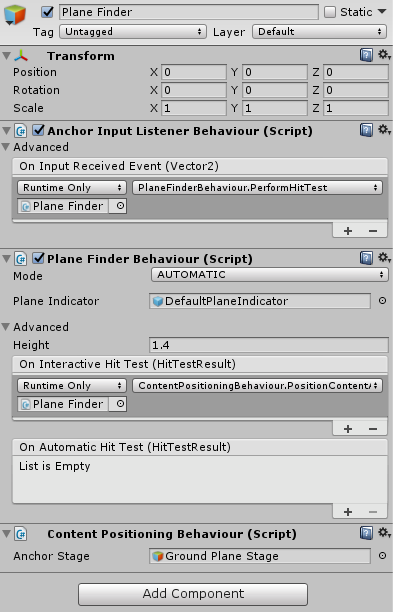 The Plane Finder object has a Behaviour component attached that calls a Position Content method if a plane was found. That method belongs to the Content Positioning Behaviour and it makes an instance (Clone) of your Ground Plane Stage. In order to avoid more than one instance you should import the vuforia Deploy Stage Once script located here: https://library.vuforia.com/articles/Solution/ground-plane-guide.html and you should change the Plane Finder Behaviour as the following:

I struggled a long with it, in short we must disable AnchorInputListenerBehaviour after hit. 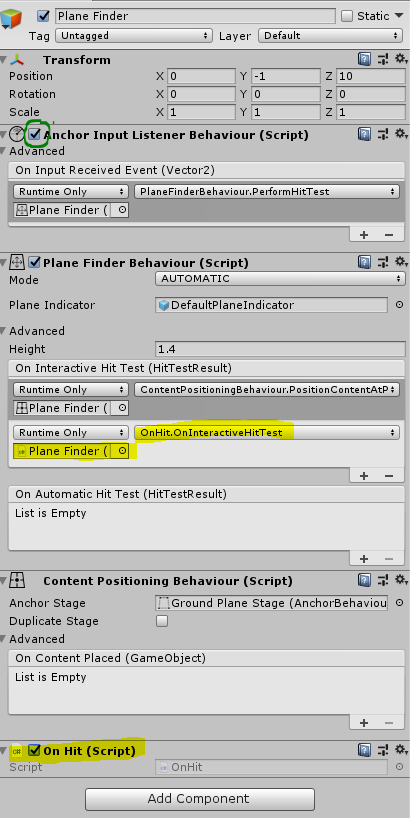 That's all, I hope it will be useful. 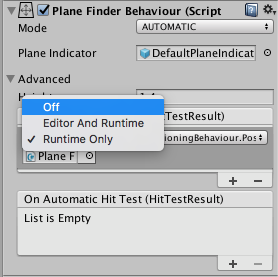 go to "Advanced" setting and "On Interactive Hit Test" script -> Select "Off" option for the script.

Most of the answers are correct but kind of obsolete, the correct way to do that is by code.

Create for example a gameObject called GameManager and pass the GroundPlaneStage and a prefab of the object you want to spawn to a script attached to that GameManager for example call it GameManagerScript.cs, and create a small function called spawnObjects which does the following:

then after that go to the PlaneFinder specifically to the PlaneFinderBehaviour.cs component you will have callbacks for OnInteractiveHitTest and OnAutomaticHitTest, in your case you need the OnAutomativeHitTest, click + and add a new callback (the function spawnObject in code above like in the image below)

I hope that helps

Introduction to Ground Plane in Unity

Not the answer you're looking for? Browse other questions tagged c# unity3d vuforia or ask your own question.

0
i trying to Vuforia in my unity project but the script is not working
0
How to edit scripts in Vuforia so that i can write functions with touchcount?

0
reduce vertices and triangles for plane made with unity
2
vuforia unity pause tracking or augmentation
3
Placing objects automatically when ground plane detected with vuforia
3
Trigger custom method when PlaneFinderBehaviour receives input with Vuforia 7
1
How to limit the number of created objects with ground plane detection with Vuforia and Unity
0
VUFORIA Ground plane detection & Rigid Body
0
i am passing data from android to unity and based on the name it sets the state active of that object. But i keep geting game object null reference
0
Networked AR Unity can't make a bullet a child of the ground plane stage