Dart SDK is not configured

I installed Flutter and set up Android Studio. Then I cloned an example of flutter on GitHub (https://github.com/flutter/flutter) and launched it in Android Studio, but it warns me "Dart SDK is not configured", this happened to my co-worker as well. But if I create a new project in Android Studio, no problem at all.

What I have done:

Last week, I can run their example thru command line (in that dir),

but now I it shows some errors with Gradle.

FAILURE: Build failed with an exception.

Please review your Gradle project setup in the android/ folder.

I had the same problem after importing a flutter project from git. These are the steps to solve the problem.

This solved the issues for me.

It usually happens with projects that were created in other machines. To fix this on Android Studio 3.1.3:

Edit 2019-05-28 - I don't know how long this option is enabled but I have noticed that in Android Studio 3.4 it's easier to Enable Dart Support in projects that were developed in other machines.

I had the same Dart SDK issue and I used this for my solution. To remedy the issue without having to use the terminal to test my programs each time the steps I followed are as follows.

I went through these steps using IntelliJ IDEA so they should be pretty much the same. If that didn't work, sometimes making a dummy Dart project can get things working again. That fixed a similar issue for me.

In my machine, flutter was installed in

I set dart sdk path as

It may help to use the doctor with -v

for me the result was as

Then the dart path can be set as

Flutter is usually installed(per illustrations) in.

You can try running flutter doctor for installation issues. Also run flutter upgrade to get the latest version of Flutter and Dart SDKs.

DART SDK can be found at

In case other answers didn't work for you

If you are using *nixOS or Mac

Most of the options above have shown how to configure Dart in the Windows System (If you have installed Dart and Flutter Doctor is showing all good).

On MacOS this option is available under Android Studio > Preferences ('Command' + ',')

As pointed above also, this should solve most of the use-cases. If error still persists, you can go File > Invalidate Caches/Restart. 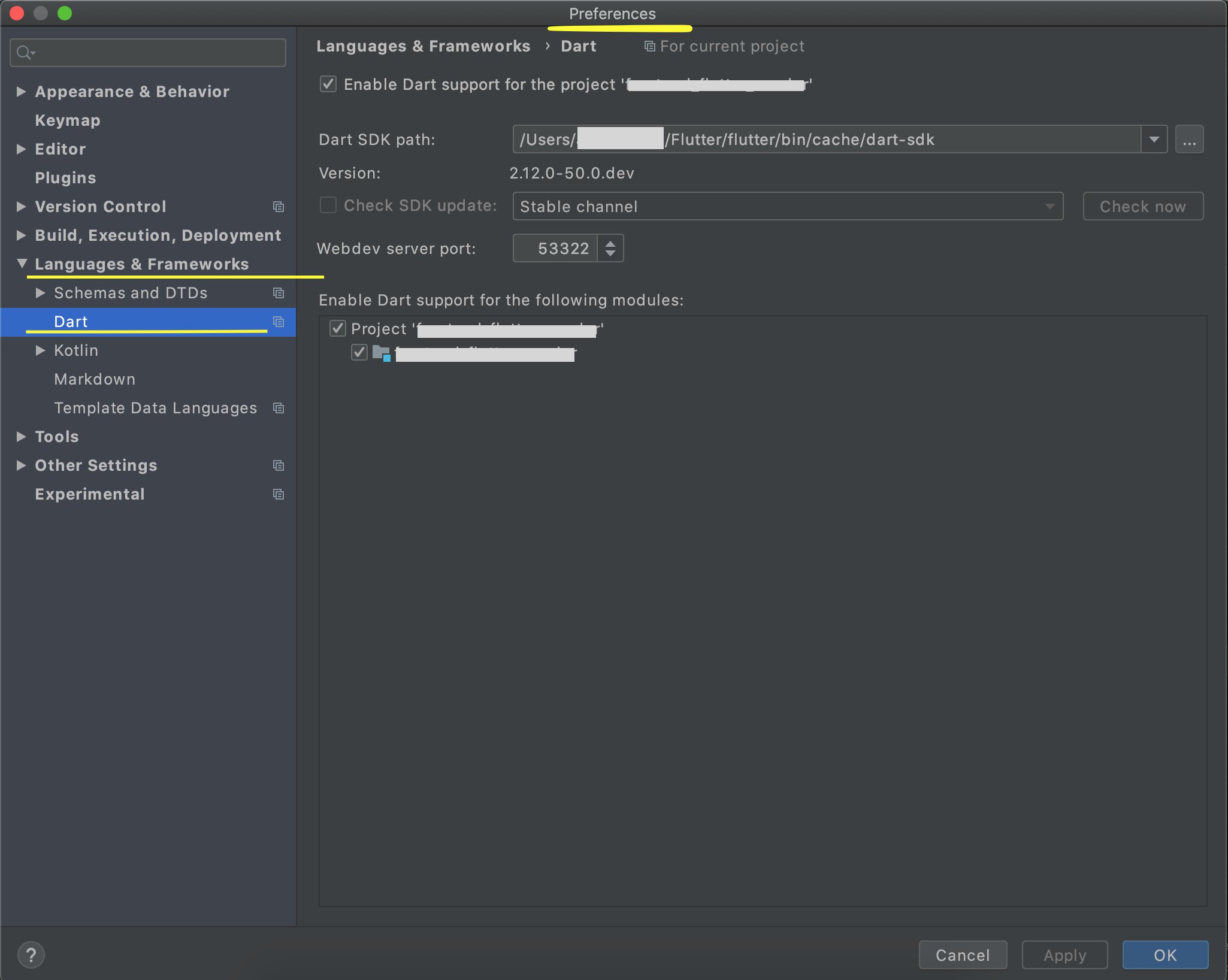 If you are using Android Studio and getting this message 'Error: Dart SDK is not found in specified location',

My fix was this.

It normally happens when you are download projects from the github. normally dark sdk contains inside flutter.

you can solve this issue following these few steps

I followed the following steps to solve this problem:

There under the: 'flutter SDK path', put in the location where you have installed Flutter Mine was at: C:\src\flutter

Click Apply then OK and the android studio will refresh. The problem will be solved.

then apply your settings.

-- Just delete the .dart_tool folder (mostly the first folder in your project)

-- Now Enable the Check Box and set the dart-sdk path, now it will not show that warning.

And Your project will sync successfully.

Steps to fix this.

Please note the path to the Dart SDK:/usr/local/opt/dart/libexec 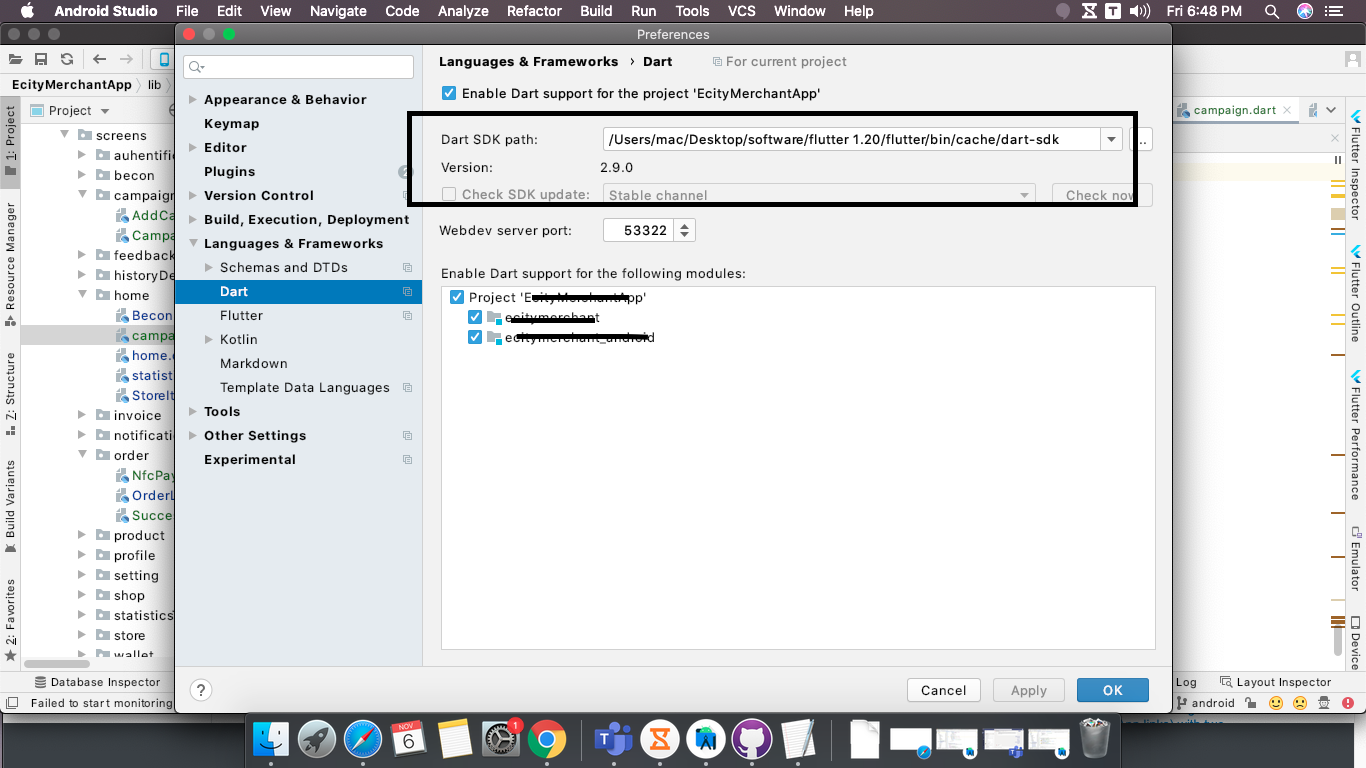 Open up android studio..go the file menu....there u will find Invalidate caches/Restart..click it and respond to the pop up as Invalidate and Restart

Your android studio will get restarted.And its all done.

It really helped me.

Enter that value as your Dart SDK path.

This is how you get Dart SDK path, follow the given steps copy the Dart SDK Path, which is in Flutter SDK, Go to location where your Flutter SDK Situated, then,

I have read on all the previous answer and after some time trying to get this working I found that the IntelliJ Flutter plugin does not want the path to which flutter instead it needs the base installation folder.

So the 2 steps which fixed:

That will then ask you to restart IntelliJ and you should get both Flutter and Dart configured: 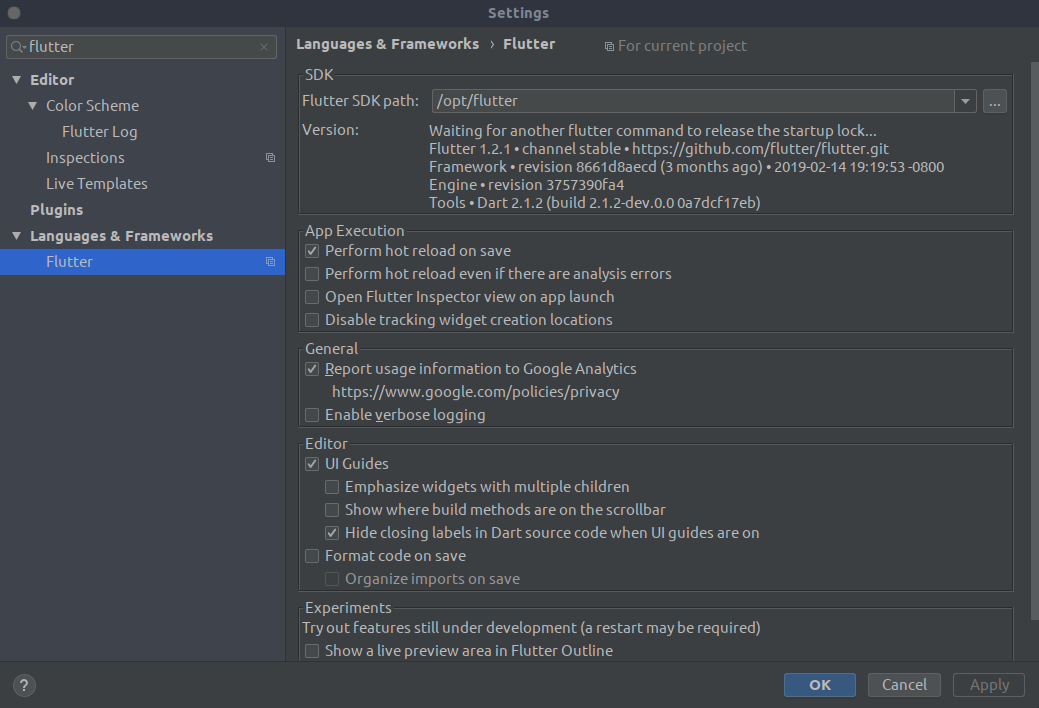 In my case Dart also installed separately for dart development with latest. So when IntelliJ suggest me to configure dart, I hit it and then it pointed to C:/tools/dart that was the case.

So, I had to go to File->Settings->Language & Framework->dart and add the SDK path to my Flutter sdk path with Dart SDK C:\flutter\bin\cache\dart-sdk.

Note that as others mentioned if you pointed out the Flutter SDK path, you may not be needed to setup Dart SDK path because of Flutter SDK comes with Dart SDK in it.

Flutter SDK path should be empty here. The problem is in here

Solved mine on macOS by clicking on

As of Flutter 1.21, the Flutter SDK includes the full Dart SDK. So if you have Flutter installed, you might not need to explicitly download the Dart SDK, unless:

Personally, as I mostly work on a laptop, I've offloaded my main drive from all the space required by the development tools, moving everything to an external drive as described in this answer

AFAIK, Dart is only dependent on having the $SDK/bin directory available in your systems $PATH variable. As for installing the SDK itself, both Dart and / or Flutter + Dart I find that downloading a .zip file of the channel (stable, beta or dev) you want, unzip it to a place on your hard-drive and include the path to the SDK /bin directory early in the $PATH is the way to go. As described in the Dart Documentation

Running commands from the command line is different from within an IDE (or other GUI app), as GUI apps usually store configuration in its own config files, while the various shells store its configuration in shell startup files using amongst other the $PATH variable to decide if it has knowledge of the given application / command. It also defines the order to look for the commands.

Unless the GUI app (IDE in this case) spawns a shell as part of its startup routine and gets the environment populated that way, these two configurations can be totally separate, and point to different tools / paths / utilities.

This would explain the scenario you mentioned:

But if I create a new project in Android Studio, no problem at all.

Here you can tell Android Studio which shell the IDE itself should take its environment from (as a path to your login shell of choice), define new variables and make sure the Shell Integration option is enabled.

Now you can have the same (or different if you wish) environments for running, say, pure Dart projects via the Command Line and for Flutter Apps running in the IDE, by picking the values you should already have defined in your shell startup file(s).

Note: Starting with Android Studio 4.2, the ANDROID_SDK_HOME environment variable is deprecated and has been replaced with ANDROID_PREFS_ROOT

These things are subjects for change, so always check with the Android Studio configuration guide and the Android SDK Related part of the installation guide before setting these. It isn't always required, but is a good way for troubleshooting.

After trying a bunch of stuff, and several times doing a fresh git clone for the flutter project .. all to no avail, finally the only thing that worked was to download the MacOS .zip file and do a fresh install that way

After installing Flutter, the best way to install Dart sdk is by creating a new project. In this window, click INSTALL SDK. This installs all necessary to work properly.

In my case it was updating flutter sdk path in android studio, preferences.

I solved it, try:

In fact, it's a good habit to check your settings before you run the app.

wsq_starwsq_star
1711 bronze badge
1
Add a comment  |
1
2 Next
Highly active question. Earn 10 reputation (not counting the association bonus) in order to answer this question. The reputation requirement helps protect this question from spam and non-answer activity.

53
Can I install Xcode on an external hard drive along with the iPhone Simulator.app?
56
dart:ui:1: Error: Not found: dart:ui. flutter/dart:
8
After Flutter GIT project checkout, unable to run the project
1
flutter flutter-web-sdk-windows-x64 failed download
-1
Flutter example project from version control
0
How to config flutter sdk in android studio
0
Flutter dart showing errors
0
How can I run an independent dart file in Visual Studio Code when my app is already running?