Importing a Maven project into Eclipse from Git

How can I get the effect of choosing to import from both Maven and Git and have Eclipse properly generate my project?

It seems I can do one or the other but not combine both so I get a correctly generated project.

If you don't already have the Git connector for M2Eclipse install it. M2Eclipse will help you along by prompting you on the Import menu.

Note that in the search box you may have to enter "EGit" instead of "Git" to find the right connector.

With that done, simply go to the EGit repository, bring up the context menu for the Working directory and select "Import Maven projects...".

I would perform a git clone via the command line (outside Eclipse) then use File -> Import... -> Existing Maven Projects.

Your projects will be understood as using Git and Maven. It's the fastest and most reliable way to import IMO.

First of all you'll need to have a few Eclipse plug-ins installed. So use eclipse IDE software install feature in the help dropdown menu → Install new software, and add link to Available Software Site, then install it.

Clone(download) your Maven Projects from Git 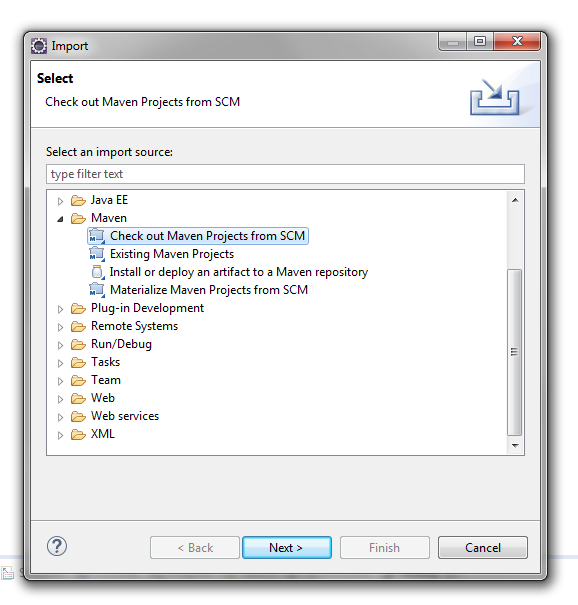 As of this (updated) writing, a working setup is the following:

You can certainly "Import" -> "Maven" -> "Check out Maven Projects from SCM", and this is the quickest way. However, such direct import currently does not give you control over the cloned repository folder name. You may be better off working from the "Git Repository" View and perform either a "Clone from a Git Repository and add the clone to this view", followed by an "Import Maven Projects" from such clone; the longest way would be to do your manual cloning and then "Add an existing local Git Repository to this view", followed again by an "Import Maven Projects". Either case you have full control on the cloned folder.

A final comment on a side issue that made me cry in frustration. As far as I know, if the cloned repository lies on the root of your Eclipse workspace, and your Maven project file hierarchy has a POM on its root, then importing such root project will rename the cloned folder (with the template you chose, defaults to [artifactId]). Without changing your project structure and without keeping files outside your workspace, you can easily work around this issue by cloning on a subsubfolder of the workspace folder.

I have been testing this out for my project.

Here's my workaround, this is a solution to these issues:

Import without installing any additional connectors for Mylyn:

You should note that putting generated metadata under version control (let it be git or any other scm), is not a very good idea if there are more than one developer working on the codebase. Two developers may have a totally different project or classpath setup. Just as a heads up in case you intends to share the code at some time...

I have a maven project with three submodules that is managed in git. I set them up in eclipse as follows:

Direct answer: Go to Files>>Import>>Git>>Project From Git (you should have GIT installed on Eclips)

I would prefer to import projects into Eclipse as maven projects rather than git project. Doing this will still allow the project contents to be recognized as git contents. You can continue to perform git operations from Eclipse. As you have mentioned the reverse is not true.

The nature of a project in Eclipse is not based on the SCM which holds the project, but on the type of project - whether war or jar, etc. - which is automagically determined when the project is imported as maven project.

I would be hesitant to check-in to SCM IDE-specific metadata. Doing so assumes a lot of things - all developers are using the same IDE or version of the IDE, perhaps same version of JDK/JRE, that they continue to use the same version throughout the project lifecycle and so on.

Can't you import it as a git project and then (if you have the m2eclipse installed) right click on the project in the Package Explorer > Maven > Enable Dependency Management?

After checking out my branch in Egit, I switched to the Java View, then used File-->Import, Git-->Projects from Git, then selected the top level maven directory. This was with Eclipse Kepler.

Instead of constantly generating project metadata via import->maven command, you can generate your project metadata once and the place it in your git repository along with the rest of your source code. After than, using import->git command will import a proper maven-enabled project, assuming you have maven tools installed.

Make sure to place into the source control system all files in project dir that start with '.' such as .classpath and .project along with the entire contents of the .settings directory.

Not the answer you're looking for? Browse other questions tagged eclipse git maven or ask your own question.

59
Eclipse Open declaration in Java project
19
How do you get git integration working with m2eclipse?
4
Eclipse + Maven Plugin + EGit Plugin = Checkout from GitHub a specific Branche and Tag?
3
Eclipse and Maven via command line
0
How can I set up a quick "dummy" server on my machine? (Phonegap accessible)
-1
Download Hadoop source configure it on eclipse
0
How to import project in 3rd party repository as library for eclipse project

7726
How do I remove local (untracked) files from the current Git working tree?
2796
How do I clone a Git repository into a specific folder?
3572
Remove a file from a Git repository without deleting it from the local filesystem
2402
How do I revert all local changes in Git managed project to previous state?
1297
'Must Override a Superclass Method' Errors after importing a project into Eclipse
2369
How do I delete a file from a Git repository?
2343
Branch from a previous commit using Git
5011
How to determine the URL that a local Git repository was originally cloned from
2523
How do I safely merge a Git branch into master?
985
How to solve "Plugin execution not covered by lifecycle configuration" for Spring Data Maven Builds