Search for all templates using scikit-image

I am trying to follow the tutorial from scikit-image regarding Template Matching (check it here).

Using just this example, I would like to find all matching coins (maxima) in the image, not only this one which gave the highest score. I was thinking about using:

but the problem is that it finds also very small local maxima, which are just a noise. Is there any way to screen numpy array and find the strongest maxima? Thanks!

To find all the coins the documentation suggests "...you should use a proper peak-finding function." The easiest of these is probably peak_local_max (as suggested in the comments) which is also from skimage, and has a manual page here. Using some reasonable numbers in the *args gets the peaks out of the response image.

"Note that the peaks in the output of match_template correspond to the origin (i.e. top-left corner) of the template."

One can manually correct for this (by translating the peaks by the side lengths of the template), or you can set the pad_input bool to True (source), which as a by-product means that the peaks in the response function line up with the center of the template at the point of maximal overlap.

Combining these two bits into a script we get something like: 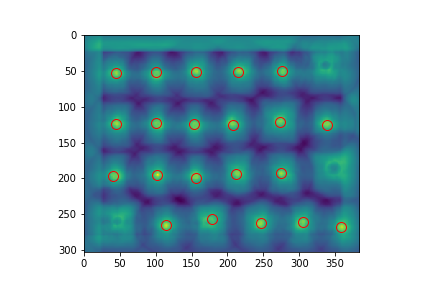 I have been digging and found some solution but unfortunately I am not sure if I know what exactly is done in the script. I have slightly modified script found here: 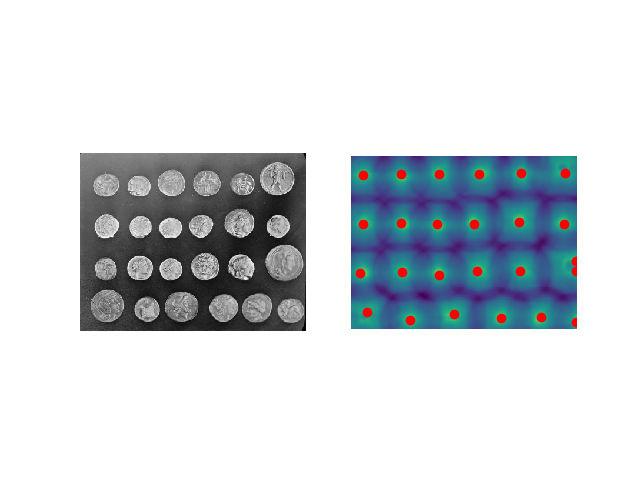 I also realized, that coordinates of found peaks are shifted in comparison to raw image. I think the difference comes from the template size. I will update when I will find out more.

EDIT: with slight code modification I was able also to find places on the input image:

865
Changing the image source using jQuery
704
How to get image size (height & width) using JavaScript?
4010
Iterating over dictionaries using 'for' loops
975
Peak detection in a 2D array
1569
Save plot to image file instead of displaying it using Matplotlib
1843
Image Processing: Algorithm Improvement for 'Coca-Cola Can' Recognition
288
How can I convert an RGB image into grayscale in Python?
4
Scikit image color filtering and changing parts of image to array
2
Count number of objects using watershed algorithm - Scikit-image