I am using Google Speech API in my Django web-app. I have set up a service account for it and am able to make API calls locally. I have pointed the local GOOGLE_APPLICATION_CREDENTIALS environment variable to the service account's json file which contains all the credentials.

This is the snapshot of my Service Account's json file: 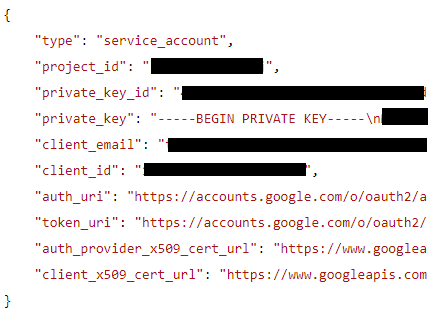 I have tried setting heroku's GOOGLE_APPLICATION_CREDENTIALS environment variable by running

^^ The command gets saved into the environment variable

I tried setting heroku's GOOGLE_APPLICATION_CREDENTIALS env variable to the content of service account's json file but it didn't work (because apparently the this variable's value needs to be an absolute path to the json file) . I found a method which authorizes a developer account without loading json accout rather using GOOGLE_ACCOUNT_TYPE, GOOGLE_CLIENT_EMAIL and GOOGLE_PRIVATE_KEY. Here is the GitHub discussion page for it.

Depending on which library you are using for communicating with Speach API you may use several approaches:

EDIT: Assuming that you are using google official client library, you have several options for authenticating your requests, including that you are using (service account): https://googlecloudplatform.github.io/google-cloud-python/latest/core/auth.html You may save your credentials to the temp file and pass it's path to the Client object https://google-auth.readthedocs.io/en/latest/user-guide.html#service-account-private-key-files (but it seems to me that this is very hacky workaround). There is a couple of other auth options that you may use.

EDIT2: I've found one more link with the more robust approach http://codrspace.com/gargath/using-google-auth-apis-on-heroku/. There is ruby code, but you may do something similar in Python for sure.

Let's say the filename is key.json First, copy the content of the key.json file and add it to the environment variable, let's say KEY_DATA.

If my command to start the server is node app.js, I'll do echo $KEY_DATA > key.json && node app.js

This will create a key.json file with the data from KEY_DATA and then start the server.

Save the data from KEY_DATA env variable in the some variable and then parse it to JSON, so you have the object which you can pass for authentication purposes.