How do order of operations go on Python?

I am supposed to solve the equation.

My answer seems to come out as 8 when using PEMDAS:

But when putting it into python, I get a 2. Why is this so?

It seems the programs order is as such:

PEMDAS is P, E, MD, AS; multiplication and division have the same precedence, and the same goes for addition and subtraction. When a division operator appears before multiplication, division goes first.

So // and * are executed first; multiplication and division fall in the same group, not a set order here (MD doesn't mean multiplication comes before division):

So 7 // 2 is executed first, followed by the multiplication by 3. You then get the subtraction from ten and adding one at the end.

In math, it doesn't matter what you evaluate first, as long as you respect the argument grouping. In Python, if you evaluted b() and c() first in a() + (b() + c()) just because they're in parentheses, you could get a completely different result, because Python functions can have side effects.

Python expression evaluation mostly works from left to right. For example, in a() + b() + (c() * d()), evaluation order goes as follows:

This is despite the high precedence of * and the parentheses around the multiplication.

PEMDAS is better expressed as

How do order of operations go on Python?

I don't know what a PE(MD)(AS) is, but Python order of operations (order of precedence) rules go as the "Operator Precedence" table from the official documentation says they go. :)

To read all the footnotes in the table, click on the link just above. 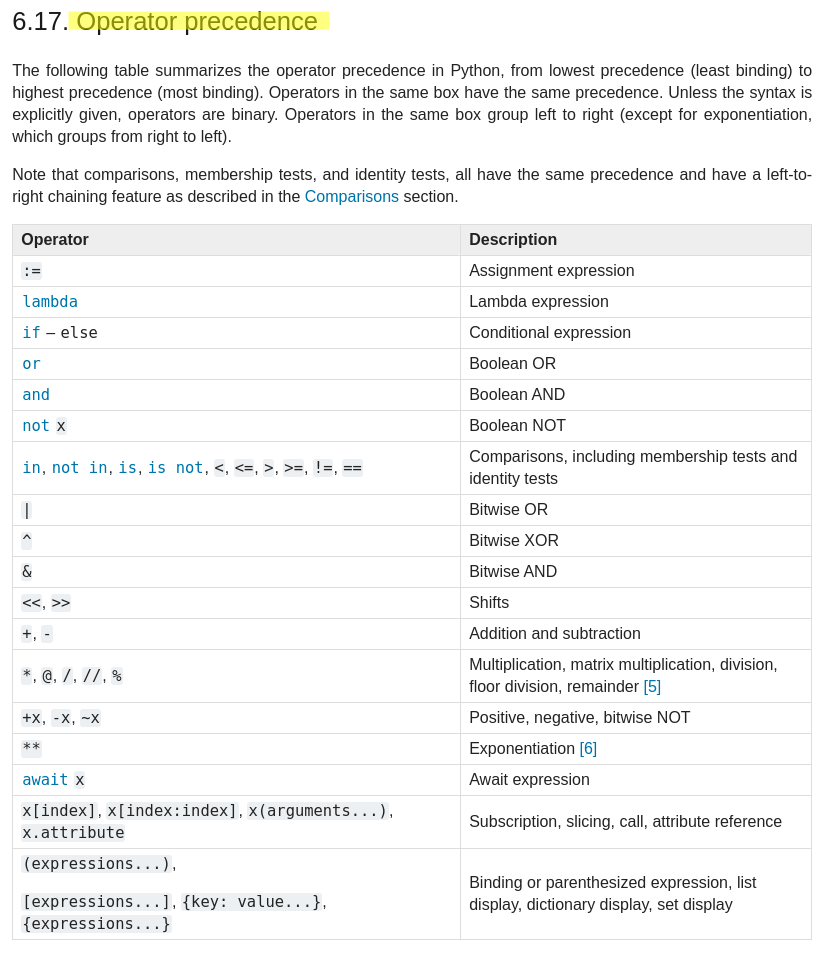 Reading I Still Need to Do

I think that python doesn’t follow PEMDAS or BODMAS, unless you put the parentheses/brackets around it. So basically I’ll have to mentally do it before writing the program

This site is temporarily in read only mode and not accepting new answers.

Not the answer you're looking for? Browse other questions tagged python python-3.x math .

-5
what is the order of mathematical calculations in python?
1
Order of operations for Python 2.7
0
Calculating GPA with function in Python
0
What is the Order of evaluation without ()?
0
Using enumerate in nested loops [Python]