Git pull / push - unable to access HTTPS, SSL routines seem to be down

I'm using Git (and GitHub) on a daily basis and everything has been working fine and all of a sudden, I can no longer communicate with my remote GitHub repository through my Git commands. When I try to "Git pull", it gives the following error:

So, I tested across multiple repositories, and I get the same errors on my computer. I had someone else interact with those same repositories, and it works fine for them. Prior to this error, I did an "npm install sharp" on a project and that ended up failing, and I suspect this may have messed with some SSL setting, but that's a wild guess!

Any general thoughts or guidance would be much appreciated!

If it's helpful at all, here is my environment:

Updating TortoiseGit and GCM didn't help me, but updating Git itself did, as per @Frederic's advice in comments.

To make sure the new version of Git installs properly and doesn't conflict with previous installations (it might, if you used TortoiseGit's, because it would use different folders and mess with PATH variable), remove the existing Git installation before installing the updated Git. Might also need to install with administrator rights.

You're likely running into an incompatibility with GitHub's deprecation of weak SSL encryption protocols:

The solution will vary, but for Windows you likely need to upgrade the Git credential manager to 1.14.0

If you are using Android Studio or IntelliJ IDEA, updating Git to the latest version and changing the path to point to the new version solve the problem for me. 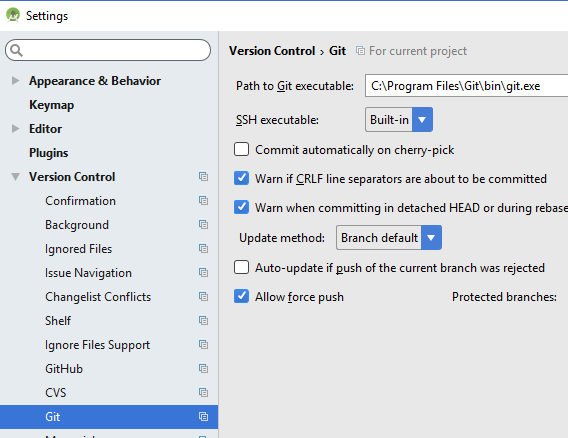 Using TortoiseGit, I did all of the other fixes/updates given for this and still no success. I found this: Can't git push/pull/fetch suddenly

This is what worked for me.

Updating Git was not enough in my situation. After debugging for several hours, this was my fix:

I had this same problem while pulling code from GitHub on my Visual Studio Code terminal. I found the advice in the previous answers useful and hacked a solution together following the steps below:

This repository was quite useful.

I hope this helps someone.

I'm using the Git command line on Windows 8 x64. In addition, my antivirus software checks HTTPS traffic by default. Like other people in answering this question, I use GitHub almost daily.

Then I started playing with switching the SSL backend:

P.S.: Instead of commandline, you can just reinstall the latest Git, selecting "Use native Windows SSL validation library".

P.P.S.: The case (3) seems to be a bug in the schannel library, because the MITM certificate my antivirus software uses is whitelisted on my machine.

On macOS, you can install the latest git via Homebrew.

Same for me with Git 1.9.5.msysgit.1 too. I tried to install https://github.com/Microsoft/Git-Credential-Manager-for-Windows/releases/tag/v1.14.0, but no change.

Actually, nothing happen after installation; maybe I'm doing something wrong? (That may not help for the initial question, but for other people, yes!)

Yeah, I encountered the same issue on a pull request today and the solution was to simply update Git by downloading the latest (2.16.2) 64-bit version of Git for Windows. It was released 5 days ago, on 2018-02-20.

A quick solution would be git config --global http.sslVerify true, but it is not recommended as it defeats the purpose using SSL.

A second and better way is to use ssh keys rather than an SSL URL.

After running the command, the following message will appear:

Give the path for the key to be stored in, for example, enter the file in which to save the key (/h//.ssh/id_rsa): C:\Users\Public\my-new-ssh-key

• Run the following command: ssh-add C:/Users/Public/my-new-ssh-key Note: use forward slash in the path to the newly created SSH key.

After that, add the contents of the file my-new-ssh-key.pub and add it in the text area for Add public key (Bitbucket, GitHub, etc.)

While connecting to a remote repository to fetch, pull, push, etc., I had the same error:

I just reinstalled Git 64-bit in place of 32-bit and that fixed the issue.

After installation, verify the Git path in environment variables. It should be:

This is an issue with IntelliJ and RubyMine. GitHub must have disabled SSL (PCI compliance maybe?) in favor of TLS. If you open Settings in IntelliJ or RubyMine and navigate to Version Control > Git, you'll see it's using a git.exe installed under the application's path. You should download the most current version of Git and change the path in your VCS settings to point to that, e.g. C:\Program Files\Git\bin\git.exe if you install it on Windows. Works like a charm after that.

Sometimes, this is caused by outdated msysgit which is using old ssl and not maintained any more, you can install latest git for windows, and point the git.exe path in tortoise setting to it, then this problem gone.

Git version upgrade did the trick for me. I had the version 1.9.5 and so and I upgraded to 2.21.0 on windows. Also upgrading is very easy. We don't need to uninstall the older version. Download the latest Git installer and just keep on pressing next using default options and the version will be changed to new version and all the old settings will still be working like ssh keys etc. We don't need to generate the keys again and put on github or any other repository.

Earlier my https protocol cloning was not working and giving error

Once I downloaded new version and ran the same clone command it worked without any issues.

I also came across to this problem recently

Encountered a similar error. On windows, Updated git on windows to the latest version. That fixed the problem.