My company distributes an installer to customers via our website. Recently when I download via the website and try to run the installer I get the warning message:

Windows Defender SmartScreen prevented an unrecognized app from starting. Running this app might put your PC at risk.

If I right-click on the installer and choose Properties I note the following: 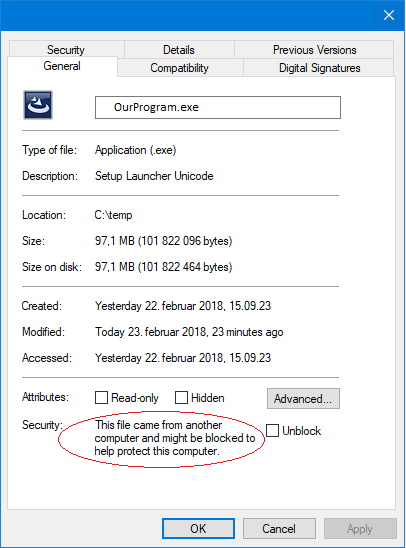 Our installer is signed.

How do I find the reason for the Windows Defender SmartScreen warning?

I have not managed to find any log file for Windows Defender nor found anything in the Event Viewer.

After clicking on Properties of any installer(.exe) which block your application to install (Windows Defender SmartScreen prevented an unrecognized app ) for that issue i found one solution

If you have a standard code signing certificate, some time will be needed for your application to build trust. Microsoft affirms that an Extended Validation (EV) Code Signing Certificate allows us to skip this period of trust-building. According to Microsoft, extended validation certificates will enable the developer to immediately establish a reputation with SmartScreen. Otherwise, the users will see a warning like "Windows Defender SmartScreen prevented an unrecognized app from starting. Running this app might put your PC at risk.", with the two buttons: "Run anyway" and "Don't run".

My experience is as follows. Since 2005, we have been using regular (non-EV) code signing certificates to sign .MSI, .EXE and .DLL files with timestamps, and there has never been a problem with SmartScreen until 2018, when there was just one case when it took 3 days for a beta version of our application to build trust since we have released it to beta testers. It was in the middle of the certificate validity period. I don't know what SmartScreen might not like in that specific version of our application, but there have been no SmartScreen complaints since then. Therefore, if your certificate is a non-EV, it is a signed application (such as an .MSI file) that will build trust over time, not a certificate. For example, a certificate can be issued a few months ago and used to sign many files, but for each signed file you publish, it may take a few days for SmartScreen to stop complaining about the file after publishing, as was in our case in 2018.

In conclusion, to avoid the warning altogether, i.e., prevent it from happening even suddenly, you need an Extended Validation (EV) code signing certificate.

This warning is shown if your app doesn't have enough reputation with Microsoft SmartScreen yet. In order to gain reputation, you can either

Read on for the details about these different options.

Option 1: Submit your app for malware analysis to Microsoft

Microsoft allows software developers to submit a file for malware analysis. According to Microsoft, this will help developers to "validate detection of their products". If the review was successful, the Microsoft SmartScreen warnings will go away faster, or sometimes even instantly (it worked instantly for one of my own apps). You need to have a Microsoft account to submit your app for review.

However, note that if you release an updated version of your app, then you'll also have to request a new review again. To overcome this problem, you'll either have to use an "Extended Validation" or a standard code signing certificate (see below).

Such an EV certificate will cost you somewhere between 250 and 700 USD per year, and will only be issued to registered businesses. If you're a single developer, you must be a sole proprietor and have an active business license. You can read more about the formal requirements for EV code signing certificates in the EV Code Signing Certificate Guidelines.

An EV certificate will typically be shipped to you by physical delivery on a hardware token.

Option 3: Buy a standard code signing certificate (and have some patience)

The cheaper "standard" (i.e. non-EV) code signing certificates can also be used to permanently (but not instantly!) get rid of the Microsoft SmartScreen warnings. Standard code signing certificates will cost you between 100 and 500 USD per year, and can also be issued to private developers without an active business license. Some CA's also offer discounts for open source projects.

How long will it take?

So, how long will it take until the Microsoft SmartScreen warning will disappear when using a standard code signing certificate? Unfortunately, this is difficult to answer, since Microsoft itself refuses to publish any details about this. And since there is a whole bunch of information that Microsoft SmartScreen might use to decide upon trustworthiness, your mileage may vary greatly. According to inofficial numbers reported by various sources (see below), it usually takes between 2 and 8 weeks until the warning will permanently go away. However, keep in mind that this will also depend on how many downloads and / or installs your app has.

The inofficial numbers are:

What you also need to know

As a final note, always make sure that you're timestamping your signed apps. Timestamping is extremely important, as it will allow the signed app to remain valid after the certificate itself has expired. Make sure to use an SHA-2 digest algorithm (e.g. SHA-256) for both the file and the timestamp signatures. Also see this question for further details.

Option 4: Don't do anything at all (and have a lot of patience)

If you don't take any measures at all, the Microsoft SmartScreen warning will also go away eventually. This might however take a ridiculous amount of time (months) and / or downloads (tens of thousands). Another big problem is that each time you'll release an updated version of your app, the waiting period will start all over again. So, this probably isn't the solution you're looking for.

UPDATE: Another writeup here: How to add publisher in Installshield 2018 (might be better).

I am not too well informed about this issue, but please see if this answer to another question tells you anything useful (and let us know so I can evolve a better answer here): How to pass the Windows Defender SmartScreen Protection? That question relates to BitRock - a non-MSI installer technology, but the overall issue seems to be the same.

Extract from one of the links pointed to in my answer above: "...a certificate just isn't enough anymore to gain trust... SmartScreen is reputation based, not unlike the way StackOverflow works... SmartScreen trusts installers that don't cause problems. Windows machines send telemetry back to Redmond about installed programs and how much trouble they cause. If you get enough thumbs-up then SmartScreen stops blocking your installer automatically. This takes time and lots of installs to get sufficient thumbs. There is no way to find out how far along you got."

Honestly this is all news to me at this point, so do get back to us with any information you dig up yourself.

The actual dialog text you have marked above definitely relates to the Zone.Identifier alternate data stream with a value of 3 that is added to any file that is downloaded from the Internet (see linked answer above for more details).

I was not able to mark this question as a duplicate of the previous one, since it doesn't have an accepted answer. Let's leave both question open for now? (one question is for MSI, one is for non-MSI).

Not the answer you're looking for? Browse other questions tagged windows installation windows-installer or ask your own question.

0
Browser blocks download due to harmfull for device
82
How to pass the smart screen on Win8 when install a signed application?
17
How can I stop my installer from triggering Windows 10's "This app has been blocked for your protection" error?
11
How long to get rid of smartscreen warning after signing code?
13
Whether/how to avoid SHA-1 signed timestamp when code signing?
9
How to pass the Windows Defender SmartScreen Protection?
2
How to add publisher in Installshield 2018
4
How to preserve reputation with the SmartScreen Filter in Windows 10 after previous code-signing certificate renewal?
2
Installshield Custom Dialogue Installer
1
How to add certified publisher in desktop application using advance installer
See more linked questions

597
How do I uninstall a Windows service if the files do not exist anymore?
874
How do I get the application exit code from a Windows command line?
572
How can I update the current line in a C# Windows Console App?
82
How to pass the smart screen on Win8 when install a signed application?
769
How to upgrade Git on Windows to the latest version
0
How to publish Windows Forms apps on the Internet for Windows 8?
1
How to get Windows' Smart Screen to trust my Installer?
0
How to avoid warning for signed electron app for Windows?
1
Microsoft Defender Smart Screen Preventing my MSI to run