How to write EF Core Query to filter on multiple tables?

Using ASP Core 2 with EF Core and SQL Server. I have, what I think is a straightforward task of retrieving a list of manufacturers (or individual manufacturer) for a given distributor. 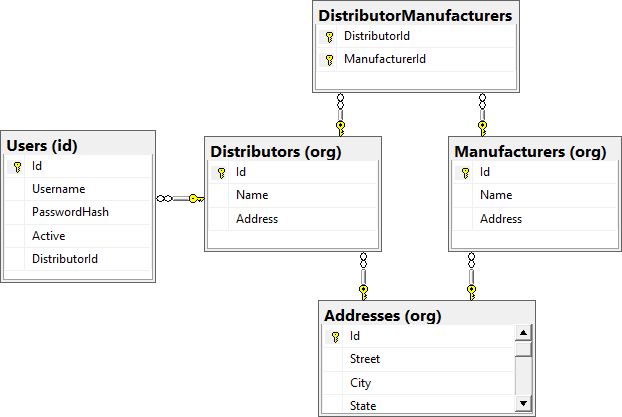 VS is complaining that ICollection<DistributorManufacturers> does not contain a definition for DistributorId (even though I copied/pasted it from the class). It is not conceptually different from my filter on Addresses.

I've also tried .ThenInclude to add the Distributors table but no luck.

The DistributorManufacturers table was created with Scaffold-DbContext and has the foreign keys and navigation properties defined.

So, did some work to re-create your models. The only thing I changed was I added the userId in the Distributor table instead of the opposite. This will be a long answer.. so hang on 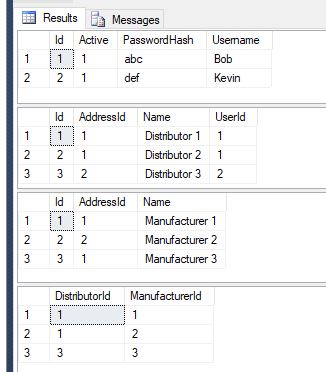 Then, in the GetManufacturers() action you wanted to return all Manufacturers for the logged in Distributor, AKA User. (This is my assumption from your question.. correct me if I'm wrong). So, down to the query:

To get the GetManufacturers(int id) working, just add the Manufacturer Id to the where clause. Since it's doing a inner join on DistributorManufacturer, if there's no relationship with the logged in user it will return null.

Note: In EF Core, when you have a many-to-many relationship, you need (for now at least..) to have the joint table as an entity. You can check the discussion about this here: https://github.com/aspnet/EntityFrameworkCore/issues/1368

Your query thus can be:

If you'd configured this many-to-many relationship according to the entity framework code first many-to-many conventions, you would have something like:

There is also a User: every User belongs to exactly one Distributor

The above is all that entity framework needs to know to understand that you want a many-to-many between Distributors and ManuFacturers. Entity Framework will created a proper junction table for you, although you won't need it in your queries as I'll show you below. If you don't like the default junction table that entity framework creates for you, you can use fluent API to define the table and column names:

Although internally entity framework will use the junction table, you won't use it in your queries, just use the ICollections:

Although the Include statement can be used, it is seldom wise to do so. One of the slower parts of database queries is the transfer of the selected data to your process, so you should limit the amount of transferred data to only the properties you really plan to use. Include will transfer all properties, and I highly doubt whether you'll use them, especially all the foreign keys with all the same values.

So your query using the ICollection:

It might be that you want some different properties, but you get the gist

From what I've read elsewhere, this is not do-able in the format that you are attempting. I still believe I've seen it done, but I didn't like what I saw and now don't recall the details.

My suggestion is that you turn your query around so that you are querying the Distributor (as specified by _user.DistributorId and then .Include() the Manufacturers.

However... I think you'll run into the same problem when querying the AddressesNavigation.State. As you say it is not conceptually different. You may only believe this is working due to seeing an error relating to the condition which comes later in your code - but that's no guarantee of the application of the conditions in the compiled query expression.