I have a prototype-scope bean, which I want to be injected by @Autowired annotation. In this bean, there is also @PostConstruct method which is not called by Spring and I don't understand why.

JUnit class where I want to inject bean:

The output from execution:

When I initialize bean by calling getBean from ApplicationContext everything works as expected. My question is why injecting bean by @Autowire and @Value combination is not calling @PostConstruct method

Why is @Value used instead of @Autowired?

The @Value annotation is used to inject values and normally has as destination strings, primitives, boxed types and java collections.

The @Value annotation can be placed on fields, methods and method/constructor parameters to specify a default value.

By the other hand, the AutowiredAnnotationBeanPostProcessor is a

BeanPostProcessor implementation that autowires annotated fields, setter methods and arbitrary config methods. Such members to be injected are detected through a Java 5 annotation: by default, Spring's @Autowired and @Value annotations.

This class handles the field injection, resolves the dependencies, and eventually calls the method doResolveDependency, is in this method where the 'priority' of the injection is resolved, springs checks if a sugested value is present which is normally an expression string, this sugested value is the content of the annotation Value, so in case is present a call to the class SimpleTypeConverter is made, otherwise spring looks for candicate beans and resolves the autowire.

Simply the reason @Autowired is ignored and @Value is used, is because the injection strategy of value is checked first. Obviously always has to be a priority, spring could also throw an exception when multiple conflicting annotations are used, but in this case is determined by that previous check to the sugested value.

Why does @Value creates a new intance of the object

Previously I said that the class SimpleTypeConverter was called when the suggested value was present, the specific call is to the method convertIfNecessary, this is the one that performs the conversion of the string into the destination object, again this can be done with property editor or a custom converter, but none of those are used here. A SpEL expression isn't used either, just a string literal.

Spring checks first if the destination object is a string, or a collection/array (can convert e.g. comma delimited list), then checks if the destination is an enum, if it is, it tries to convert the string, if is not, and is not an interface but a class, it checks the existance of a Constructor(String) to finally create the object (not managed by spring). Basically this converter tries many different ways to convert the string to the final object.

This instantiation will only work using a string as argument, if you use for instance, a SpEL expression to return a long @Value("#{2L}"), and use an object with a Constructor(Long) it will throw an IllegalStateException with a similar message:

Using a simple @Configuration class as a supplier.

You could define MyBean as a static class in MyBeanSupplier class if its the only method it would have. Also you cannot use the proxy mode ScopedProxyMode.TARGET_CLASS, because you'll need to provide the arguments as beans and the arguments passed to getMyBean would be ignored.

With this approach you wouldn't be able to autowire the bean itself, but instead, you would autowire the supplier and then call the get method.

You can also create the bean using the application context.

And the @PostConstruct method should be called no matter which one you use, but @PreDestroy is not called in prototype beans.

I read through the debug logs and stack trace for both scenarios many times and my observations are as follows:- 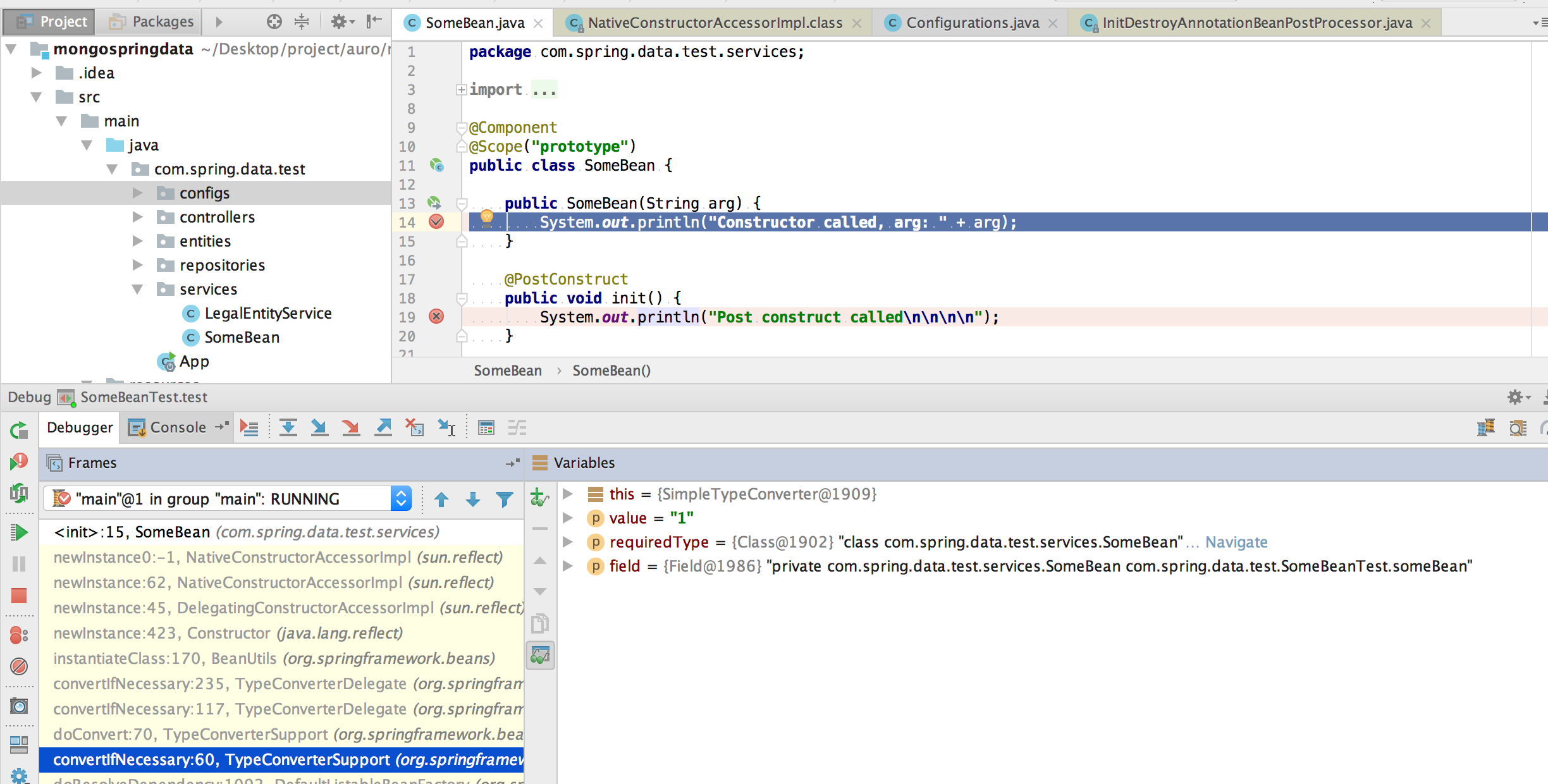 You should be having a bean with name arg injected with whatever value you want. E.g. I preferred using configuration class(you could create the bean in context file) and did below:-

Then test class would be as below (Note you could use change ContextConfiguration to use classpath to read context file ):-

So, a learning for me as well to be careful with the usage of @Value as it could be misleading that it helped in autowiring by injecting value from some spring bean that got created in the background and could make applications misbehave.

When you run the test, a new bean for the test is created (i.e. not the SomeBean class, the SomeBeanTest class). @Value will be instantiated as a member value (not a bean) and thus default BeanPostProcessor (AutowiredAnnotationBeanPostProcessor) will not attempt initializing it.

To show that I have moved your System.out.println() to log.info() (keep lines in sync). Enabling debug-level logging shows:

A way to workaround that works is to initialize the bean manually:

@Value does not do what you are expecting it to do. It cannot be used to supply a constructor arg to the bean being created.

See this SO Q&A: Spring Java Config: how do you create a prototype-scoped @Bean with runtime arguments?

If I am not wrong :- Spring RULE Field injection happens after objects are constructed since obviously the container cannot set a property of something which doesn't exist. The field will be always unset in the constructor.

You are trying to print the injected value (or do some real initialization :)), Using PostConstruct:- in your code you have two beans. 1 SomeBean after constructor called the filed value is set . 2 SomeBean2 you are passing arg as value 2 that have been set in second bean you can use a method annotated with @PostConstruct, which will be executed after the injection process.

Not the answer you're looking for? Browse other questions tagged java spring postconstruct prototype-scope or ask your own question.

162
Spring Java Config: how do you create a prototype-scoped @Bean with runtime arguments?
24
How to test constructor of a class that has a @PostConstruct method using Spring?
3
spring boot - @PostConstruct not called on @Component