Any locally-installed IDE is a huge improvement over Google's Script Editor, so the tool looks very promising. Unfortunately, the autocomplete feature for GAS services doesn't seem to be included in the package.

After going through the steps and installing all required dependencies, I'm still unable to get the autocomplete feature to work. When I execute the clasp pull command for the existing project, it converts the ".gs" extension to ".js". The autocomplete suggestions are simply the result of parsing existing code.

For example, if I call sheet.getRange() somewhere in my code, then the getRange() method will pop up in suggestions, but I can't list available options for, say, PropertiesService, unless it's already used in my code.

Has anybody had any luck with enabling autocomplete feature for Google Apps Script?

I found the solution that partially works, but it may not be applicable to other software. The steps below are for Visual Studio Code:

This answer is a minor variation on the accepted one for IDEs/extensions which support Typescript auto completion based on tsc/tsserver:

If you are using any JetBrains IDE: 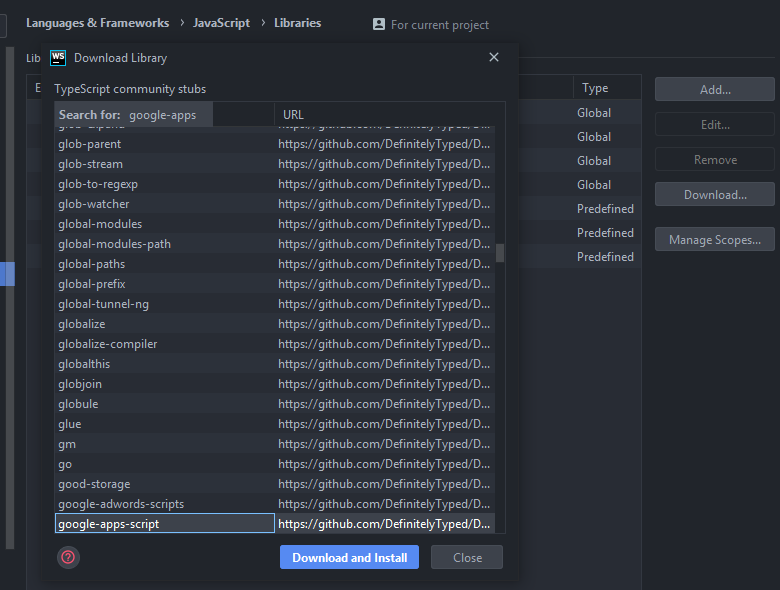 This should save some trouble deleting the file before each push every time.

This is an answer provided by Google developers in the "TU17: Enhancing the Google Apps Script Developer Experience with clasp and TypeScript" video.

Add a JavaScript file to your project like "appscript.js" and, in that file, add:

Save that file but make sure to ignore it when pushing files back to your project using a .claspignore file.

Not the answer you're looking for? Browse other questions tagged google-apps-script visual-studio-code autocomplete clasp or ask your own question.