Flutter apps are too big in size

I have good experience in android app development using java. Recently I came to know about flutter. So, I have tried to create a simple android app with flutter based on official tutorial. But surprisingly the debug app size is 25MB and release apk costs more than 7MB. It is really larger when compare with native developed android app.

Is there any way to optimize it?

One way that i use to reduce my app size is to use;

before i run the build command;

There's an explanation for this here, quoting the same -

In August 2018, we measured the size of a minimal Flutter app (no Material Components, just a single Center widget, built with flutter build apk), bundled and compressed as a release APK, to be approximately 4.7MB.

Of course, YMMV, and we recommend that you measure your own app, by running flutter build apk and looking at build/app/outputs/apk/release/app-release.apk.

Also, the relative differences in apk size would likely be smaller with larger apps. Flutter's overhead size is fixed.

Use following commands to analyze which is taking up most your app's space.

This includes native code, assets, and even a package-level breakdown of compiled Dart code.

If you want to see the visual representation of it, use DevTools. For that after running previous command, run:

You'll be then directed to your browser, where you will see something like this: 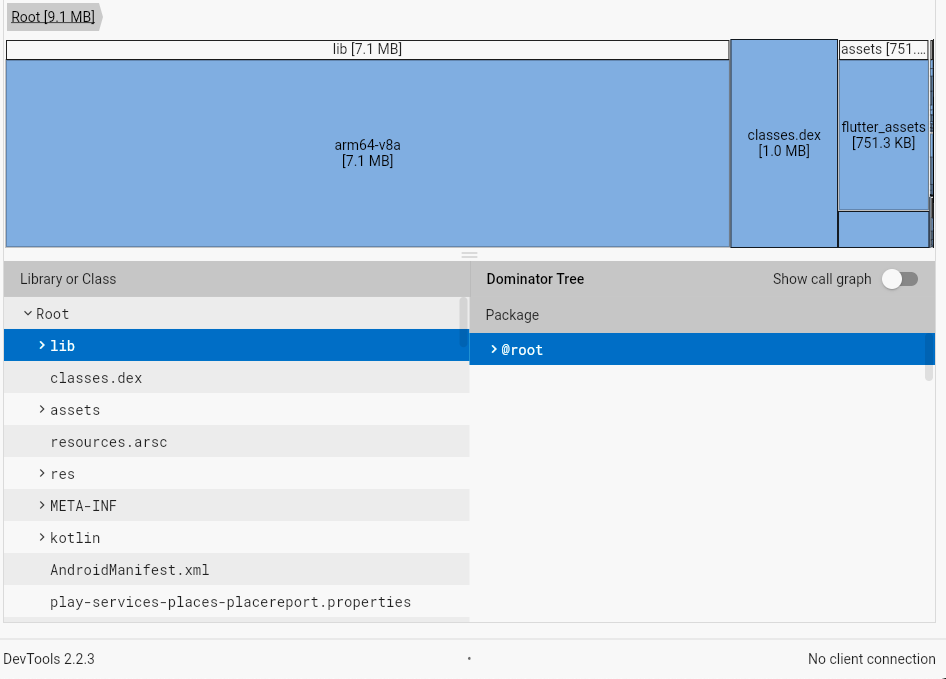 If you have too many fonts that will affect apk size heavily and flutter also made a solution for that by creating a package for you to get fonts from google fonts library(awesome package that give you access to so much fonts and flexibility to use anywhere). Get the package here and Read more here.

Please note these too:

If you build your apk using flutter build apk it will contains both arm-32 and arm-64 apks(Which flutter will show in console when you building apk). If you are building app bundle this is not an issue and its size is much smaller.

To avoid one flat apk containing arm-32 and arm-64, you can build them separately using below two commands:

Above will produce arm-32 bit apk. Go to project -> build -> app -> release and rename the apk to this: app-armeabi-v7a-release.apk.

then increment version code in pubspec.yaml, next flutter pub get and do this:

Then you can submit two apks separately(lower apk version first).

Removing the --split-per-abi flag results in a fat APK that contains your code compiled for all the target ABIs. Such APKs are larger in size than their split counterparts, causing the user to download native binaries that are not applicable to their device’s architecture

I also heard somewhere that in latest flutter update they have made flutter app size even smaller. There is a added issue for this also: https://github.com/flutter/flutter/issues/16833

Yes ofcourse, the size of the apk or ipa built with flutter will be minimum of ~7mb for a hello world app. This is because, flutter ships a core engine, framework, ICU data, LICENSE file etc with its build output which are mandatory for a flutter app to run.

You can check out the FAQ here to know more about what takes how much size when build.

I have used this command to generate Released apk for production stage:

the output apk is located in project folder:

in my case the size of apk is reduced to 5.3 MB (after above command execution). the reason for big size (almost > 50 MB) because they contain everything you might need during a hot restart or restart which prevents building whole system again when you made just a small change in your code .

Release builds are real result of all your code and they are real minified apps without any containers which then you can distribute on google store.

all this kind of cross-platform app are larger from start
i did work with react-native and hello-world app is about 6 MB
all you can do is make a two release apk ,one for arm cpu and one for x86 cpu in this way you can lower the size about 4 MB but never gonna be small as android

one way to reduce the size of your APK is to create multiple APKs that contain files for specific screen densities or ABIs.

UPDATE: if my it not fully supported now it ,will be in future for sure, in every phase of flutter development it will be this method work but not too much in beta release , but this method will work better by releasing more version of flutter

Before and After using ProGuard and more 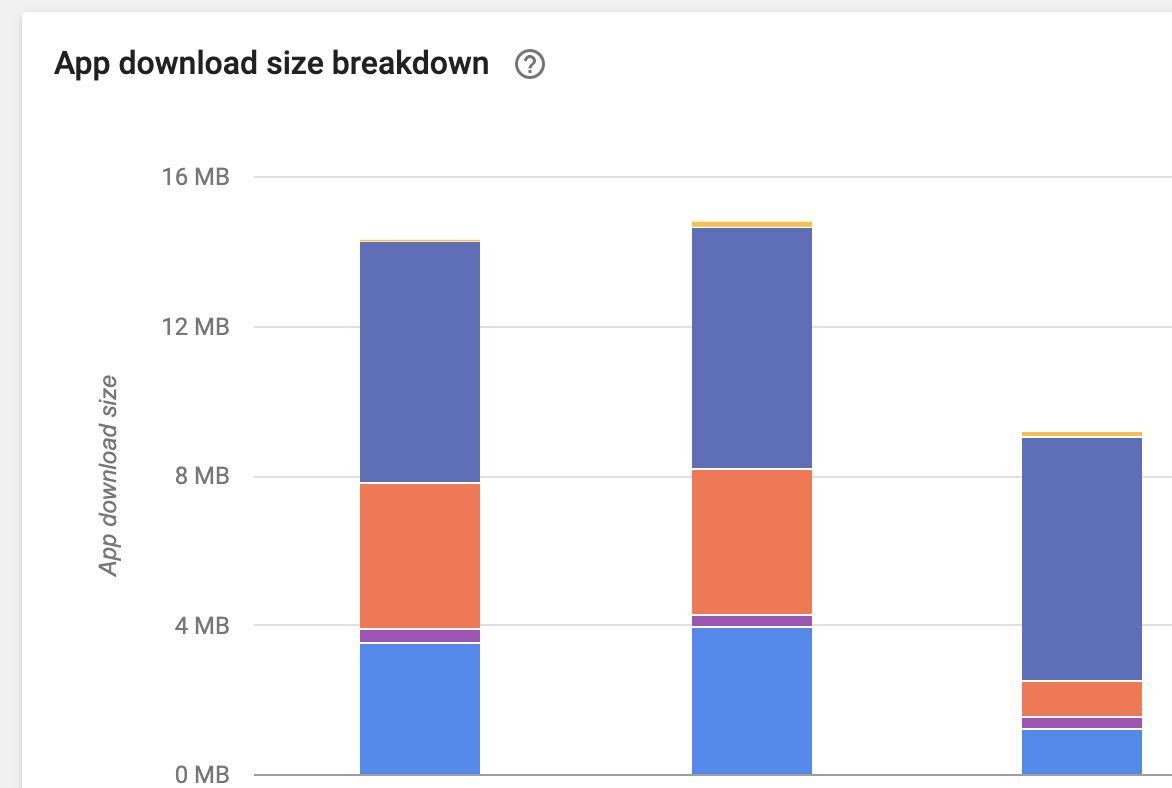 After running flutter build apk --release, my APK size was 16.2 MB. This APK is called FAT APK which is a single APK that contains binaries for multiple ABIs embedded within it and supports multiple architectures. With flutter build apk --split-per-abi, dart code obsfucates resulting in 3 APK files, size of my app.APK was reduced to 5.6 MB.

Here are the official docs explaining the same: https://docs.flutter.dev/deployment/android

Add Proguard file with the below code in it

Note: If the Proguard file does not exist then need to create at the location

I also came across in this very apk condition when debugging, while in releases around 7-8 mb. This however we could see it in much larger apps, where natively speaking, we need to import many libraries, while with Flutter the work is optimized. So if we assume an app that natively should weigh around 30mb with Flutter it should be similar. What can scare you is in the very basic apps. The important thing however is to optimize the images

You could use the apk analyzer in android studio to see what causes the app size to be that large.

For a debug apk below are steps for optimize -

There are many possibilities:

First , build your application in release mode by using :

In your terminal : flutter build --release

Some of the other things you can do to make your app smaller are:

Your can learn more about flutter app size here

A basic flutter "Hello World" app will be approximately 10mb in iOS and 4mb in Android. This cannot be smaller because of the runtime and LICENSE etc.

To make your app apk size small (for android):

You can obfuscate your code and remove the debug symbols from your binary.

Replace "apk" with "ipa" for iOS, and "appbundle" for Android before releasing the application.

This will prevent your code from reverse engineering as well as remove debug symbols which will help in reducing the app size.

I saw around 10% decrease in my app size after doing this but it will vary depending upon your application.

Check this below steps it may help you to reduce app size (only Android), i have reduced my 48mb build to 14mb

Some other optimizing tips,

Upload the images in permanent storage path like AWS or in your website server and use the link to that image in your code.

Its recommended to use from Material Icons or Cupertino Icons class. You can add --tree-shake-icons option to flutter build command, to remove all of the not used icons from the bundle. This will potentially save the size of your app. (use svg format icons)

If we are using more fonts from local assets similar like images these fonts will also increase app size. The best solution is to use google_fonts plugin. This pluign will dynamically download font when it is used.

We could build an app bundle if we are uploading to playstore or we could split the apk per abi which splits the apk to x64 and x86 bit code. By using appbundle Google Play’s new app serving model, called Dynamic Delivery, uses your app bundle to generate and serve optimized APKs for each user’s device configuration, so they download only the code and resources they need to run your app.

Refer below links for more understanding,

My apka build by flutter was of 47mb, Application app bundle -60mb.. After uploading bundle on play store size is11 to 20 mbenter image description here

Not the answer you're looking for? Browse other questions tagged java android dart flutter or ask your own question.

130
How to view the contents of an Android APK file?
24
How to minify a Flutter app with Proguard?
5
Why flutter apk file size is little bigger
3
Flutter APK greater than 100 MB
0
Flutter project size is really huge. How to reduce it?
2
What is ICU data in Flutter APK?
0
Firebase plugins cause fat APK size - Flutter
0
How to avoid packaging the resources of Web plugins into APK
1
Is Kotlin Plugin required for the Flutter app?
0
Flutter sample app size
See more linked questions

4145
What are the differences between a HashMap and a Hashtable in Java?
292
Dart SDK is not configured
3
How to optimize the Flutter App size?
1
APK Size V/S Installed APP size
3
Flutter APK greater than 100 MB
2
flutter vs android native in battery consumption & apk size?
57
Flutter: Execution failed for task ':app:compileDebugKotlin'
1
Reduce flutter apk size