I have created a database with a table using aws glue crawler. In athena, I cant choose that database/table for query. I think problem can be in service region location. My setup is next : 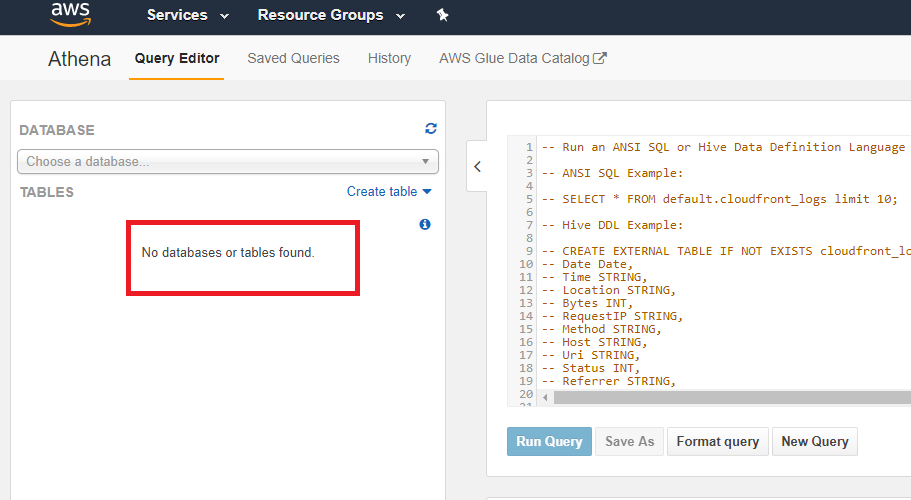 Did you check here: [https://docs.aws.amazon.com/athena/latest/ug/glue-upgrade.html?

Looks like you need to perform some AWS Glue upgrade, and also add policies so that Athena can pull catalog information. Also, FAQ is available here https://docs.aws.amazon.com/athena/latest/ug/glue-faq.html. I have not worked on this scenario yet, but working on Glue - Redshift.

In the FAQ, its mentioned as follows:

Why do I need to add AWS Glue policies to Athena users?
Before you upgrade, Athena manages the data catalog, so Athena actions must be allowed for your users to perform queries. After you upgrade to the AWS Glue Data Catalog, Athena actions no longer apply to accessing the AWS Glue Data Catalog, so AWS Glue actions must be allowed for your users. Remember, the managed policy for Athena has already been updated to allow the required AWS Glue actions, so no action is required if you use the managed policy.

What happens if I don’t allow AWS Glue policies for Athena users?

If you upgrade to the AWS Glue Data Catalog and don't update a user's customer-managed or inline IAM policies, Athena queries fail because the user won't be allowed to perform actions in AWS Glue. For the specific actions to allow, see Step 2 - Update Customer-Managed/Inline Policies Associated with Athena Users.

Not the answer you're looking for? Browse other questions tagged amazon-athena aws-glue or ask your own question.