Why does Chrome not need to repaint the entire layer on a change?

I am trying to understand, in practice, how the layout → paint → composite pipeline of Chrome works. During my testing, I got confused about Chrome's behavior in the following situation. (Codepen)

We have two squares, a red one and a blue one, inside a wrapper element. In Chrome's Layers panel this whole thing shows as one layer.

Question.
The second scenario does not make sense to me.

If the two squares and the wrapper element are all in the same layer, shouldn't changing one element affect the whole layer and cause the layer as a whole to repaint, instead of just the red square?

Additional questions.
Does Chrome, during the layout phase (or whatever phase it is that determines the layers) separate some elements into their own layers (due to position properties for example)? Is that why it is able to repaint them separately? Does it, after the compositing phase, dump them, so the developer only sees one layer in the dev tools?

Related background.
My rough understanding of the painting process of modern browsers is as follows:

So, the confusing bit here was the fact that the Paint flashing of the dev tools, only flashes the part of the layer that gets invalidated from the previous frame (so if one absolute positioned square starts getting smaller, the invalidated area between frames is an area with the dimensions and coordinates that the square had in the previous frame)

However, internally the whole layer gets repainted, no matter how big or small the invalidated parts are between frames.

So, for example, a blinking cursor will look small on Paint Flashing, but in reality the entire layer needs to be repainted.

Indeed, if we open up the Performance panel and enable the Advanced Painting Instrumentation option, we can see that between the square transitions the whole layer gets painted in both scenarios described in the question. 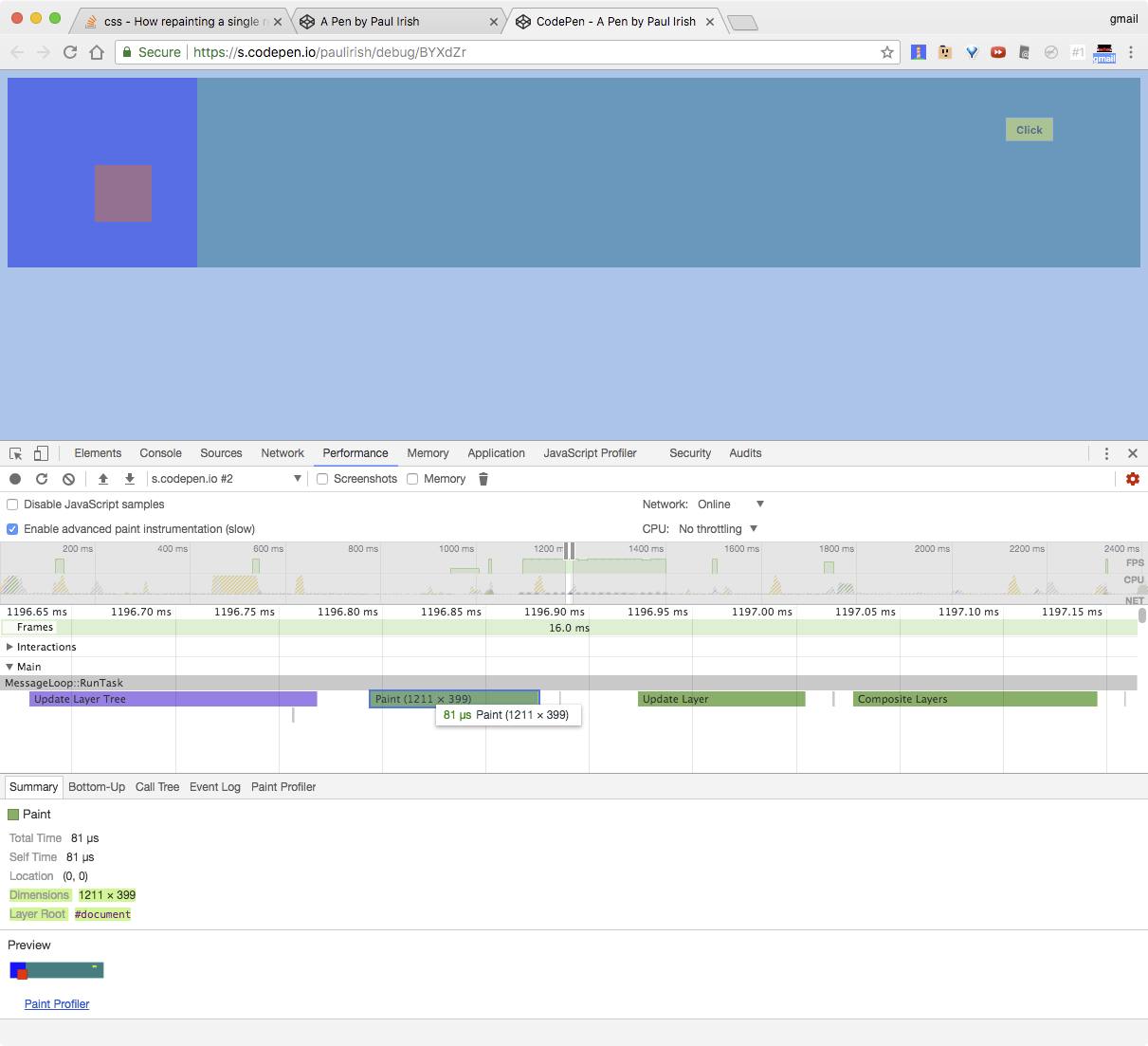 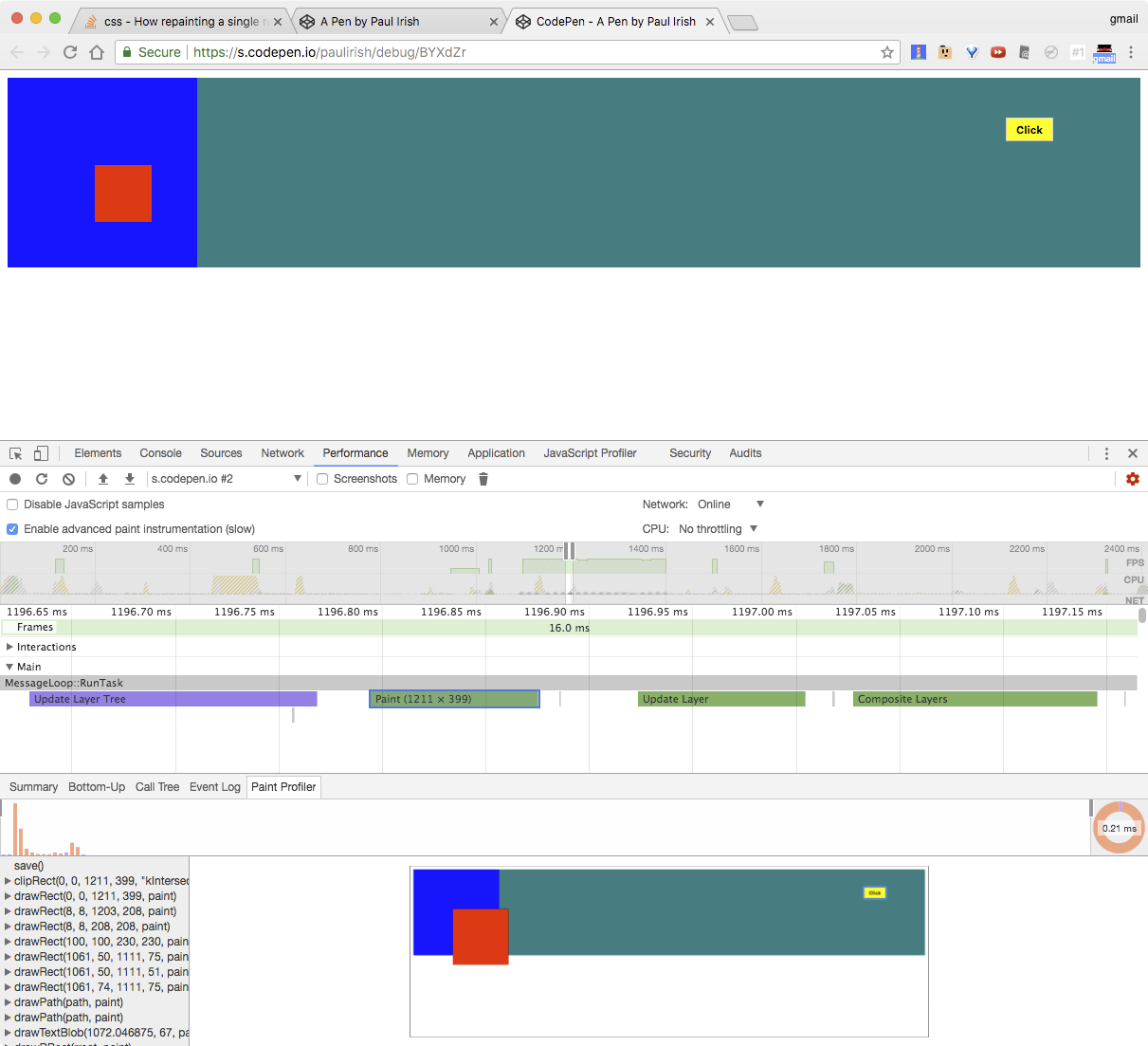 If we were to minimise the Layout and Painting steps to make as few operations as possible we should separate the red square and the yellow button to their own render layers.

This way interacting with the button and resizing the square will only affect their respective layers and will not cause a repaint to the background layer (which includes the background and the blue square).

Not the answer you're looking for? Browse other questions tagged css google-chrome browser google-chrome-devtools repaint or ask your own question.

2
Can I make a color background take up only a % of an element without making an image?
295
Chrome DevTools Devices does not detect device when plugged in
0
How to make a three-backgrounds centered page?
560
How to change the color of header bar and address bar in newest Chrome version on Lollipop?
0
50-50 split background with a centered layer covering on top
301
What does ==$0 (double equals dollar zero) mean in Chrome Developer Tools?
4
How to set background-color on 50% of area CSS
0
Rendering overlay to div with border radius and overflow: hidden (Chrome only)
0
Scrolling with multiple sticky elements within the same parent
1
How to vertically center text in DIV but float horizontally?