I have this error

I am try reinstall android studio and remove .gradle folder , any solution please?

The Android resource linking failed error can also appear if you have an error in any of your XML resources. In my case I was using the following line twice in one of my XML drawables in drawable folder:

I removed the duplicate line and the error disappeared. The error was a bit misleading:

According to the above error, the first thing you need to do is to proof read all the drawable resources that are accessed in the activity_main because the chances are higher that you will find the error. In the worst case scenario you might end up checking all your resource files.

Edited to answer "Where is this com.android.support:support-v4:+ setting ?" ...

The setting will probably(in this case) be in one of your plugin's .gradle file in the platform/android/ directory, for example in my case it was the starter-barcodescanner plugin so just go through all your plugins .gradle files : 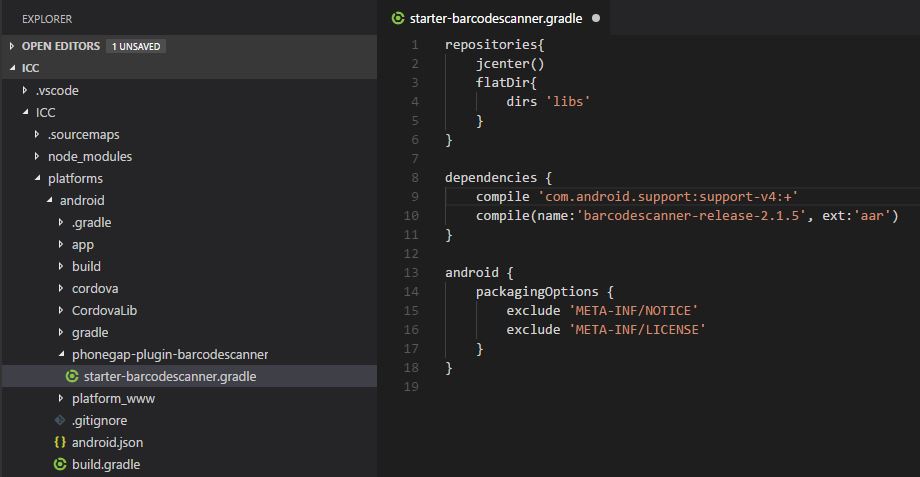 Note: Android Studio spits out a load of crazy errors like this if you upgrade the support libraries to 28.0.0 and your compileSdkVersion is not 28 also.

If you are using Windows 10, and Android Studio 3.2, you can simply go to the app's build.gradle, and change the version. 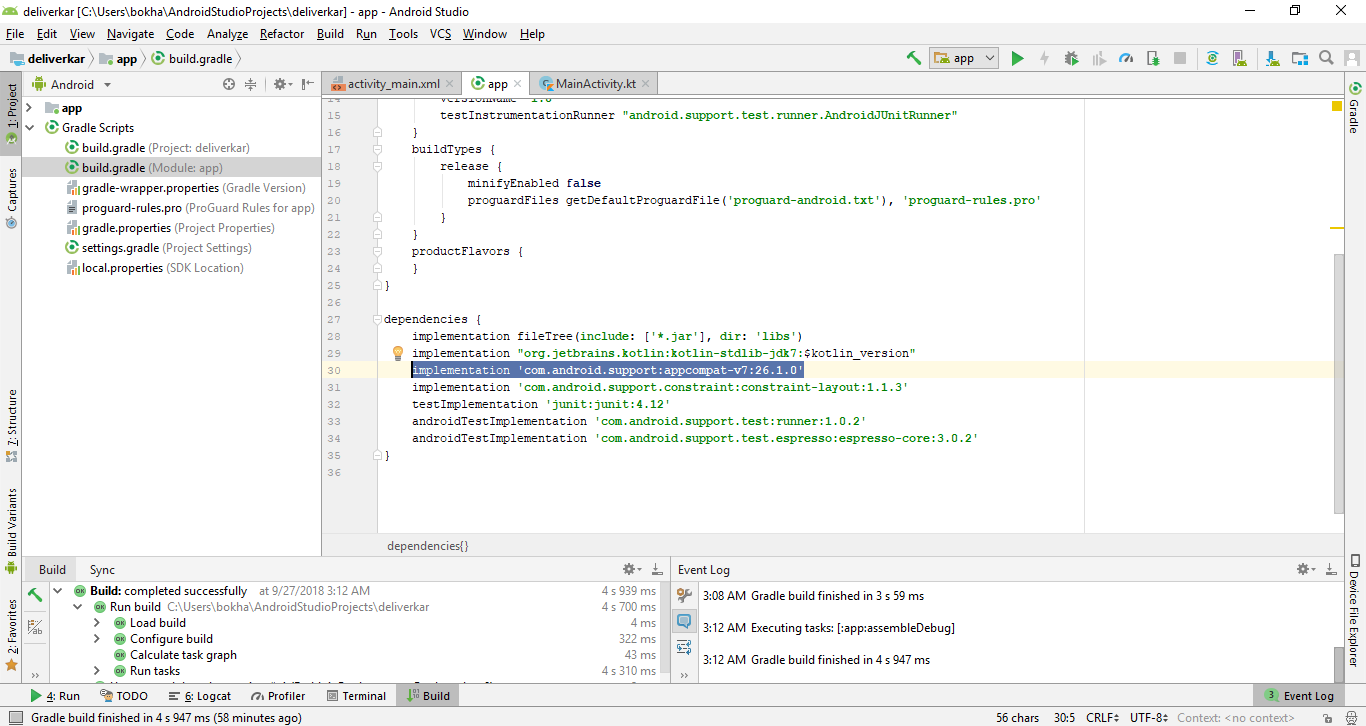 In your layout (xml) files almost every element has a property i.e. "id" which, can be assigned in order to refer to it from the java/kotlin code or from the xml itself.

Now sometimes or in some versions of Android Studio errors in xml files is either not reported or some random error is thrown while compiling, of which, this thread is an example i.e. when assigning an id to an element or when refering to another element in the layout we use the ID but ids are not just written like any other word rather they are prefixed by these characters: @+id/, otherwise the above error is thrown.

Hence the solution below should be considered:-

I resolved it by adding @+id/ before all my IDs.

feel so stupid - (for whatever reason) i had one empty xml in drawable folder. and AS produced dozens of unrelated errors ><

so, my general advice would be the same - check briefly every resource file.

For me, the error appeared after changing my launcher icon using Asset Studio in Android Studio. Turns out that the ic_launcher_foreground.xml file that was generated was missing the following line at the top of the XML file:

com.android.support:support-v4 just recently got update and maybe affect to plugin that use updated version in their dependencies. But if you cannot find in the dependencies (like if you use crosswalk plugin), just put this code in top of your code gradle plugin (no need to add on build.gradle).

Example location to put the code in crosswalk plugin here

Feel free to edit version of com.android.support (DO NOT USE THE 28.0.0) because thats the problem

I imported new colors to my project and got the same problem. So I opened styles.xml and re-assigned items to colors using new colors names.

I had the same problem and solved it by going to File -> Project Structure... -> Suggestions and then Apply all. Like suggested by @JeffinJ I think the problem was because of the Gradle plugin update.

There should be some error in resource files. It mean is there may be miss typed value of attributes. Go through the resource files and correct these value and enjoy the work.

There can be multiple reasons for this problem and these reasons are mainly in the resource or app level build.gradle file.

In my case, a view in the resource file didn't had the required dependency included in the build.gradle file.

So, make sure to include all the required dependencies in the build.gradle file.

Check your Gradle plugin version. Try downgrading it if you have updated to a newer version just before this issue showed up. Go to File -> Project Structure. Change to the previous version.

I was missing this line at the top of one of my XMLs:

Try update latest build version, target and compile version and also update dependencies but not works for me

In my case change <meta-items/> to <meta-data/> in manifest works for me...

Hope its helpful for someone...

I had the same problem, but it was because in my buttons layout_width/height I forgot to put dp at the end when editing them. Added dp and problem fixed :/

In my case I accidentally wrote:

Interestingly, Android Studio were able to navigate the string via CTRL+click. It was just giving Build Time error. Changing to standard "dot seperation" did the trick

i got the same bug, and i fixed it when i close the AndroidStudio and delete the dir like C:\Users\Jalal D\.gradle\caches\transforms-1\ in the build error info.

I was an issue like this with the drawable.

Spent almost 7 hours. tried everything from Google and SO. Nothing worked

then took rest reopned the file just watch the codes and suddenly it clicked to my mind that the image files I named as spalsh instead of splash!

Those 7 hours!!!! just only a small mistake and so much stress.

I was facing same issue and it is resolved by removing error from resource files like style, colors files in values folder. In my case, error in style colors as below:

Changing the version of the support library of the last one enabled (28.0.0) by the previous (27.1.0), the error Android Resource Linking Failed disappeared.

It should be noted that version 27.1.0 is the maximum allowed in our implementations, which works, but you could use an older one if you wish. And this has to be used in all dependencies that start with the string com.android.support:

Then, Sync Project with Gradle Files

Same issue occurred for me, but before getting this error, my app was running. So I just did undo 2/3 times. And did changes again. And build app.app ran successfully.

I've come across the same issue after adding the following dependency:

And the reason was that latest version of evernote uses dependencies to AndroidX, while I had support library version 27.1.1 in my project. So there was an option of upgrading support libraries to 28.0.0, as the other answers suggest, but that was a bit tricky for a large project with lots of custom views. So, I resolved the issue by downgrading evernote version to 1.3.1.

It may sound banal, but for me Build > Clean Project fixed this error without any other changes.

For me I was getting the "error android resource linking failed" pointing to a line in a layout file using ConstraintLayout that had been working correctly until today when the only change to my app level gradle file was to update the versions of:

The error message said something about not recognizing layout_constraintTop_toTopOf which of course is silly because it had been compiling quite happily for months.

I am already on 28.0.3 of build tools and compileSdkVersion of 28. I've been using androidx.appcompat everywhere for a while now (converted this project months back to androidx).

I first went through a project clean (no help), and invalidating cache/restart (no help). The layout in question had been originally defined using

<TextView>, <EditText> and <ImageView> components (which had been working fine until today).

But after reading the above answers I thought maybe somehow there was confusion being caused here so I changed the layout to use:

versions of all the various components. No change - still got the error.

I then deleted the <androidx.appcompat.widget.AppCompatTextView block that was causing the compilation error. I changed all references to it in the other widgets to refer to "parent" instead. Did a Make. This time the compile completed without error.

So something strange in that widget definition I thought....here is what it was:

I then pasted back the block I had Ctrl-V cut previously and changed the references back to that ID in the other components that reference it in the layout. Compile failed.

I cut the block again and pasted it to WordPad. Then reading from the WordPad paste, I actually typed it back in (i.e. I didn't copy/paste this time) - line by line, doing a make on the project after I typed in the minimal definition, and then again thereafter when I put in each new line. Each time the project compiled cleanly!

I don't know what to make of this. Perhaps some spurious invisible character was in the file originally?

Found one of the reasons which causes this problem

When we try to use any

in manifest file that is not present in values (string.xml,style.xml,color.xml,etc,) then this type of error occurs

In my case I styled by accident a property present only in buttons and added that style for a TextView.

Removing the row with android:borderlessButtonStyle fixed the problem.