Where does Java's String constant pool live, the heap or the stack?

I know the concept of a constants pool and the String constant pool used by JVMs to handle String literals. But I don't know which type of memory is used by the JVM to store String constant literals. The stack or the heap? Since its a literal which is not associated with any instance I would assume that it will be stored in stack. But if it's not referred by any instance the literal has to be collected by GC run (correct me if I am wrong), so how is that handled if it is stored in the stack?

As explained by this answer, the exact location of the string pool is not specified and can vary from one JVM implementation to another.

It is interesting to note that until Java 7, the pool was in the permgen space of the heap on hotspot JVM but it has been moved to the main part of the heap since Java 7:

Area: HotSpot
Synopsis: In JDK 7, interned strings are no longer allocated in the permanent generation of the Java heap, but are instead allocated in the main part of the Java heap (known as the young and old generations), along with the other objects created by the application. This change will result in more data residing in the main Java heap, and less data in the permanent generation, and thus may require heap sizes to be adjusted. Most applications will see only relatively small differences in heap usage due to this change, but larger applications that load many classes or make heavy use of the String.intern() method will see more significant differences. RFE: 6962931

And in Java 8 Hotspot, Permanent Generation has been completely removed.

String literals (or more accurately, the String objects that represent them) are were historically stored in a Heap called the "permgen" heap. (Permgen is short for permanent generation.)

CLARIFICATION #2 - In fact, Java 7 and later uses the regular heap to hold the string pool. Thus, String objects that represent String literals and intern'd strings are actually in the regular heap. (See @assylias's Answer for details.)

But I am still trying to find out thin line between storage of string literal and string created with new.

There is no "thin line". It is really very simple:

Then there is the separate question of where the string pool is "stored". Prior to Java 7 it was the permgen heap. From Java 7 onwards it is the main heap.

String pooling (sometimes also called as string canonicalisation) is a process of replacing several String objects with equal value but different identity with a single shared String object. You can achieve this goal by keeping your own Map (with possibly soft or weak references depending on your requirements) and using map values as canonicalised values. Or you can use String.intern() method which is provided to you by JDK.

At times of Java 6 using String.intern() was forbidden by many standards due to a high possibility to get an OutOfMemoryException if pooling went out of control. Oracle Java 7 implementation of string pooling was changed considerably. You can look for details in http://bugs.sun.com/view_bug.do?bug_id=6962931 and http://bugs.sun.com/view_bug.do?bug_id=6962930.

In those good old days all interned strings were stored in the PermGen – the fixed size part of heap mainly used for storing loaded classes and string pool. Besides explicitly interned strings, PermGen string pool also contained all literal strings earlier used in your program (the important word here is used – if a class or method was never loaded/called, any constants defined in it will not be loaded).

The biggest issue with such string pool in Java 6 was its location – the PermGen. PermGen has a fixed size and can not be expanded at runtime. You can set it using -XX:MaxPermSize=96m option. As far as I know, the default PermGen size varies between 32M and 96M depending on the platform. You can increase its size, but its size will still be fixed. Such limitation required very careful usage of String.intern – you’d better not intern any uncontrolled user input using this method. That’s why string pooling at times of Java 6 was mostly implemented in the manually managed maps.

Oracle engineers made an extremely important change to the string pooling logic in Java 7 – the string pool was relocated to the heap. It means that you are no longer limited by a separate fixed size memory area. All strings are now located in the heap, as most of other ordinary objects, which allows you to manage only the heap size while tuning your application. Technically, this alone could be a sufficient reason to reconsider using String.intern() in your Java 7 programs. But there are other reasons.

Being eligible for garbage collection and residing in the heap, a JVM string pool seems to be a right place for all your strings, isn’t it? In theory it is true – non-used strings will be garbage collected from the pool, used strings will allow you to save memory in case then you get an equal string from the input. Seems to be a perfect memory saving strategy? Nearly so. You must know how the string pool is implemented before making any decisions.

1. Stack: One stack is created per thread and it stores stack frames which again stores local variables and if a variable is a reference type then that variable refers to a memory location in heap for the actual object.

2. Heap: All kinds of objects will be created in heap only.

2. Old Generation: Store objects which have survived many garbage collection cycles and still being referenced.

We can see the runtime constant pool for our code in the bytecode by using javap -verbose class_name which will show us method references (#Methodref), Class objects ( #Class ), string literals ( #String ) 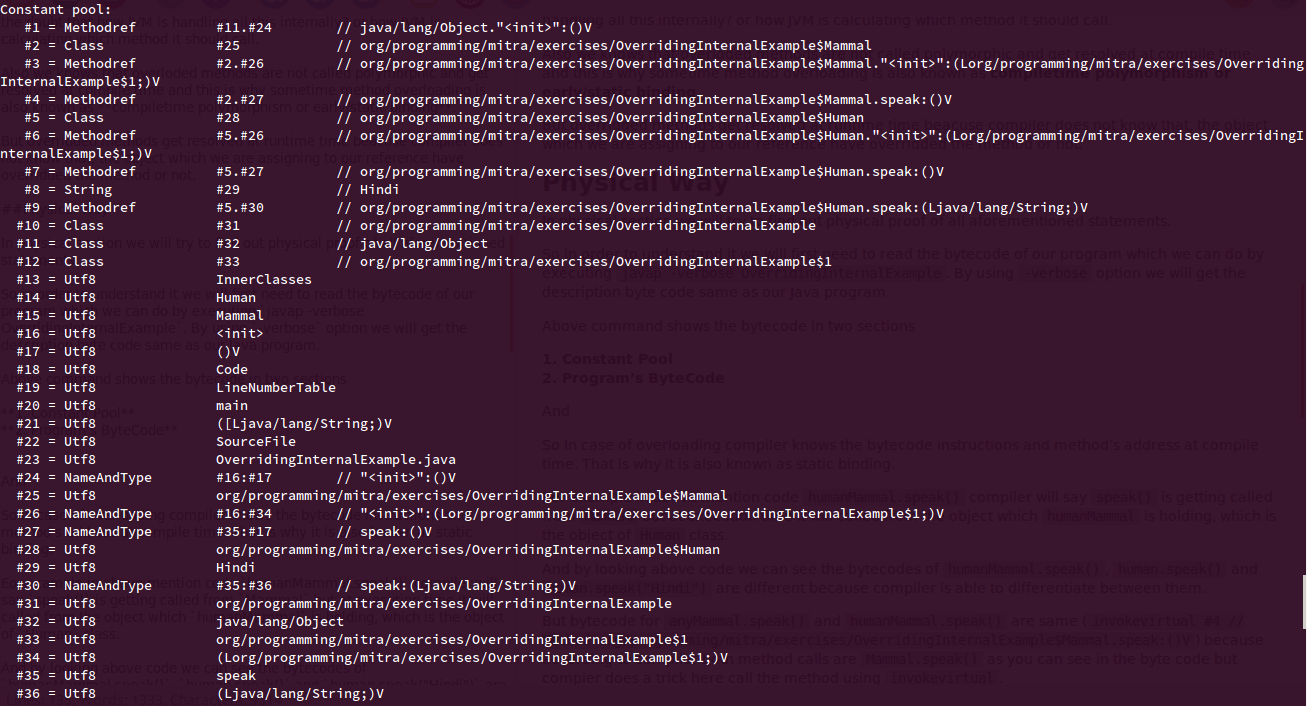 You can read more about it on my article How Does JVM Handle Method Overloading and Overriding Internally.

To the great answers that already included here I want to add something that missing in my perspective - an illustration.

As you already JVM divides the allocated memory to a Java program into two parts. one is stack and another one is heap. Stack is used for execution purpose and heap is used for storage purpose. In that heap memory, JVM allocates some memory specially meant for string literals. This part of the heap memory is called string constants pool.

So for example, if you init the following objects:

String literals s1 and s2 will go to string constant pool, objects obj1, obj2, obj3 to the heap. All of them, will be referenced from the Stack.

Also, please note that "abc" will appear in heap and in string constant pool. Why is String s1 = "abc" and String obj1 = new String("abc") will be created this way? It's because String obj1 = new String("abc") explicitly creates a new and referentially distinct instance of a String object and String s1 = "abc" may reuse an instance from the string constant pool if one is available. For a more elaborate explanation: https://stackoverflow.com/a/3298542/2811258 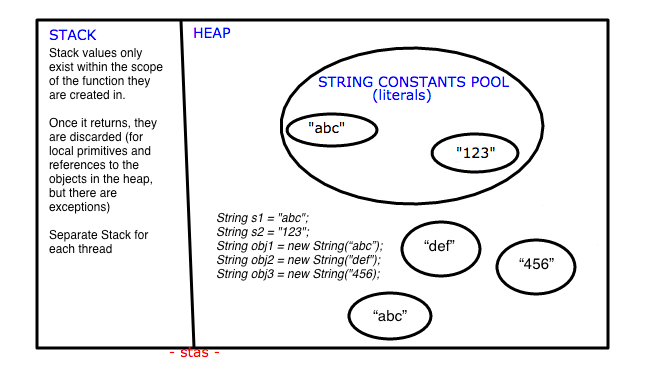 Not the answer you're looking for? Browse other questions tagged java string jvm or ask your own question.

0
java - Do strings inside methods get loaded immediately at class load time?
0
java string literal and new operator
245
Difference between string object and string literal
73
Is String Literal Pool a collection of references to the String Object, Or a collection of Objects
20
Java stack and heap memory management
9
Difference between a string and an array of characters
7
String pool is created in PermGen area or Object area of Heap
4
String Constant Pool memory sector and garbage collection
0
Garbage collection of previously assigned object
2
Which String Object is accessed?
See more linked questions

834
Efficiency of Java “Double Brace Initialization”?
1536
How can I convert a stack trace to a string?
3598
Does Python have a string 'contains' substring method?
266
Why is there no String.Empty in Java?
207
What happens when there's insufficient memory to throw an OutOfMemoryError?
10
What if Size of String Pool Exceeds?
73
Is String Literal Pool a collection of references to the String Object, Or a collection of Objects
28
String Constant Pool
1791
Why does this code using random strings print “hello world”?
0
What is the difference between Heap memory and string constant pool in java