Why is it not a commit and a branch cannot be created from it?

I need to work with an intricate configuration of repositories. I have 5 of them:

So, my understanding that it works this way:

Now I did some changes on the machine 3 and I want to push these changes to machine 4. Here are the instructions that I need to follow:

I have problems with step 4. I get the following error:

For those who found this searching for an answer to fatal: 'origin/remote-branch-name' is not a commit and a branch 'local-branch-name' cannot be created from it, you may also want to try this first:

If you run git checkout -b local-branch-name origin/remote-branch-name without fetching first, you can run into that error.

The reason it says "is not a commit" rather than something clearer like "branch doesn't exist" is because git takes the argument where you specified origin/remote-branch-name and tries to resolve it to a commit hash. You can use tag names and commit hashes as an argument here, too. If they fail, it generates the same error. If git can't resolve the branch you provide to a specific commit, it's usually because it doesn't have the freshest list of remote branches. git fetch --all fixes that scenario.

The --all flag is included in case you have multiple remotes (e.g. origin, buildserver, joespc, etc.), because git fetch by itself defaults to your first remote-- usually origin. You can also run fetch against a specific remote; e.g., git fetch buildserver will only fetch all the branches from the buildserver remote.

To list all your remotes, run the command git remote -v. You can omit the --all flag from git fetch if you only see one remote name (e.g. origin) in the results.

We had this error:

because we did a minimalistic clone using:

For us the minimalistic fix was:

I managed to fix this with this settings, just update the config with this command

and add this config.

and then you can git fetch --all

I found this question troubleshooting simpler problem: I recieved same error trying to create a lobal branch from remote. I resolved it by creating branch from commit hash:

The question is complex / convolute, the answer is simple. There was a mismatch between the alias and machine3. The alias for the remote that has been used, was not for machine3. The machine3 had another alias.

For me, I should have checked out to test-branch first, then it worked fine and created a new branch from test-branch.

We were having this exact error in a Windows machine running gitbash on a folder synced with google drive.

It was caused by having the feature "Enable experimental built-in file system monitor" enabled.

After uninstalling and reinstalling gitbash with this feature disabled it was fixed.

The solution from J.D. Mallen involves git fetch --all

Changing autofetch to a string config which has "current", "all" and "off".

This allows users to fetch from all remotes instead of just their origin.
For developers working on a Fork, this should make extensions work more intuitively.

So if you set the VSCode setting git.autofetch to "all", you won't even have to type git fetch --all.

I used git workflow in visual studio code as shown in the below diagram to solve mine: 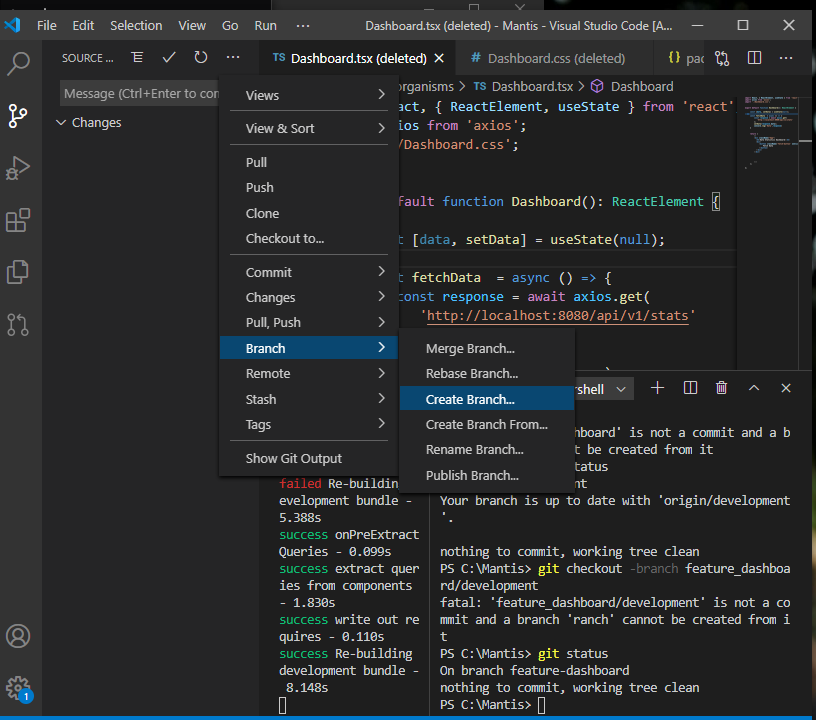 Not the answer you're looking for? Browse other questions tagged git git-non-bare-repository or ask your own question.

24428
How do I undo the most recent local commits in Git?
3900
Delete commits from a branch in Git
3553
How do you create a remote Git branch?
5987
Move the most recent commit(s) to a new branch with Git
19267
How do I delete a Git branch locally and remotely?
5385
How to change the URI (URL) for a remote Git repository?
2009
Throw away local commits in Git
1627
How do I properly force a Git push?
1699
How can I reconcile detached HEAD with master/origin?
1808
Remove tracking branches no longer on remote