Neo4J - Database failed to create: Error: Could not change password

I am trying to create a database for my Neo4J Desktop, but everytime I attempt to do so, I get the following: Database failed to create: Error: Could not change password

How can I fix this and successfully create the Database?

I was in the same situation apparently. First check that your problem was the same as mine!

1 - Within the application Neo4J Desktop access the menu: Developer\Developer Tools

2 - Select the Console tab
3 - Try again to create the Database
4 - Check if the error message appears:
Neo4jAdmin: Error: missing "server" JVM at "C:\Program Files (x86)\Java\jre1.8.0_201\bin\server\jvm.dll". Please install or use the JRE or JDK that contains these missing components. 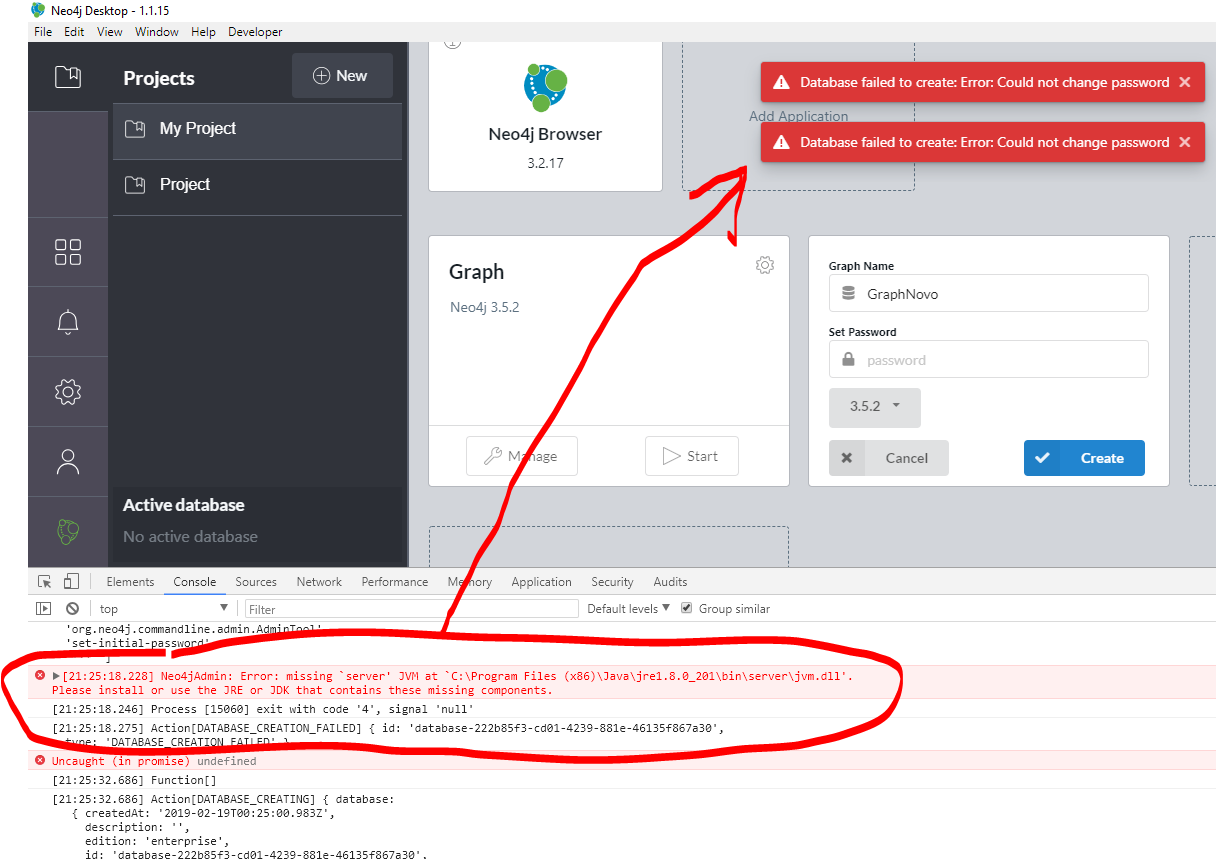 If this is happening with you, do the following:

1 - Go to the directory where the jre is installed, in my case it was in:
C:\Program Files (x86)\Java\jre1.8.0_201\bin
2 - Within this directory create a folder called server
3 - Still in the bin directory, go to the client directory
4 - Copy all content from the client folder into the sever folder
5 - Restart Neo4J Desktop as administrator
6 - Try again to create the database

I had a similar problem; here is what I did to solve it:

PS: %NEO4J_HOME% is the path to your Neo4J installation folder

I'm having exactly the same problem.

To be clear, this is occurring (for me) on the Windows platform. It would be helpful if other commenters could clarify which platform they are using.

Since my original reply I have tried-

Neither of these has helped.

Looking at the Neo4J log file, I think this shows where the problem is-

There is a neo4j-admin.bat file at the path specified, but it looks as if Neo4J isn't finding it.

The error message shows the path to the .bat file truncated at the "personal folder" point. In our corporate PC config we have a domain name appended to our personal file paths, so my personal folder looks like <myname>.<domainname> .

The error has converted this path to the old DOS "8.3" format in the form "MYNAM~1.COR" and then choked.

I'm guessing at this point, but I would say Neo4J has not been tested on a Windows environment with "complex" names in the users file paths. Somewhere they are falling foul of Windows still-present "file name mangling" feature that munges long filenames down to 8.3 format.

UPDATE: Out of interest I tried manually running the neo4j-admin.bat script (in a cmd window) that the error points to, results were-

I think this indicates that the script is trying to run, but needs a bunch of environment set up, that would normally be handled by Neo4J itself.

I feel more confident in saying this is an issue, at least for the Windows install, caused by Neo4J's configuration tools and scripts not handling Windows pathnames correctly.

The developers are saying it has been fixed, The fix will be included in a future release. Full text of the response-

For me the cause for this error was a { in my password.

I had the same alert: "Database failed to create: Error: Could not change password."

I read through the logs at .Neo4jDesktop/log.log and found this line:

Unexpected token '}' in expression or statement.

Once I removed that character from my password I was able to create a database.

I had same issue with version Neo4J 1.0.21 and it got resolves

Let me know if that don't work for you..

I had the same issue. After several trials, I deleted the folder assigned as "Data Path". And then start Neo4j Desktop. It works now. Hope this helps.

make sure you have a jdk installed! that's what fixed this issue for me.

I had same issue on mac.

At last fixed it by remove the whole config dictionary: ~/Library/Application Support/Neo4j Desktop