Are static variables shared between threads?

My teacher in an upper level Java class on threading said something that I wasn't sure of.

He stated that the following code would not necessarily update the ready variable. According to him, the two threads don't necessarily share the static variable, specifically in the case when each thread (main thread versus ReaderThread) is running on its own processor and therefore doesn't share the same registers/cache/etc and one CPU won't update the other.

Essentially, he said it is possible that ready is updated in the main thread, but NOT in the ReaderThread, so that ReaderThread will loop infinitely.

He also claimed it was possible for the program to print 0 or 42. I understand how 42 could be printed, but not 0. He mentioned this would be the case when the number variable is set to the default value.

I thought perhaps it is not guaranteed that the static variable is updated between the threads, but this strikes me as very odd for Java. Does making ready volatile correct this problem?

He showed this code:

There isn't anything special about static variables when it comes to visibility. If they are accessible any thread can get at them, so you're more likely to see concurrency problems because they're more exposed.

There is a visibility issue imposed by the JVM's memory model. Here's an article talking about the memory model and how writes become visible to threads. You can't count on changes one thread makes becoming visible to other threads in a timely manner (actually the JVM has no obligation to make those changes visible to you at all, in any time frame), unless you establish a happens-before relationship.

Here's a quote from that link (supplied in the comment by Jed Wesley-Smith):

Chapter 17 of the Java Language Specification defines the happens-before relation on memory operations such as reads and writes of shared variables. The results of a write by one thread are guaranteed to be visible to a read by another thread only if the write operation happens-before the read operation. The synchronized and volatile constructs, as well as the Thread.start() and Thread.join() methods, can form happens-before relationships. In particular:

He was talking about visibility and not to be taken too literally.

Static variables are indeed shared between threads, but the changes made in one thread may not be visible to another thread immediately, making it seem like there are two copies of the variable.

This article presents a view that is consistent with how he presented the info:

First, you have to understand a little something about the Java memory model. I've struggled a bit over the years to explain it briefly and well. As of today, the best way I can think of to describe it is if you imagine it this way: 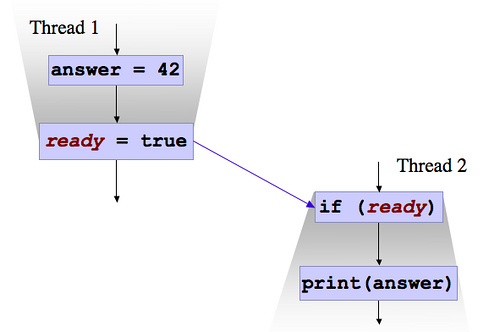 But again, this is simply a mental model to think about threading and volatile, not literally how the JVM works.

Basically it's true, but actually the problem is more complex. Visibility of shared data can be affected not only by CPU caches, but also by out-of-order execution of instructions.

Therefore Java defines a Memory Model, that states under which circumstances threads can see consistent state of the shared data.

They are "shared" of course in the sense that they both refer to the same variable, but they don't necessarily see each other's updates. This is true for any variable, not just static.

And in theory, writes made by another thread can appear to be in a different order, unless the variables are declared volatile or the writes are explicitly synchronized.

Within a single classloader, static fields are always shared. To explicitly scope data to threads, you'd want to use a facility like ThreadLocal.

when you define the variable like this the default value of i = 0; thats why there is a possibility to get you 0. then the main thread updates the value of boolean ready to true. since ready is a static variable , main thread and the other thread reference to the same memory address so the ready variable change. so the secondary thread get out from while loop and print value. when printing the value initialized value of number is 0. if the thread process has passed while loop before main thread update number variable. then there is a possibility to print 0

@dontocsata you can go back to your teacher and school him a little :)

few notes from the real world and regardless what you see or be told. Please NOTE, the words below are regarding this particular case in the exact order shown.

The following 2 variable will reside on the same cache line under virtually any know architecture.

Thread.exit (main thread) is guaranteed to exit and exit is guaranteed to cause a memory fence, due to the thread group thread removal (and many other issues). (it's a synchronized call, and I see no single way to be implemented w/o the sync part since the ThreadGroup must terminate as well if no daemon threads are left, etc).

The started thread ReaderThread is going to keep the process alive since it is not a daemon one! Thus ready and number will be flushed together (or the number before if a context switch occurs) and there is no real reason for reordering in this case at least I can't even think of one. You will need something truly weird to see anything but 42. Again I do presume both static variables will be in the same cache line. I just can't imagine a cache line 4 bytes long OR a JVM that will not assign them in a continuous area (cache line).

Not the answer you're looking for? Browse other questions tagged java multithreading concurrency static memory-visibility or ask your own question.

2
Is a static variable shared between two threads?
-4
run 5 thread in parallel
0
Are while true loops that check only for one condition thread safe?
0
Java variable shared between two process
51
Happens-before relationships with volatile fields and synchronized blocks in Java - and their impact on non-volatile variables?
20
Using Guava for high performance thread-safe caching
4
Thread never stops in Java
5
Program not terminating after loop completion
3
Why is this code working without volatile?
3
Should I use static variables for my main program variables?
See more linked questions