Installing Graphviz for use with Python 3 on Windows 10

So I've had Python 3.6 on my Windows 10 computer for a while now, and today I just downloaded and installed the graphviz 0.8.2 (https://pypi.python.org/pypi/graphviz) package via the admin commandline with:

It was only after this point that I downloaded the Graphviz 2.38 MSI installer file and installed the program at:

So then I tried to run this simple Python program:

But unfortunately, I received the following error when I try to run my Python program from commandline:

Notice how what I've asked seems VERY similar to this question asked here: "RuntimeError: Make sure the Graphviz executables are on your system's path" after installing Graphviz 2.38

But for some reason, adding those paths (suggested in the solutions at the link above) to the system variables isn't working, and I don't know why! I tried restarting the computer after adding the paths as well, still to no success. See the image below: 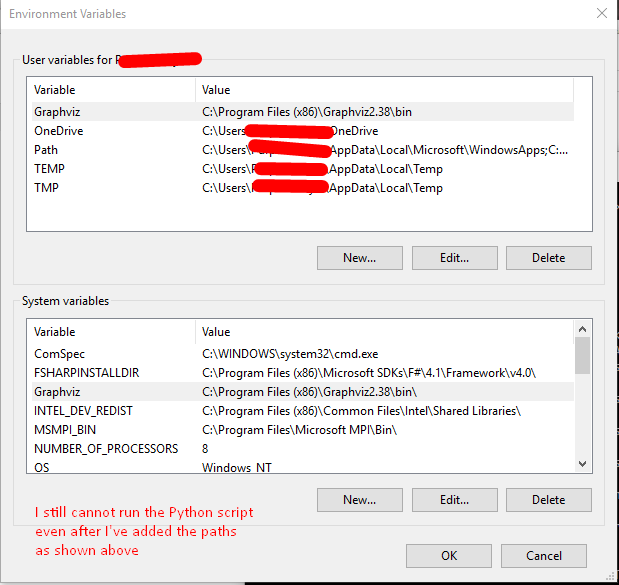 Although the other suggested solution, which was to add these few lines in front of my Python code, did work:

But here's the issue: I don't understand why adding to the environment variables didn't work, and this is my primary concern. So my question is this: why did adding those lines of code in front of the Python script work but changing the environment variables didn't? What do I need to do to get my script to run without adding those lines of code in front?

Can you please post the output you get when you type SET in a cmd window after setting the PATH environment variable?

A cmd window must be restarted before updated environment variables become effective!

684
Adding a directory to the PATH environment variable in Windows
250
"RuntimeError: Make sure the Graphviz executables are on your system's path" after installing Graphviz 2.38

1717
Replacements for switch statement in Python?
1576
Use different Python version with virtualenv
2625
How to upgrade all Python packages with pip?
1470
How can I use threading in Python?
1827
Installing specific package version with pip
1165
How do I install a Python package with a .whl file?
2
Python 3 subprocess module throws error running "dir" on Windows
7
How to Render Graph in Python using graphviz and anytree packages