What I'm trying to achieve should be rather straightforward although Powershell is trying to make it hard.

I want to display the full path of files, some with Arabic, Chinese, Japanese and Russian characters in their names

I always get some undecipherable output, such as the one shown below 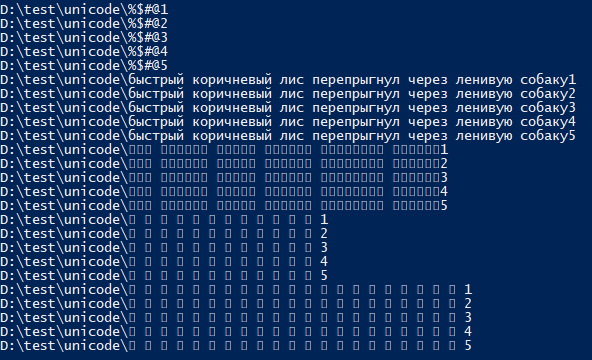 The output seen in console is being consumed as is by another script. The output contains ? instead of the actual characters.

The command executed is

Is there any easy way to launch powershell (via command line or in any fashion that can be written into a script) such that the output is seen correctly.

P.S. I've gone through many similar questions on Stack Overflow but none of them have much input other than calling it a Windows Console Subsystem issue.

The PowerShell Core (v6+) perspective (see next section for Windows PowerShell), irrespective of character rendering issues (also covered in the next section), with respect to communicating with external programs:

The following magic incantation in Windows PowerShell does this (as stated, this implicitly performs chcp 65001):

To persist these settings, i.e., to make your future interactive PowerShell sessions UTF-8-aware by default, add the command above to your $PROFILE file.

Note: Recent versions of Windows 10 now allow setting the system locale to code page 65001 (UTF-8) (the feature is still in beta as of Window 10 version 1903), which makes all console windows default to UTF-8, including Windows PowerShell's.
If you do use that feature, setting [console]::InputEncoding / [console]::OutputEncoding is then no longer strictly necessary, but you'll still have to set $OutputEncoding (which is not necessary in PowerShell Core, where $OutputEncoding already defaults to UTF-8).

Tip of the hat to eryksun for all his input.

[1] Note that running chcp 65001 from inside a PowerShell session is not effective, because .NET caches the console's output encoding on startup and is unaware of later changes made with chcp (only changes made directly via [console]::OutputEncoding] are picked up).

[2] I am unclear on how that manifests in practice; do tell us, if you know.

Elaborated Alexander Martin's answer. For testing purposes, I have created some folders and files with valid names from different Unicode subranges as follows: 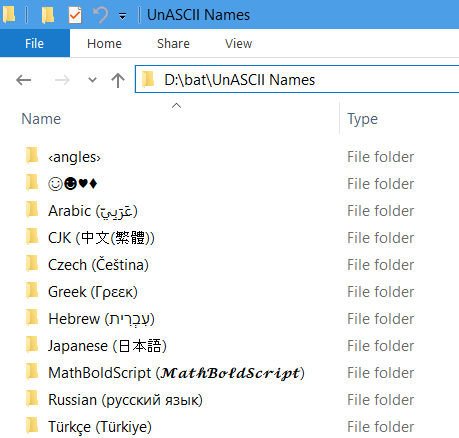 For instance, with Courier New console font, replacement symbols are displayed instead of CJK characters in a PowerShell console: 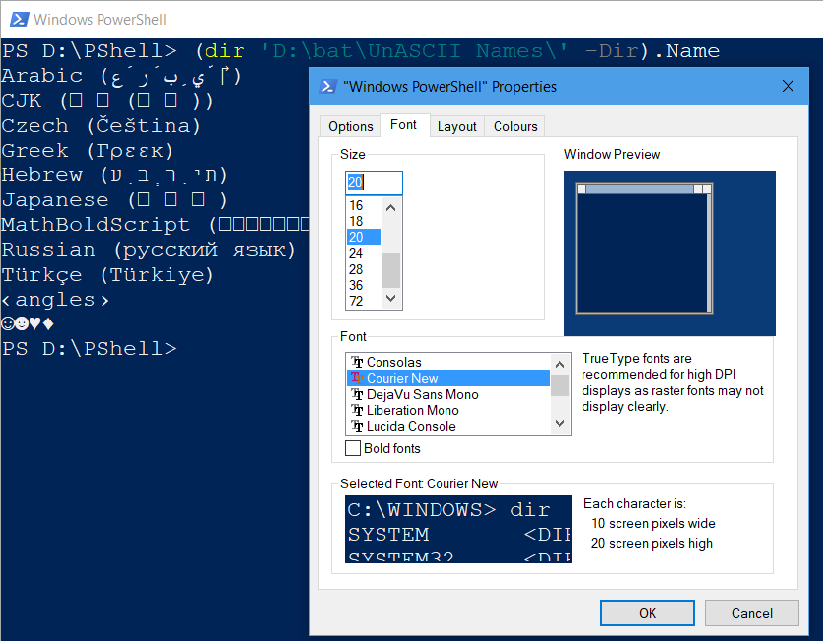 On the other hand, with SimSun console font, (poorly visible) replacement symbols are displayed instead of Arabic and Hebrew characters while CJK chars seem to be displayed correct: 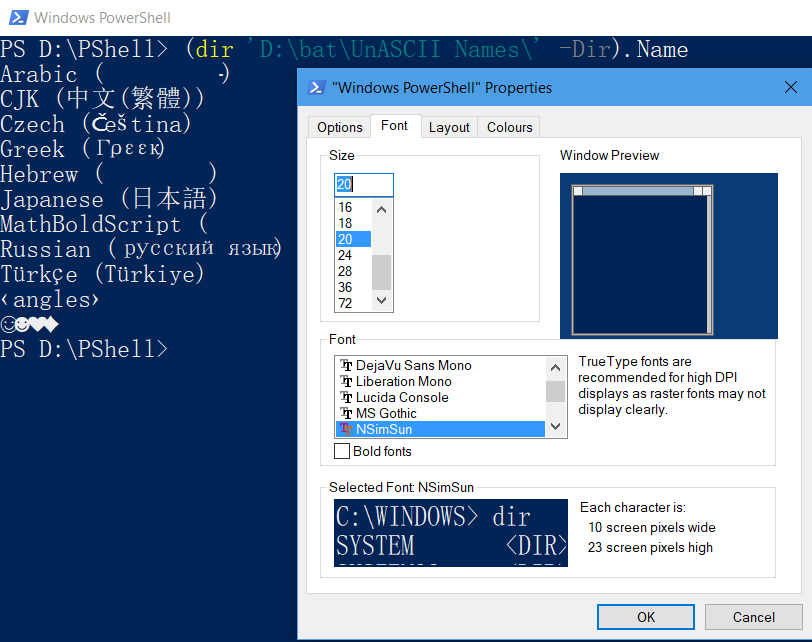 Please note that all replacement symbols are merely displayed whereas real characters are preserved as you can see in the following Copy&Paste from above PowerShell console:

If you install Microsoft's "Windows Terminal" from the Microsoft Store (or the Preview version), it comes pre-configured for full Unicode localization. 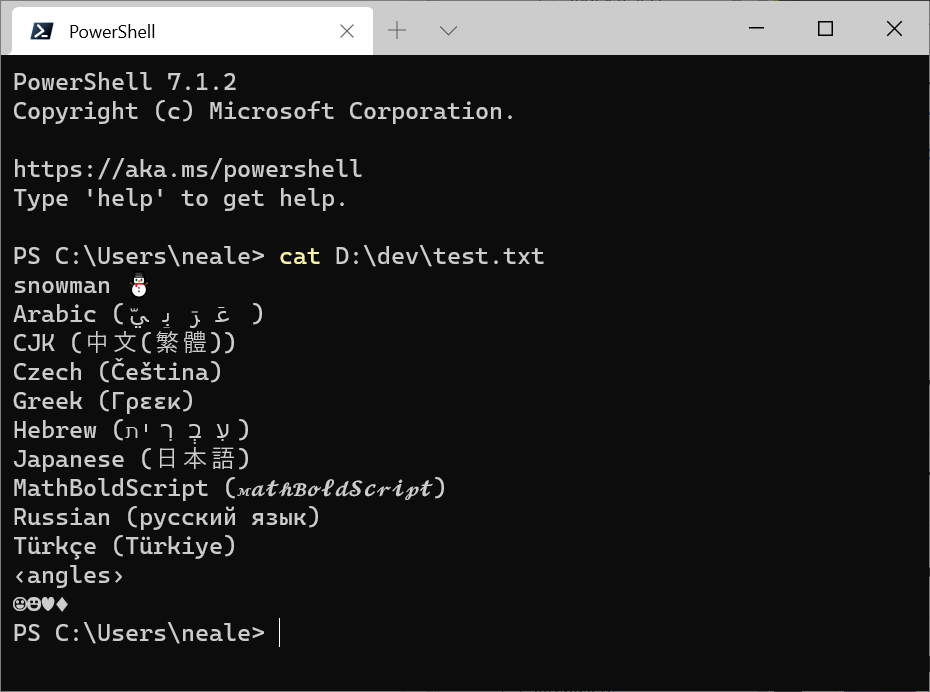 You still can't enter commands with special characters... unless you use WSL! 😍

The Powershell ISE is an option for displaying foreign characters: korean.txt is a UTF8 encoded file:

I was facing a similar challenge, working with the AMAZON translate service. I installed the terminal from Windows store and it works for me now!

Make sure you have a font containing all the problematic characters installed and set as your Win32 Console font. If I remember right, click the PowerShell icon in the top-left corner of the window and pick Properties. The resulting popup dialog should have an option to set the font used. It might have to be a bitmap (.FON or .FNT) font.

Just registered just to clear up the confusion about why "Lucida Console" as font is working in Powershell ISE. Unfortunately I am not able to comment due to missing reputation, so here as Answer:

In normal powershell all characters are displayed in the configured font. Thats why e.g. chinese or cyrillic characters are broken with "Lucida Console" and many other fonts. For chinese characters Powershell ISE changes the font automatically to "DengXian".

You can find out which alternative Font is used for your special character by copying them to Word or a similar program which is capable of displaying different fonts.

686
What is the difference between UTF-8 and Unicode?
895
Setting Windows PowerShell environment variables
426
How to recursively delete an entire directory with PowerShell 2.0?
2813
Determine installed PowerShell version
940
How to run a PowerShell script
2695
PowerShell says "execution of scripts is disabled on this system."
1063
How do you comment out code in PowerShell?
869
How do I concatenate strings and variables in PowerShell?
1404
Why is executing Java code in comments with certain Unicode characters allowed?