Is there a way to lower Java heap when not in use?

I'm working on a Java application at the moment and working to optimize its memory usage. I'm following the guidelines for proper garbage collection as far as I am aware. However, it seems that my heap seems to sit at its maximum size, even though it is not needed.

My program runs a resource intensive task once an hour, when the computer is not in use by a person. This task uses a decent chunk of memory, but then frees it all immediately after the task completes. The NetBeans profiler reveals that memory usage looks like this:

I'd really like to give all of that heap space back to the OS when not in use. There is no reason for me to hog it all while the program won't even be doing anything for at least another hour.

Is this possible? Thanks.

You could perhaps play around with -XX:MaxHeapFreeRatio - this is the maximum percentage (default 70) of the heap that is free before the GC shrinks it. Perhaps setting it a bit lower (40 or 50?) and then using System.gc() might go some lengths to get you the desired behaviour?

There's no way to force this to happen however, you can try and encourage the JVM to do so but you can't just yank memory away as and when you want to. And while the above may shrink the heap, that memory won't necessarily be handed straight back to the OS (though in recent implementations of the JVM it does.)

Short version: Yes you can.

For most applications the JVM defaults are okay. It looks like the JVM expects applications to run only a limited period of time. Therefore it does not seem to free memory on it's own.

In order to help the JVM to decide how and when to perform garbage collection, the following parameters should be supplied:

That's not enough for me. I want more control!

In case the above mentioned parameters are not enough, you can influence the behavior of the JVM regarding garbage collection.

First you can use System.gc() to tell the VM when you believe garbage collection would make sense. And second you can specify which of the garbage collectors the JVM should use:

Memory usage of a Play Framework web application without any optimizations:

As you can see, it uses quite a lot of heap space, and the used space is regularly freed.

In this case the optimizations with parameters only were not effective. There were some scheduled tasks which used rather a lot of memory. In this case the best performance was achieved by using the CMS GC combined with System.gc() after the memory intensive operations. As a result the memory usage of the WebApp was reduced from 1.8 GB to around 400-500 MB.

You can see here another screenshot from the VisualVM which shows how memory is freed by the JVM and actually returned to the OS: 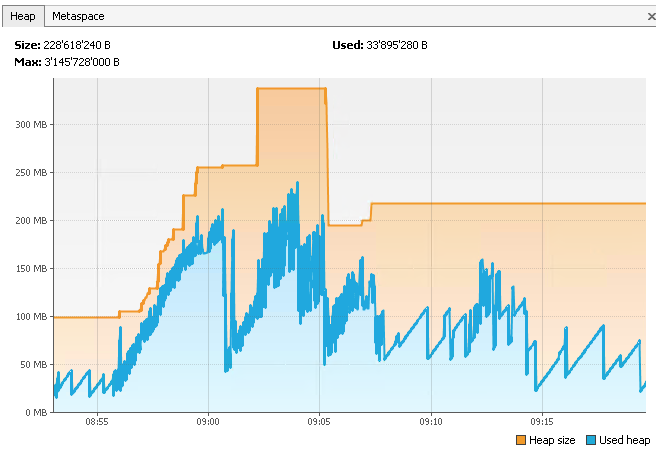 Note: I used the "Perform GC"-button of the VisualVM to perform the GC rather than System.gc() in my code, as the scheduled tasks which consume the memory are only launched at specific times and somewhat harder to capture with VisualVM.

ZGC does not currently uncommit and return memory to the operating system, even when that memory has been unused for a long time. This behavior is not optimal for all types of applications and environments, especially those where memory footprint is a concern. For example: Container environments where resources are paid by use.

One possibility is to have your background java application launch an external jvm instance each hour to run your task. That way only your original jvm application is running between tasks.

If your app is quiescent during periods of inactivity, it's possible the OS will swap out those pages for you, mitigating their pressure on physical memory.

Java best kept secret: -Xincgc It does impact performance but not always that much. Sometimes it does, depends on what you're doing. The incremental garbage collector hands memory back to the system quite well !

The JVM doesn't work that way. You can't give it back to the OS.

As noted by several people since this was written four years ago, you can give memory back to the OS if you give the proper GC settings to the JVM.

Not the answer you're looking for? Browse other questions tagged java memory-management heap-memory or ask your own question.

517
How to deal with "java.lang.OutOfMemoryError: Java heap space" error?
3465
When to use LinkedList over ArrayList in Java?
2267
What's the simplest way to print a Java array?
309
Increase heap size in Java
341
Java heap terminology: young, old and permanent generations?
1040
When to use static methods
318
Could not reserve enough space for object heap
493
How is the default max Java heap size determined?
1215
Which @NotNull Java annotation should I use?
1
Java native memory tracking heap committed much more than total from heap dump