Start WSL Ubuntu in specific or current folder on Windows

But the Ubuntu shell start in /home/techsupp folder by default. Is it possible to force it to start in same folder than the one I use my Ubuntu command?

So in my example I should be in

What I already tried:

I also discover this request on uservoice: https://wpdev.uservoice.com/forums/266908-command-prompt-console-windows-subsystem-for-l/suggestions/13421103-let-us-right-click-open-bash-here-from-explorer?tracking_code=8a8bc624c72a8336565fcd6d5737d712

Please vote for it.

I'm on Windows 10 Home with May Update and have Ubunto 18.04 for WSL installed, I can open the console in any folder with Shift + Right Click and selecting the Open Linux shell here option 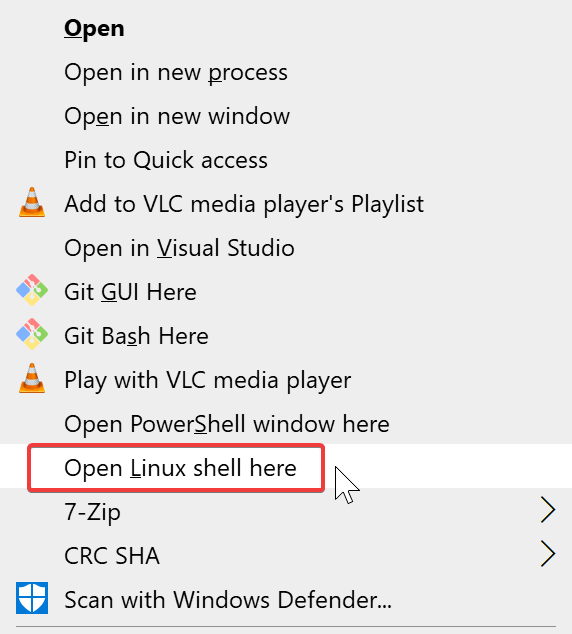 If you check in Task Manager how the explorer "Open Linux shell here" option opens wsl, you can see that there's a "--cd" option.

run <command line>
Run the provided command line in the current working directory. If no
command line is provided, the default shell is launched.

As far as I can tell the effect is the same as running ubuntu, except that it starts in the current directory.

This command works even as a right click open here command in explorer. Adapting from this article:

Now you have a functional "Open Ubuntu here" right click menu in explorer.

The problem I have with wsl is that the wsl bash window doesn't have the Ubuntu icon, even if it starts the Ubuntu distribution.

If you use wsl.exe, it will start WSL in current directory. But the difference between wsl and ubuntu is that if you have installed two or more distros (e,g, Ubuntu and Fedora), the default one will get started. You can set the default to Ubuntu by running wslconfig /setdefault Ubuntu.

seems that there is a very simpel solution.

just add the following in Ubuntu configuration in the profiles.json file

The method that has worked for me is to use the Windows Terminal app and configure it to start in the desired location.

Change <username> to be the name of the user you created on install of Ubuntu 20.04.

with this little script you can execute every command from the directory your Powershell is currently in. It only works if the drive is already mounted to /mnt/ in the subsystem. It doesn't work with network resources.

after you have executed it, you can use it like this:

First, you have to check whether wsl is using ubuntu as default or not. For me it was not. Write the below command on cmd:

If not then Write wsl -s Ubuntu-20.04 to set it as default. Now you can run ubuntu bash from any directory by doing shift + Rightclick as shown Here.

Not the answer you're looking for? Browse other questions tagged windows windows-subsystem-for-linux or ask your own question.

89
How do I use Bash on Ubuntu on Windows (WSL) for my VS Code terminal?
3
Ubuntu on WSL doesn't launch
0
Dockerfile script working in native Ubuntu but not in Windows or WSL
2
dotnet-ef does not exist - Windows 10 WSL (Ubuntu)
0
How to make WSL Ubuntu 1804 understand that WSL is enabled in Windows?
1
WSL issue: "Windows Subystem for Linux has no installed distributions"