to checkout new c++ filesystem feature. However I'm unable to compile even minimal example on my machine:

I was using XCode, CLion and command line while trying to compile it but nothing works, I have Version 9.3 (9E145) with (seemingly proper) project settings, none of which work: 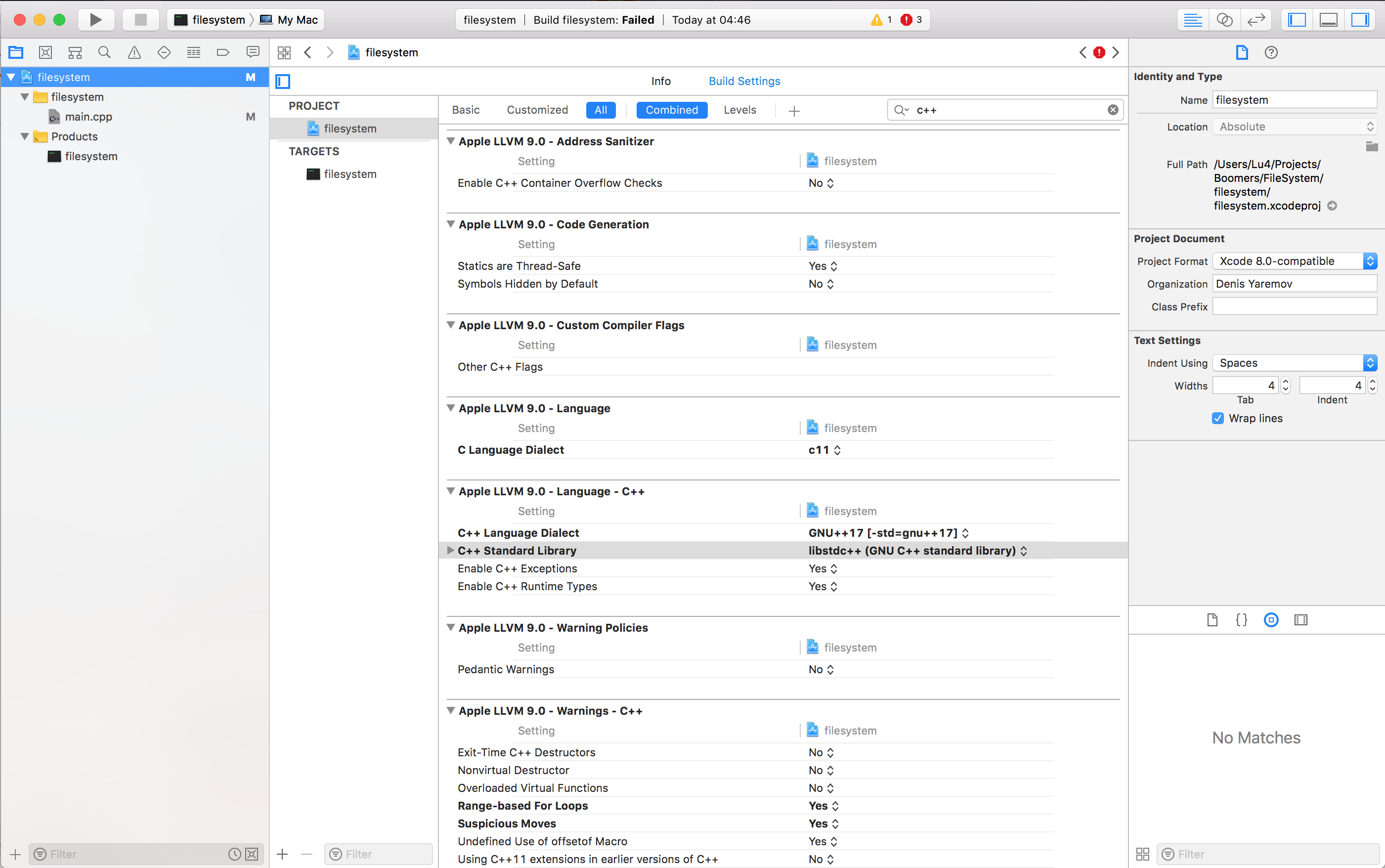 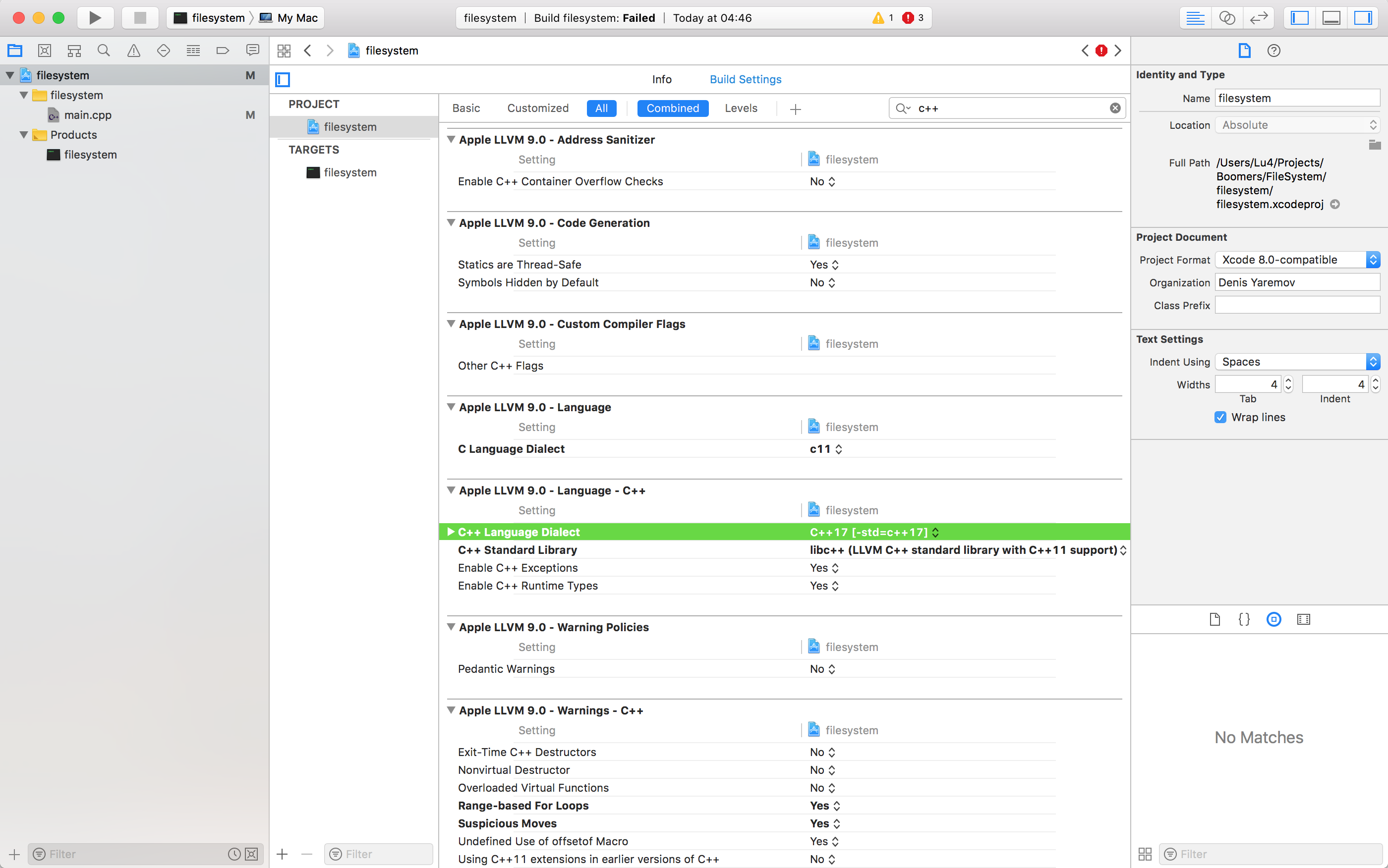 Here is my CMakeLists.txt file for CLion:

Here is an output from > gxx --version:

Nevertheless this is what I get as an output from my IDEs: 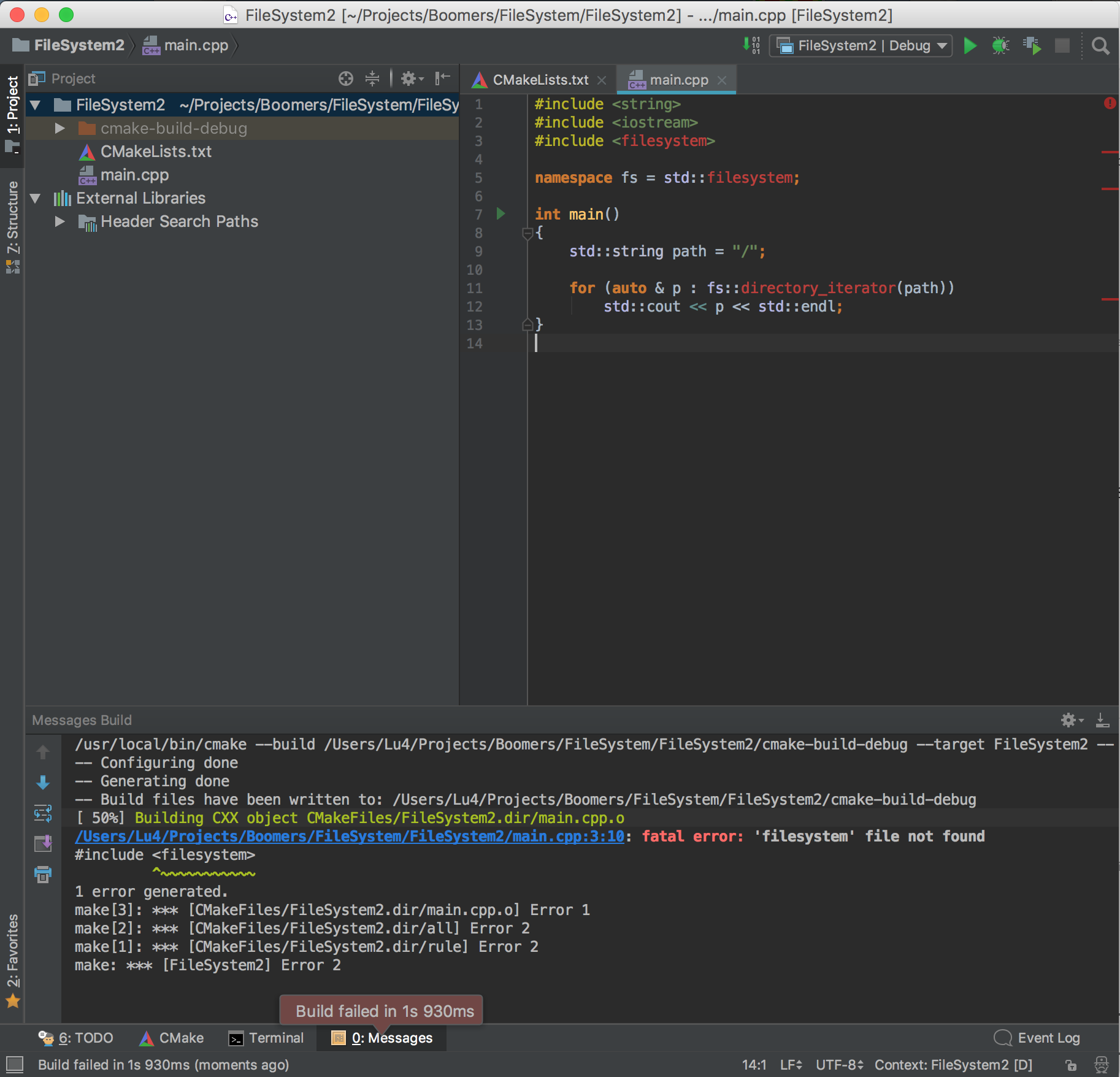 What am I doing wrong, it looks to me that my compiler should support c++17?

As per Owen Morgan's answer I've installed clang (actual install command was brew install llvm) but it now complains about absence of string.h. Any thoughts?

The compiler shipped with Xcode supports C++17 language features but not C++17 standard library features. Looking at your screenshot you will see the standard library support goes up to C++11, and Apple has not yet shipped a version of clang that has stdlib support for either C++14 or C++17.

However hope is not lost! You can download the newest version of clang from the brew package manager.

Then you can compile by setting your cmake compiler flags to be your custom brew version and then running that.

After installing llvm you will need to link your llvm path into your current shell. I have a shell script that I use at work to get this set up properly. Hope this helps.

Clang 6.0 doesn't have <filesystem> included on macOS yet, however you can get <experimental/filesystem>, and link against -lc++experimental, and use std::experimental::filesystem instead of std::filesystem.

Current clang version 7.0.1 supports either <filesystem> or <experimental/filesystem>. In any case, the compiler command line must be slightly different:

Setting up Boost is pretty easy if you're using CMake. Just brew install boost then in your CMakeLists.txt do something like:

The extra verbosity in finding Boost helps, I find, to suppress some warnings CMake would otherwise throw at you.

If you're feeling very fancy, you can use the __has_include define to check if the standard filesystem include is available, and if so, set namespace fs = std::filesystem and fallback to Boost only if the std version isn't available.

As std::filesystem support on macOS with the official compiler and Xcode 11.1 is now limited to Catalina/10.15 deployment targets and up, I want to humbly add ghc::filesystem by myself as an additional option. It was written because I wanted to use std::filesystem on macOS, so it might be worth a try.

It is a header-only feature complete implementation of std::filesystem for macOS, Linux and Windows, works from C++11 to C++17, and it tries to stay close to the standard. It might be a less heavy dependency than boost (if you don't use that already). In the simplest form, just drop the main header file next to your source, include filesystem.hpp, eventually add

and use it like it is std::filesystem. It is also possible to separate parts of the implementation into a cpp by using the additional header files, the readme explains how to do that.

Note: It was implemented with utf8-everywhere in mind, but has an option to enable std::wstring interfaces on Windows as specified by the standard. The std::string_view related functions are limited to C++17, as it doesn't include a backport of std::string_view.
More details can be found in the readme under differences in api.