how to update npm on macOS

For reasons unknown to me, I haven't been able to update to the latest version of npm on macOS (it works fine on Windows). It displays no error, only 'updated 1 package'.

What version of npm do I have?

And it fails to update.

I followed the directions found on this Q&A, completely removing npm and node from my system and reinstalling them from scratch, and it also fails to update. 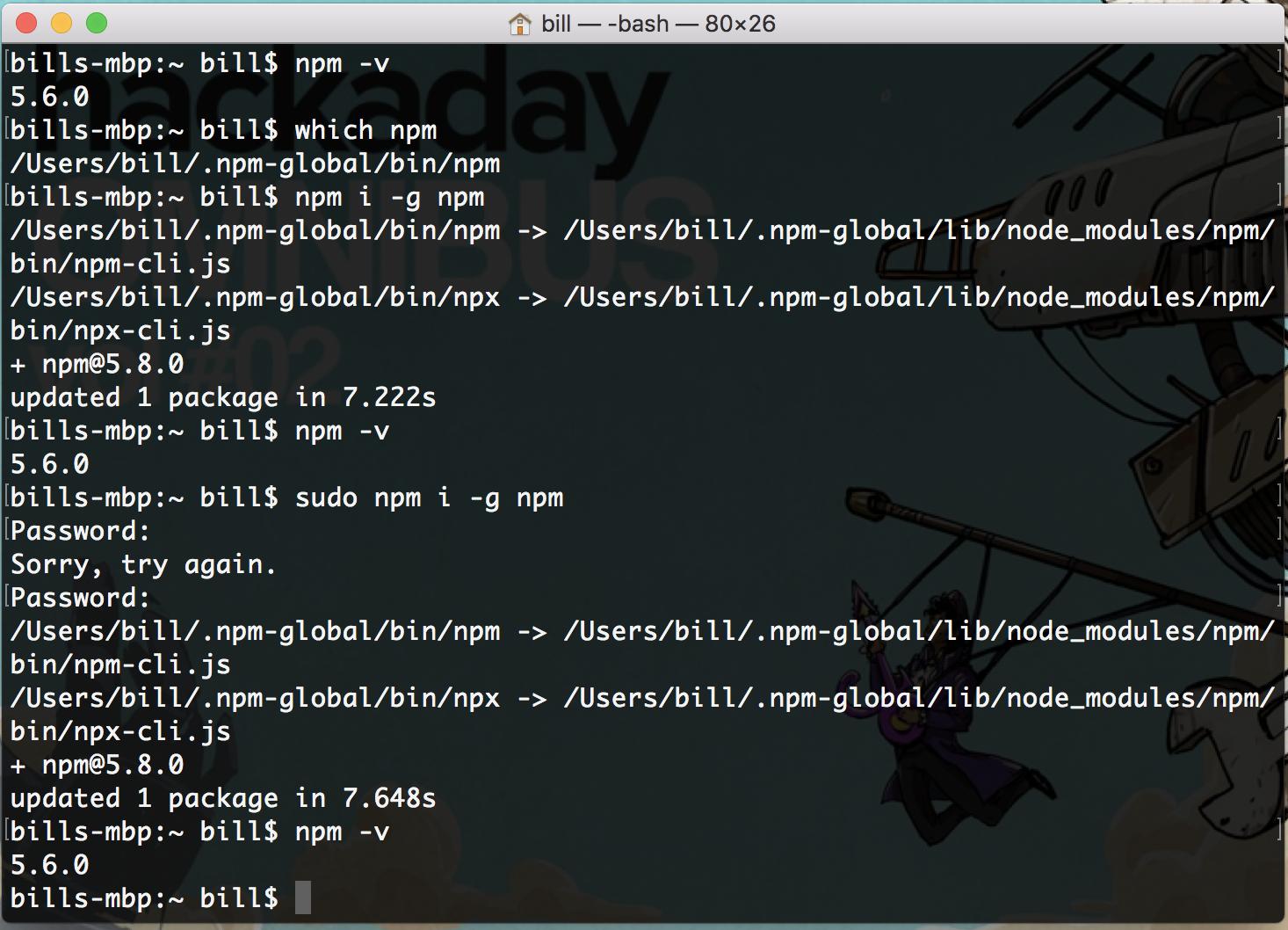 What did I miss? What's going on here?

This works on my mac.

There is a note stated on the docs that depends on your installation method, you might addd some sudo.

(You may need to prefix these commands with sudo, especially on Linux, or OS X if you installed Node using its default installer.)

Perhaps you have already solved this, but here is what I found when I had exactly this issue. I had 2 versions of npm installed.

I verified this as follows:

I worked around the issue by updating the path in my bash profile, but would like to know why (how) I ended up with 2 versions. Here is the update:

In my case, only the following has helped:

EDIT NOV 21: These days, I bypass brew entirely and use "n":

And so I can change between versions too.

In my case, none of the previous answers worked. For me, a working solution was a simple, five-step process.

If npm is not installed, then install it on the Mac with Node.js.

This command uses the old version of npm (installed by Node), to globally install the latest version of npm at ~/.npm-global/. Once installed, close and open a new terminal shell.

Sometimes this doesn't work, so I had to go into finder to delete the /npm/ folder.

If ~/.npm-global/bin does not show up between the colons, then update the path variable. Open up ~/.zshrc in a text editor and add the following line. If you don't use zsh, open the profile for your corresponding shell (i.e. ~/.bash_profile)

Save your changes and close the text editor.

The reason for updating the path variable is because the npm cli suggests you update npm with npm install -g npm which will install npm at a different location than where Node installs npm originally.

I faced the same problem. You might have already installed the npm version, and now it is time to point the new npm version install. You can do that by following below steps.

In my case, I'm using nvm to manage different versions of node. In order to upgrade npm version, I have to

or you can probably use

2 - Edit $PATH to point to your current version of node

Not the answer you're looking for? Browse other questions tagged macos npm or ask your own question.

1608
How do I completely uninstall Node.js, and reinstall from beginning (Mac OS X)
61
brew install npm "npm: command not found"
132
When should i use npm with "-g" flag and why?

1964
How can I update NodeJS and NPM to their latest versions?
405
How can I change the version of npm using nvm?
2740
Find the version of an installed npm package
1608
How do I completely uninstall Node.js, and reinstall from beginning (Mac OS X)
2397
How to update each dependency in package.json to the latest version?
1863
What is the difference between Bower and npm?
2594
What's the difference between dependencies, devDependencies and peerDependencies in npm package.json file?
2783
What is the --save option for npm install?
685
Node Sass couldn't find a binding for your current environment
2971
Git is not working after macOS Update (xcrun: error: invalid active developer path (/Library/Developer/CommandLineTools)