Is there a shortcut to move focus to the sidebar in Visual Studio Code?

I want to get focus there without using the mouse so that I can select another file listed in the sidebar without having to use the mouse.

Ctrl0 is the default binding of View: Focus into Side Bar command that focuses sidebar regardless what it shows at the moment - be it Explorer, Source Control, Extensions or any other pane. (Or reveals its last visible state.)

Zero (0) in this key combination represents character that "English-keyboard-layout" zero key in the top 'numerical' row produces in current regional keyboard layout. It is not the zero key in numpad.

Like most other actions it is easily discoverable either in the Command Palette (F1 or CtrlShiftP):

(N.B. é instead of 0 due to aforementioned regional layout in effect), or in the Keyboard Shortcuts settings page (CtrlK CtrlS):

If you'd like to have this (or other) key combination to act like two way "focus toggle" between editor and sidebar (like Show Explorer behaves), you can alter your settings accordingly using distinct actions with identical key combination differentiated by excluding "when" conditions. Resulting part of keybindings.json would be

These are the different shortcuts to focus on the various components(in order of the icons) of the sidebar.

To toggle the visibility of the sidebar, just press ctrlb 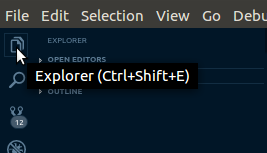 248
Is there a shortcut to hide the side bar in Visual Studio Code?
1
Launch VSC with clean or custom profile