I use Docker toolbox for windows and i`m trying run private docker registry from this documentation https://docs.docker.com/registry/deploying/

But it`s not work for me. Error after this:

I`m thinking that error is something in my docker client.

For information this is my docker info

If i try on mac so everythink is perfect.

Do you know how this error to solve?

Thank you so much for every answers!

Looks like you haven't set the Docker Daemon right. Notice these few lines:

Try to add this line to Docker's daemon.json file and restart the Docker Daemon:

(The host is the hostname of the server hosting my docker registry and port is the port where the docker registry is available. In my case, those are 192.168.99.1:50000)

and then restart docker daemon by doing:

Hopefully this will help anyone having issues getting the insecure-registries fix to work.

did not work for me until I created the file

and put the line

in it and then restarted the docker daemon with

For some reason just doing a sudo systemctl restart docker did not work. It threw an error about trying to restart the service to quickly.

Also for ["host:port"] I used the IP of my Docker registry as opposed to the hostname as I did not have DNS or a hosts file setup to be able to find the registry by hostname.

This drove me absolutely nuts until I stumbled upon the /etc/default/docker bit here.

I am new to Docker and so I don't know if this is new requirement since this initial post was answered or if there was something else I missed when I first setup my registry. Though all I did was to follow the current docs on the Docker site itself.

If you use windows: 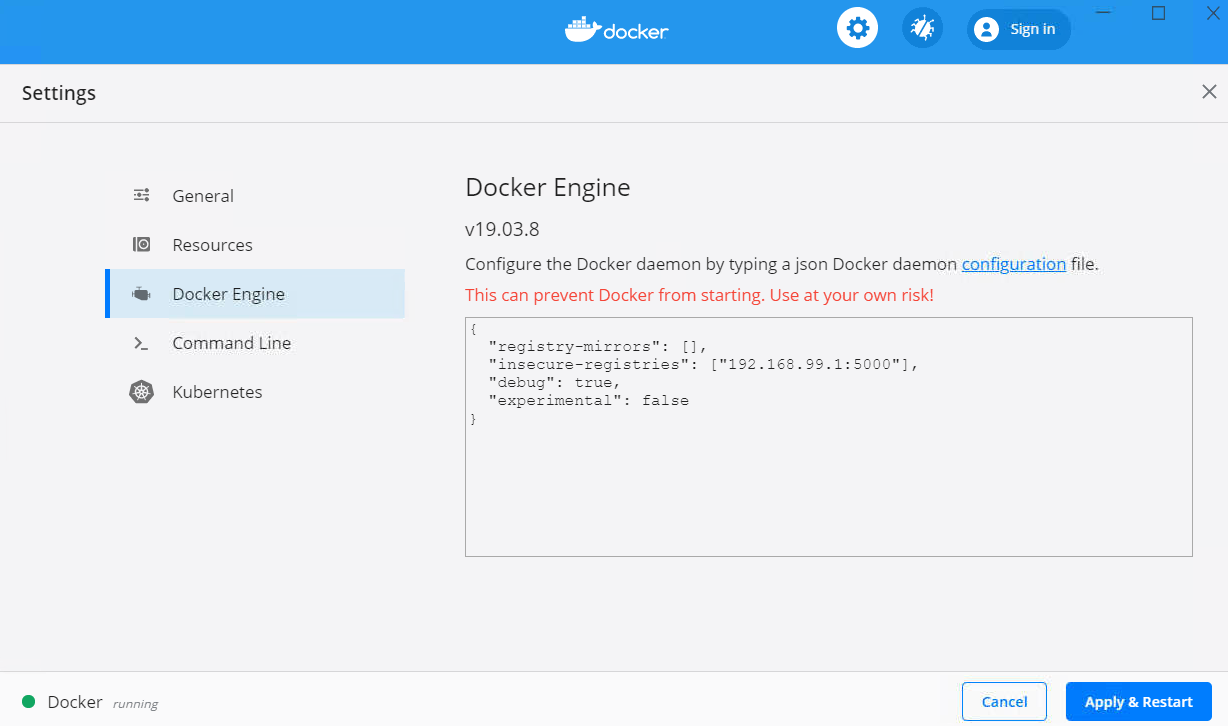 If you are using Docker Desktop for Windows:

Job done, no need to manually edit any files

Maybe someone bumps into this as well again, @user674669 should also have mentioned that the sudo /etc/docker/daemon.json should be set on the client machine that wants to connect to the Docker registry in question.

This allows the client to connect to the server

If you are using minikube in Windows machine along with minikube addons registry.

1.Find the registry IP. It will be same as minikube IP.

necron9x11's answer worked for me. Note that if you're working with a Docker-in-Docker deployment such as containerized Jenkins (https://www.jenkins.io/doc/book/installing/docker/), you can add the "daemon.json" and "docker" files as part of your image build. This way both are included with your deployable dind image supporting the Jenkins image. Just create both files in the same directory with your Dockerfile:

Then the contents of the Dockerfile are:

Lastly build and deploy as usual:

Now your dind container can access the insecure registries specified as ["host:port"] in daemon.json.

If buildkit is enabled (in newer versions it seems to be enabled by default) and adding the insecurite-registries didn't fix it, you may need to either disable buildkit, or add the http:// to the hostnames in insecure-registries.

Documentation of the known issue:

Here is an official page explain for "Test an insecure registry". Solutions:

I have to rm -Rf ~/.docker besides change the daemon.json.

I installed new version of Docker in Ubuntu and none of the approaches works, so I install older docker

and works as normal

I just spent hours trying to debug WSL. It turns out its a combination of having the insecure-registreis right, but also not having DOCKER_TLS_VERIFY set on the other side. Having that set to 0 or 1 broke it, so I had to unset the variable and it worked.

I also faced the same issue. After hours of effort I figured out I need to define insecure registry as follows.

Not the answer you're looking for? Browse other questions tagged windows docker docker-toolbox or ask your own question.

0
Logging into GitHub Container Registry fails with HTTP/HTTPS error
0
How to access Docker Registry publicly from both sub network and outside world
0
Docker repository server gave HTTP response to HTTPS client from Ray
1
Error in pulling Dockerfile from docker registry
0
When I login to Docker Nexus 3 private registry, I get 404 error