Someone, please explain the difference between SwitchMap and FlatMap in terms of Javascript ( in angular perspective, rxjs 5)

SwitchMap only emits the latest observable value and cancels the previous observable.

flatMap collects all individual observables and returns all observables in a single array without caring about the order of observable. works asynchronously.

how does mergeMap works differently from above?

someone, please explain with an example.

Taking this from a previous answer:

Here is an example of how each of the operators behaves when the source is immediate items (0,1,2,3,4) and the map function creates an Observable that delays each item by 500ms: 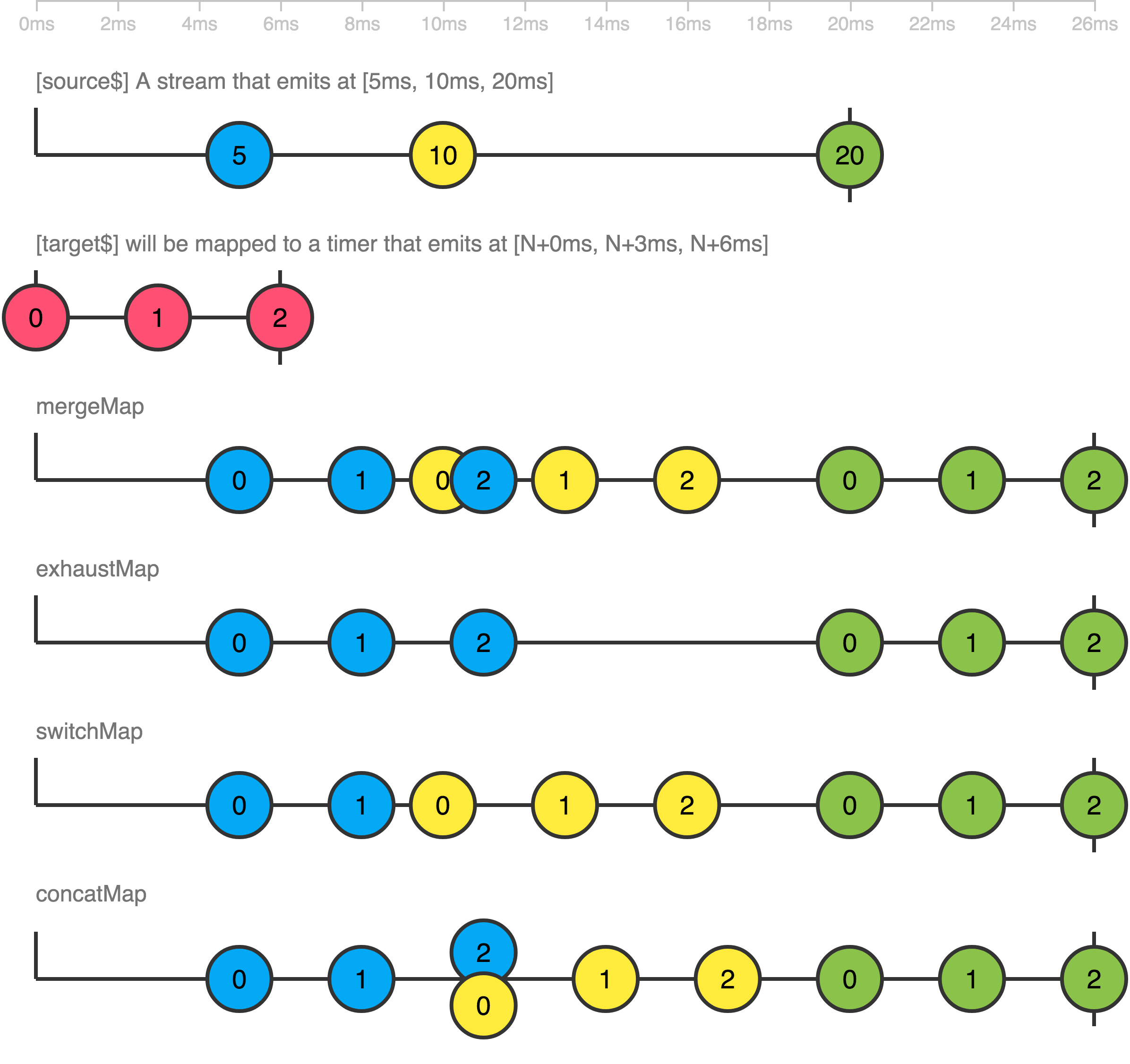 Play with this marble diagram here: "mergeMap vs exhaustMap vs switchMap vs concatMap"

Already having all these awesome answers, I wanted to add a more visual explanation

Hope it helps someone

@ZahiC, cool answer - I like the use of functional composition in the code sample. If I may, like to borrow it to illustrate a couple of extra points using timed observables.

To contrast them, my code sample runs them in pairs, outputting values in the form [outerValue,innerValue]. I have added intervals to the test, and changed the inner delay so that there's some overlap in timing (formula used is delay((5-x)*200)).

These both output all values, the difference is the ordering.

From the output, mergeMap outer emit can be delayed in the sequence, but concatMap follows strict outer emit sequence.

These both throttle the output.

From the output, switchMap throttles any incomplete inner emits, but exhaustMap throttles following emits until the earlier ones complete.

I threw this in because switchmap is often used in SO answers where really mergeMap should be used.

The main takeaway is that the switchMap output is unpredictable depending on the timing of the inner observable, e.g if the inner is an http get the results can depend on connection speed.

Let's say you are subscribed to a weather channel. weather announcer reads the report that passed to him after run through several operations.

Here is one more way of thinking about the difference between the different types of maps. This helped me get my head around it. I hope it might help others.

This is unlike the other maps because it does not introduce another source of observable. It just transforms an incoming value to another value.

So output from the lower case source, going through a Map which transforms input to upper case, would just be:

Like switchMap except that Concat waits until each source completes before moving on to the next.

Like Concat Map except that it will ignore any inputs that come in while it is still completing the last source. The example below assumes that the alpha inputs "b" and "d" both came in while the previous mapped source was still completing, so they were ignored.

Like concatMap in that each source runs to completion, but a new source can start up while other sources are still going - so the sequences overlap.

This is at the beginning a bit long to grasp, at least for me.

flatMap IS ANOTHER NAME FOR mergeMap - mergeMap method accepts an optional parameter concurrency, which defines how many Observables can be subscribed at the same time

switchMap works as you have described (see this nice article for more details https://blog.angular-university.io/rxjs-switchmap-operator/)

I made a little demo/example for using the requested operators a while ago.

It will print the results below the selection.

Not the answer you're looking for? Browse other questions tagged javascript angular rxjs observable or ask your own question.

0
Make 2 aynchronous calls and pass the response from the first to the second
56
Rxjs One Observable Feeding into Another
13
How to dispatch multiple actions in ngrx/effect (redux-observable)?
5
Angular ngrx + Firebase OAuth action called but effect not
0
angular - Error handling with nested subscriptions - Chain multiple api-calls
1
Dependent requests with rxjs error: Observable {_isScalar: false, _subscribe: f}
1
How to use and maintain multiple subscriptions inside another subscription?