I am interested in how to take musical notes (e.g A, B, C#, etc) or chords (multiple notes at the same time) and write them to a wav file.

From what I understand, each note has a specific frequency associated with it (for perfect pitch) - for example A4 (the A above middle C) is 440 Hz (complete list 2/3 of the way down This Page).

If my understanding is correct, this pitch is in the frequency domain, and so needs the inverse fast fourier transform applying to it to generate the time-domain equivalent?

What I want to know is:

Thanks for any help you can give. If giving code examples, I am using C# and the code I am currently using to create wav files is as follows:

This creates (somehow) a constant sound - but I don't understand completely how the code correlates with the result.

You're on the right track.

Let's take a look at your example:

OK, you've got 11025 samples per second. You've got 60 seconds worth of samples. Each sample is a number between 0 and 255 which represents a small change in air pressure at a point in space at a given time.

Wait a minute though, sine goes from -1 to 1, so the samples go from -256 to +256, and that is larger than the range of a byte, so something goofy is going on here. Let's rework your code so that the sample is in the right range.

Now we have smoothly varying data that goes between 1 and 255, so we are in the range of a byte.

Try that out and see how it sounds. It should sound a lot "smoother".

The human ear detects incredibly tiny changes in air pressure. If those changes form a repeating pattern then the frequency at which the pattern repeats is interpreted by the cochlea in your ear as a particular tone. The size of the pressure change is interpreted as the volume.

Your waveform is sixty seconds long. The change goes from the smallest change, 1, to the largest change, 255. Where are the peaks? That is, where does the sample attain a value of 255, or close to it?

How do chords work? Are they the average of the pitches?

Suppose you wanted to make an octave below your sample. What's the frequency? Half as much. So let's make it happen half as often:

Note it has to be 2.0, not 2. We don't want integer rounding! The 2.0 tells the compiler that you want the result in floating point, not integers.

If you do that, you'll get peaks half as often: at i = 4, 16, 28... and therefore the tone will be a full octave lower. (Every octave down halves the frequency; every octave up doubles it.)

Try that out and see how you get the same tone, an octave lower.

Now add them together.

That probably sounded like crap. What happened? We overflowed again; the sum was larger than 256 at many points. Halve the volume of both waves:

If you play that you should get both tones at the same time, one an octave higher than the other.

That last expression is complicated and hard to read. Let's break it down into code that is easier to read. But first, sum up the story so far:

So let's put it together:

And there you go; now you can generate any tone you want of any frequency and volume. To make a chord, add them together, making sure that you don't go too loud and overflow the byte.

How is the length of time to play each note specified, when the contents of the wav file is a waveform?

how is the result of multiple notes being inverse FFT'd converted to an array of bytes, which make up the data in a wav file?

The reverse FFT just builds the sine waves and adds them together, just like we're doing here. That's all it is!

any other relevant information relating to this?

See my articles on the subject.

Parts one through three explain why pianos have twelve notes per octave.

Part four is relevant to your question; that's where we build a WAV file from scratch.

And frankly, it is a lot easier to get the math right if you do it in signed shorts rather than unsigned bytes.

Part five gives an interesting example of an auditory illusion.

Also, try watching your wave forms with the "scope" visualization in Windows Media Player. That will give you a good idea of what is actually going on.

I have noticed that when appending two notes together, you can end up with a popping noise, due to the transition between the two waveforms being too sharp (e.g ending at the top of one and starting at the bottom of the next). How can this problem be overcome?

Essentially what's happening here is there is an instantaneous transition from (say) high pressure to low pressure, which is heard as a "pop". There are a couple of ways to deal with that.

If the phaseshift is zero, obviously that is no change. A phase shift of 2π (or any even multiple of π) is also no change, since sin has a period of 2π. Every value between 0 and 2π shifts where the tone "begins" by a little bit further along the wave.

Working out exactly what the right phase shift is can be a bit tricky. If you read my articles on generating a "continuously descending" Shepard illusion tone, you'll see that I used some simple calculus to make sure that everything changed continuously without any pops. You can use similar techniques to figure out what the right shift is to make the pop disappear.

Assuming there is a solution, what is it? You have an ending sample, call it y, and you want to find the phase shift x such that

when i is zero. So that's

However, that might not be quite right! Suppose you have 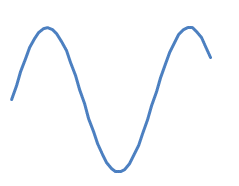 and you want to append 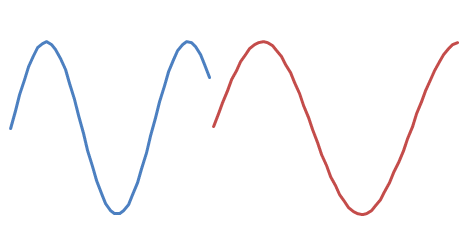 There are two possible phase shifts: 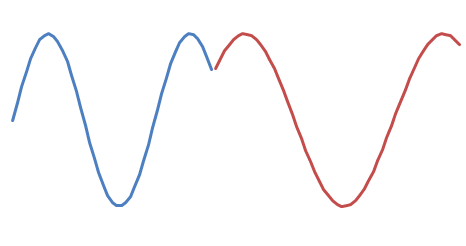 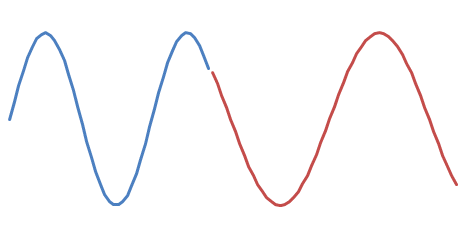 Take a wild guess as to which one sounds better. :-)

Figuring out whether you are on the "upstroke" or the "downstroke" of the wave can be a bit tricky. If you don't want to work out the real math, you can do some simple heuristics, like "did the sign of the difference between successive data points change at the transition?"

If you are modeling something that is supposed to sound like a real instrument then you can get good results by changing the volume as follows.

What you want to do is have four different sections for each note, called the attack, decay, sustain and release. The volume of a note played on an instrument can be modeled like this:

The volume starts at zero. Then the attack happens: the sound ramps up to its peak volume quickly. Then it decays slightly to its sustain level. Then it stays at that level, perhaps declining slowly while the note plays, and then it releases back down to zero.

If you do that then there's no pop because the start and the end of each note are at zero volume. The release ensures that.

Different instruments have different "envelopes". A pipe organ, for example, has incredibly short attack, decay and release; it is all sustain, and the sustain is infinite. Your existing code is like a pipe organ. Compare with, say, a piano. Again, short attack, short decay, short release, but the sound does get gradually quieter during the sustain.

The attack, decay, and release sections can be very short, too short to hear but long enough to prevent the pop. Experiment around with changing the volume as the note plays and see what happens.

You are on the right track. :)

You do not need to do a inverse FFT (you could, but you would need to find a lib for it or implement it, plus generating a signal as input to it). It is much easier to directly generate the result we expect from that IFFT, which is a sine signal with the given frequency.

The argument to the sine depends on both the note you want generated and the sampling frequency of the wave file you generate (often equal to 44100Hz, in your example you are using 11025Hz).

NOTE: I have not tested this to verify the correctness of the code. I will try to do that and correct any mistakes. Update: I have updated the code to something that works. Sorry for hurting your ears ;-)

Chords are combination of notes (see for example Minor chord on Wikipedia). So the signal would be a combination (sum) of sines with different frequencies.

Those tones and chords will not sound natural though, because traditional instruments does not play single frequency tones. Instead, when you play an A4, there is a wide distribution of frequencies, with a concentration around 440 Hz. See for example Timbre.

Nobody has yet mentioned the Karplus Strong plucked string algorithm.

First, what frequency do you want to simulate? Let's say concert pitch A = 440Hz

Let's round that to the nearest integer: 100, and create a circular buffer length 100.

So it will hold one standing wave of frequency ~440Hz (note it is not exact, there are ways around this).

Fill it with random static between -1 and +1, and:

It is an amazing algorithm because it is so simple and generates a super sound.

Frequencies close to 440Hz (or 2*440Hz, 3*440Hz etc) will create constructive interference with themselves, as they pass around the ring again and again. So they will be preserved. Other frequencies will destructively interfere with themselves.

So averaging can be thought of as very simple lowpass filter.

There are complications of course, having to choose an integer buffer length forces a quantisation of possible frequencies, which becomes noticeable towards the top of the piano. Everything is surmountable but it gets hard!

JOS as far as I can see is the world's leading authority on synthetic tone generation, all roads lead back to his website. But be warned, it gets tricky very fast and requires University level maths.

Not the answer you're looking for? Browse other questions tagged c# audio wav or ask your own question.

3
RIFF WAV header format 2014 update?
0
How to generate different sound frequencies?
0
Frequency related sine wave generator on embedded system
-1
Create .wav from multiple sine waves and play all at once
0
Simulate button presses with guitar frequency c#
0
How can I get Audiere to output to a file?